Thanks for making our Day!

With hundreds of events involving countless thousands of people all over the country, the fifth annual #TableTennisDay was arguably the busiest yet. 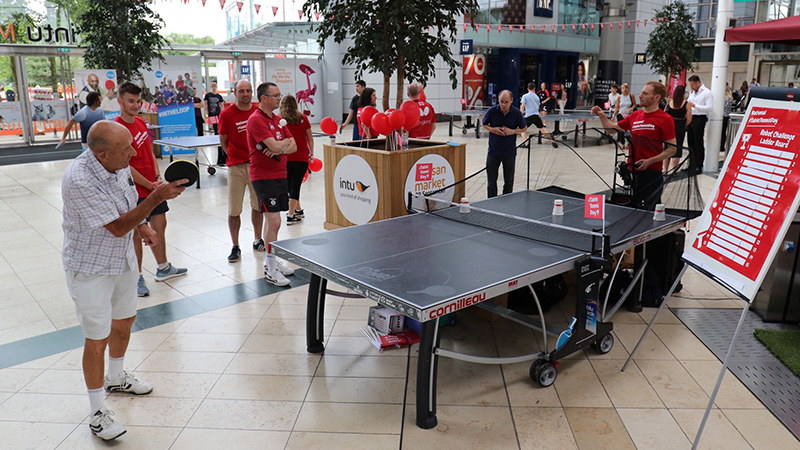 With hundreds of events involving countless thousands of people all over the country, the fifth annual #TableTennisDay was arguably the busiest yet.

Clubs, schools, workplaces, community groups and assorted other venues including a museum and a cruise ship all got involved on a day when everyone comes together to celebrate our sport and – most importantly – to pick up a bat and play.

Here’s a round-up of just a small number of social media posts and photos from the day, starting with one of our star guests in Milton Keynes, Aaron McKibbin, plus a special message from Table Tennis England Chairman Sandra Deaton and the England squad at the European Youth Championships in Romania!

Had good fun with @TableTennisENG and @MariaTsaptsinos for #TableTennisDay playing with the public and even trying virtual reality tt as well as trying to play on a table made of snow. Hope everyone enjoyed!

Fred.Olsen Cruise Lines, one of our membership benefits partners, organised tournaments on four of their ships, including the Balmoral.

St Leonards Academy Junior League celebrated by inviting senior players  of Hastings and District TTA along to their sports hall for a joint practice  session. Thirty players, evenly split between juniors and seniors and including guest appearances from Sussex-based England U21 players Josh Bennett and George Hazell, were put through their paces by for two hours of non-stop table tennis.
Action from an event at Dane Court Grammar School in Broadstairs:

And from Leeds Grand Mosque:

At Laleham Gap School in Ramsgate, there was, among other events, a staff-versus-pupils tournament, which was won by the Primary pupils by a margin of 36:15, telling staff they need to practise! The Secondary pupils also ended up comfortable winners – after 67 matches pupils won 46: 21.

There was also a ‘Hit Mr Ursell’ competition, a target game named after their school coach and actually involving plastic figures rather than the teacher!

At the Redweb agency in Bournemouth, leading Junior player Matthew Daish gave a mastclass to around 30 people at a lunchtime session.

We’re celebrating #TableTennisDay with our residents in House of Sport today! Thanks to Alice @TableTennisENG for organising! pic.twitter.com/QTgRWjUcb9

To celebrate #tabletennisday, here are two of our favourite table tennis stars returning to GOSH to visit patients and staff. Shout out to past patients and Paralympic medalists @WillBayleytt and @Rosswilsontt! ☺️ pic.twitter.com/pxovmWbPdR

Fit For Me Liverpool

This lunchtime we got involved in #TableTennisDay with a quick game on our slightly improvised table! @TableTennisENG pic.twitter.com/1LJOQsh3Cq

Busy morning @BromptonAcademy for #TableTennisDay We will be running sessions at break and lunch too! pic.twitter.com/xr82fKYdpG

Two of the youngest boys on our IOW TT camp demonstrating 2BH 2FH exercise – well done guys. It’s not always easy having to do the demonstration infront of others #resilience #confidence – National #TableTennisDay pic.twitter.com/SlSvTBIzCn

It’s #TableTennisDay so we’re throwing it back to Team England winningat Gold Coast 2018.

What a day at St Johns! It’s been great fun having you all in to ‘Challenge a Celeb’ with @PingLiverpoolTT. Happy #TableTennisDay! pic.twitter.com/egHEEKMM8J

#nationaltabletennisday in #Bedford. 40 people played before lunch time on another lovely sunny day in Harpur square with @randdcoaching. Play for free and find out about our loop tables, local leagues and all our other community sessions and clubs. #sportforall #TableTennisDay pic.twitter.com/0mxLcP2OZw

Anyone for Whiff Whaff? Some Ping Pong fun for #TableTennisDay as our staff play “Shoe can play that game”, “Buck-IT”, #Beattheboss and Tennis Table. pic.twitter.com/1S7LhzM5IW

To celebrate national #TableTennisDay MK Community Foundation are getting into the swing of things and playing some games in Fred Roche Gardens! @mk_ping pic.twitter.com/XK7uFAF4ij

It’s #TableTennisDay so General Manager for Facilities Management Rob has been outside Royal Derby Hospital challenging visitors to a game of table tennis. One patient said: ‘This is great, it’s distracted me from the worry of feeling poorly’ #TeamUHDB pic.twitter.com/5zIW8ZHKMD

It will be no surprise to anyone who has visited our office that we are celebrating #tabletennisday Here’s @ChrisMarston12 & @helenhshaw in action! pic.twitter.com/PVKC7ShjJf

We decided that seeing as we enjoy (un)friendly games of table tennis all year, we needed to celebrate #TableTennisDay right with an office tournament . Winner earns the whole offices respect… We take play very seriously here at Datatel. #WednesdayMotivation pic.twitter.com/2ARg9VbAIg

Claire Minter from @bbcmerseyside enjoys a bit of ping pong in #Widnes during #tabletennisday – We think she is a natural! pic.twitter.com/PKc0hZb9T9