Wensum and Draycott proved worthy Premier Division winners of the respective girls’ and boys’ competitions as the Junior British League came to a conclusion at Derby Arena this weekend. 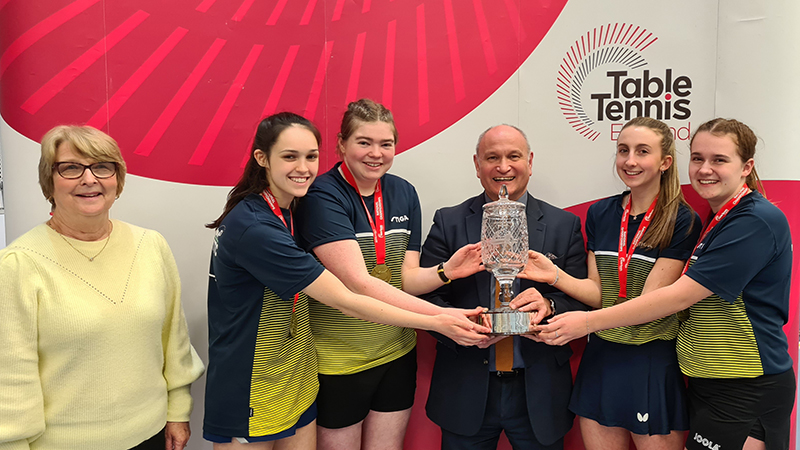 Wensum and Draycott proved worthy Premier Division winners of the respective girls’ and boys’ competitions as the Junior British League came to a conclusion at Derby Arena this weekend.

Wensum clinched a 100% record in winning the girls’ Premier and conceded only 10 individual matches across the two weekends.

None of those were by Mari Baldwin, who swept all before her, winning all 20 matches to top the averages.

Three of Wensum’s matches on weekend two were won by 4-2 margins, against Ackworth eBaTT, Draycott and divisional runners-up Kingfisher.

Against both Draycott and Kingfisher, the champions were never behind but had to win the final match to snuff out any hopes their opponents had of a draw. Lara Whitton beat Erin Green in the final match of the Draycott tie and then saw off Millie Rogove in the last match against Kingfisher.

Draycott were in superb form all weekend in the boys’ Premier – winning four matches by 5-1 margins and the other 6-0.

Such was the dominance of Draycott that their winning margin in the division was seven points, rendering their last few matches academic in terms of deciding the title.

That is not to say the champions were without challenges and awkward moments – Elias Sjogren of Grantham College defeated Connor Green 3-2 (14-12 in the fifth) to make the overall match score 1-1 in the second round on Saturday. Sjogren also took Toby Ellis the distance, going down 11-9 in the fifth.

Ellis had several more five-setters – beating Archway Peterborough’s Jakub Piwowar 14-12 in the fifth, but going down to Joshua Bruce of Fusion.

The final round against runners-up Ormesby saw the north-easterners take the lead when Ben Piggott defeated Green in four. But Draycott claimed the next five, including three matches in a row which went to a decider – Ellis defeating both Joshua Green and Piggott and Rhys Davies prevailing against David Gofton.

The averages were topped by Gabrielius Camara of Fusion, who won all 10 of his matches on weekend 1 but did not play on the second weekend. Draycott’s Davies won 14 out of 15 for an average of 93.33%.

Brighton were girls’ Division One champions by three points ahead of runners-up Wensum II and also Ormeau.

Brighton did drop points in two matches which finished as draws, against Draycott II and Ormeau – in the former, they led 2-0 but trailed 3-2 before Jodie Morris levelled by defeating Amillia Baker.

Ormeau clinched the boys’ Division One title by two points ahead of Ackworth eBaTT, the two outstanding teams in the division finishing well clear of the pack.

Ormeau did drop a point in round 7, when they were held to a 3-3 draw by Grantham College II, who led 2-0 and 3-2 before Max Skelton rescued the Irish team with a 3-2 victory over Samuel Cooper.

Nevertheless, the final showdown between Ormeau and Ackworth was winner-take-all, and it went the way of Ormeau thanks to a 4-2 victory. They were never behind, taking a 2-0 lead before Louie Evans fought back for Ackworth with a 3-2 win (12-10 in the fifth) against Jonathan Mooney. Further victories for James Skelton and Mooney clinched the title, though Evans completed his personal double in the match with a 3-0 win over Max Skelton.

The top four in the averages were all from Ormeau or Ackworth, but it was James Skelton who led the standings on 90% thanks to 18 wins out of 20.

Cippenham took girls’ Division Two by four points ahead of Ormesby and the champions were unbeaten, their only dropped point coming against their closest rivals in the final round.

Ormesby led 2-1 and 3-2 in that tie, but Rachael Iles’ defeat of Eve Witterick ensured a point and an unbeaten season for Cippenham.

Her team-mate Hannah Silcock was the star of the division, boasting a 100% record from the full complement of 20 matches.

Boys’ Division Two was won by Greenhouse by a margin of three points ahead of Mid-Ulster. The Londoners won all five matches over the weekend, including a clinching 4-2 victory over their nearest rivals in the final round.

Ulster fought hard in that match, taking a 1-0 lead and later levelling at 2-2 before victories for Krish Chotai over Aedan McGivern and Howard Onweng over Joe Sheard saw Greenhouse come out on top.

There was a perfect 10 in girls’ Division Three for Woodford Wells, finishing a whopping nine points clear of Draycott IV.

Despite that, they did not have things all their own way as four of their five matches on weekend two were won by 4-2 margins.

For the champions, Mabel Shute won 19 out of 20 to top the averages, one win ahead of team-mate Mia Lakhani.

Grantham College III ran away with boys’ Division Three, winning all five ties across the weekend to finish unbeaten and with a total 19 points, seven clear of Greenhouse II.

Their spearhead was Joseph Dennison, who won 19 of his 20 matches in total for a 95% average. Team-mate James Vella Vidal only played weekend two, but won nine of his 10 matches.

Division Four in the boys’ competition went the way of Britannia, who edged out Fusion III by a solitary point.

The only point dropped by the champions over the weekend came in a 3-3 draw against Brighton in the ninth round. That gave Fusion hope going into the final round, but Britannia won that meeting 4-2 and were never behind.

Of the regular players, the leading average went to Isaac Kingham of Britannia, who won 16/18 for a rate of 88.89%.

Division Five was won by Greenhouse III, five points clear of Cippenham – though the champions were defeated 4-2 by their closest rivals in the first round of the weekend and were later held 3-3 by Wood Green.

Bribar Cleeve Park, nearest challengers after the first weekend, saw their form fail to hold up as they fell away to finish fourth.

Fusion IV’s Jesse Bath won all eight of his matches in the division, while Cippenham’s William Saint had the best record of the more regular players with 15/17 (88.24%).

Dundee were unbeaten across the weekend with three wins and two draws, against Smash Kettering and Sophia Gardens.

Sophia Gardens’ Harri Docherty won an impressive 18 out of 18 for a 100% average, a rate matched by Dundee’s Nathan Hogg, who won all 10 matches on weekend 2 having not featured on the first weekend.

There were Irish winners in Division Seven, as Loop Dublin finished four points clear of Kingfisher – a 100% record across the weekend culminating with a 5-1 victory over the runners-up.

Division Eight saw a perfect 10 for Draycott III, their 20-point haul across the entire competition giving them a seven-point cushion over Ellenborough in second.

Draycott dropped only eight individual matches in total – four of them after the eight-team division split in two.

Fred Jones and Joseph Cooper respectively lost one and two matches out of 18 over the weekend, but Kacper Piwowar of Torbay led the averages with 19 out of 20 (95%).