Joola Plymouth leapfrogged Fusion to claim the Premier Division crown as the Women’s British League came to a pulsating conclusion. 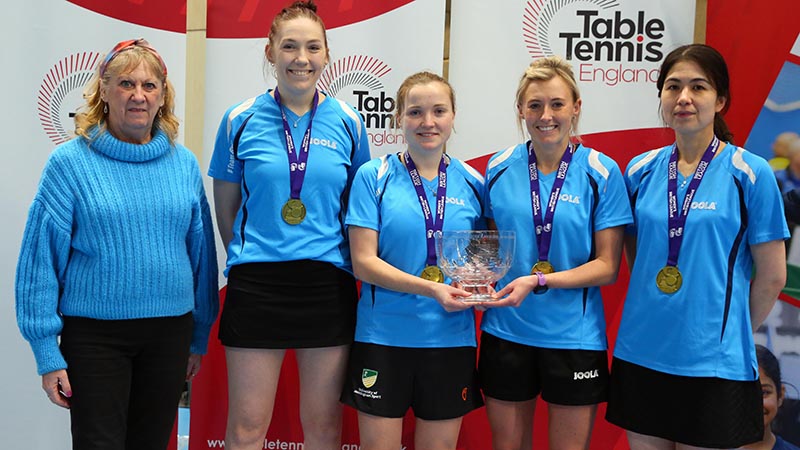 Joola Plymouth leapfrogged Fusion to claim the Premier Division crown as the Women’s British League came to a pulsating conclusion.

Player of the Weekend went to Jodie Morris of Brighton, while Colebridge II from Division Two were the Team of the Weekend. Kim Mudge received the Solihull Trophy for a coach, official or player who has most enhanced the WBL this season, after receiving the most nominations from clubs.

Photos by Mike Rhodes – view more on our Flickr page.

Fusion held a one-point lead over Plymouth going into the second weekend of action at WV Active in Wolverhampton, so things always seemed likely to lead up to a winner-take-all clash in the final round of matches.

The following round saw Colebridge go one better against Fusion, coming from 2-1 down to earn a 4-2 victory thanks largely to a double from Lara Whitton, who won both her matches in a deciding game. Marriott and Sara Williams won the fifth and sixth ties respectively to complete victory.

The leading two teams both won in round nine, meaning it was all square at the top going into that decisive clash, and Fusion took first blood as Maria Engelson beat Collier in three.

Colebridge ended up in third but were unbeaten across the weekend with four victories and that draw with the champions.

It was a double celebration for Joola Plymouth as their second string won Division One by a point, ahead of Draycott firsts.

The champions actually lost to Draycott, but were otherwise unblemished across the weekend and had enough in hand from the first weekend.

It was 4-2 to Draycott in the meeting between the eventual top two – in round 8 – with wins for Erin Green over Emily Haskell and Abbie Milwain over Gemma Kerr taking Draycott to victory after the match was poised at 2-2 after the first four ties.

Draycott II, who had been in second place and level on points with Plymouth going into the weekend, held their club-mates to a 3-3 draw in the first match of the weekend, but defeats to Halton II and, in the final round, to Plymouth, meant they dropped to third place, three points off the top.

Plymouth’s Marketa Myskova reigned supreme in the averages, winning all 20 of her matches across the two weekend. Scarlett Anders won 15 out of 16.

In Division Two, Fusion II rather ‘fell over the line’ in winning the title. Leading by three points after a 100% win rate on weekend one, they drew one and lost two of their matches this time, but still had enough to stay two points ahead of Brighton.

In a tight division – there was not a single 6-0 victory on weekend two – Brighton were unbeaten over their five matches to move up from fourth place at the start of play.

That included a 4-2 triumph over Fusion in Round 8, but there was just too much ground to make up on the leaders.

In the averages, Weronika Bozek of Fusion won all eight of her matches, but the best of the regulars across both weekends was Teresa Bennett of Brighton, whose 16/18 win ratio gave her an average of 88.89.

Division Three was won at a canter in the end by Wensum, who finished five points ahead of Drumchapel Glasgow II.

The sides had been level at the top after weekend one, on nine points each, but Wensum opened a gap by winning their two remaining matches before the divisional split, while both Drumchapel and third-placed Draycott III dropped points.

Not surprisingly, Wensum players scored well in the averages –Key won 10 out of 10 and Barnard 11 out of 12 before the split and Key added four more wins out of four afterwards, while Barnard added another five victories from six matches.

In Division Four, Ellenborough took the title, though they lost the flawless record from the first weekend.

In fact, both of the top two were unable to find the same form – Ellenborough drawing two and losing one across the weekend and Cippenham B picking up only one victory, which allowed St Neots past them into second place.

Ellenborough’s form held up after the split as they won two and drew one, meaning they finished two points ahead of St Neots.

Of the players who played more than half the matches, the leading average was for Rebecca Savage, who won 12 out of 14 before the split and then all six afterwards.