The two Team World Cup finals were not just about China and Japan – there was an English presence too, among the umpires. 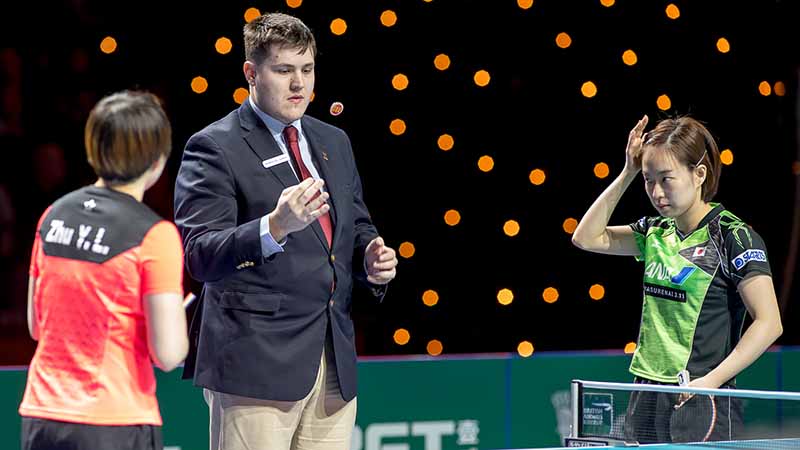 The two Team World Cup finals were not just about China and Japan – there was an English presence too, among the umpires.

Josh Reynolds was one of the officials for the women’s final, while Brian Jackson was in the chair for the men’s final at the Copper Box Arena.

Both are currently undergoing a period of assessment to become Blue Badge Umpires – the highest international qualification.

And they both acknowledge the chance to officiate some of the best players in the world was an important part of their learning process.

Reynolds, 24, said: “It was a nervous experience but a good one. You’ve got to enjoy it while you’re doing it.

“You just forget about the crowd once the lights go dark – all you can see is the table and that’s what your mind is focused on.

“I’ve never done a major final before, and you realise how important it is to get things right, including all the presentation aspects and how you deal with the players.”

Reynolds showed a yellow card to China’s world No 2 Zhu Yuling for taking too long to serve, something the player agreed was justified.

Jackson, who was a technical official at the London 2012 Paralympics, said: “I felt very fortunate to be chosen to go and I really didn’t expect to do a final – I thought I’d be lucky to get a semi-final.

“I’m not usually a nervous person, but when I walked out to the table, my head did spin a little bit. I’ve never umpired players of that standard before.

“But I thoroughly enjoyed the experience and learned a lot from the people I worked with – it was good to work with such a high-class group of umpires.”

The pair were part of an international team of umpires, joining colleagues from Portugal, Denmark, Belgium, Germany, Sweden, Korea, Italy and Japan.

Sherlock said: “The umpiring here has been very good and it’s a good chance for our umpires to get international experience and work with experienced umpires from abroad.

“We’ve got the man’s and women’s singles umpires from the Rio Olympics here, so that’s the class they are working with.”

Sherlock, who was the table tennis referee at the Rio 2016 Olympics, said the Team World Cup stood comparison with other events he had attended.

I’ve never been to the Copper Box before – it’s a fantastic venue and the presentation side has been the best I’ve seen in the UK by far, it’s absolutely superb,” he said.

“To cap it all, England had some fantastic results.”

Referee Zhang Ying Qui added: “All the umpires have been very good and have followed all the rules and regulations and correct procedures.

“The main hall is very good, the colours are nice. Between the matches they have had some very funny things with videos and children playing on the tables. I think it’s good presentation.

“I think everything is good, perfect!”