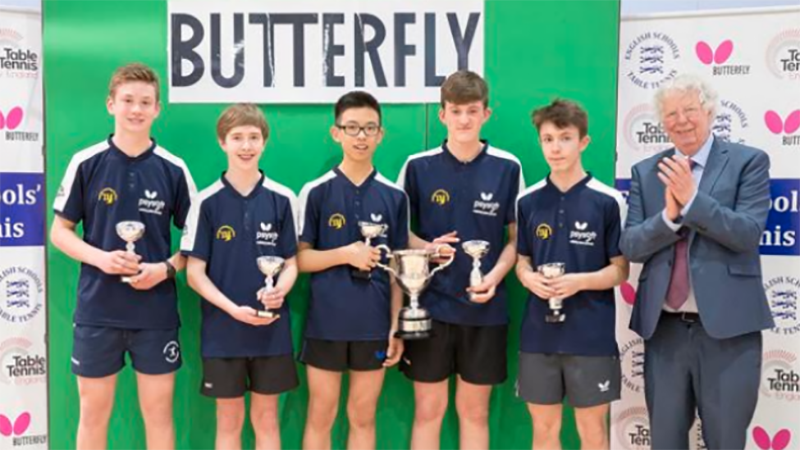 The championships began back in 1967 with just one age group for boys and girls with events for younger players being introduced in successive years so that the current structure of four age groups was complete by 1970, although the Under-11 event was a mixed event for its first 10 years.

The Butterfly brand name has been ever present in the competition title since the 2007 event through the sponsorship of schools’ table tennis by Ransome Sporting Goods – and the Finals were enhanced by use of their top-quality tables.

The Finals were as exciting as ever and featured the customary mix of teams from schools with long table tennis traditions who make regular Final appearances and the first-timers who, inspired by this year’s success, may go all-out to reach this stage in future years and to become national champions if they didn’t achieve that lofty position this year. All 140 participants gave it their all to become this year’s champions.

Both Under-19 events were dominated by Grantham College while in the Under-16 Boys’ championship Tanbridge House School (West Sussex) came out victorious with some of their team members now having won national titles at Under-11 (as Southwater Junior Academy), Under-13 and Under-16 level.

This year we had two events in which two of the four teams were from the same county with the county runner-up team, having been nominated by their Schools’ County Secretary as being of a good standard, and duly proved it by progressing to the Finals; the Girls’ Under-16 event featured Charles Read Academy (Champions) and Priory Ruskin Academy (4th), both from Lincolnshire, while in the Boys’ Under-11 championship two Nottinghamshire teams battled it out with St Peter’s Academy finishing third and Redlands Primary fourth.

The Under-11 Boys’ champions were the very impressive Earls Hall Primary team from Essex. Under-13 Girls’ Champions this year were last year’s runners-up, Ripley St Thomas High School from Lancaster, and in the equivalent Boys’ championship St Mary’s College Hull completed a hat-trick of consecutive victories although it took a hard-fought 5-3 win over Wallington Grammar School (London South) to clinch the title.

More complete details of results can be found in the Schools’ section of www.tabletennisengland.co.uk by clicking on the appropriate ‘School News’ item. If your school has not taken part in the Team Championship this season why not start planning for next season now? You’ll need four players for a team (two for Girls’ Under-19). Contact your Schools’ County Secretary (or Table Tennis England for guidance) in the new school year to find out when your county championship will be played.