Friday Photos: Can you identify any of these players? 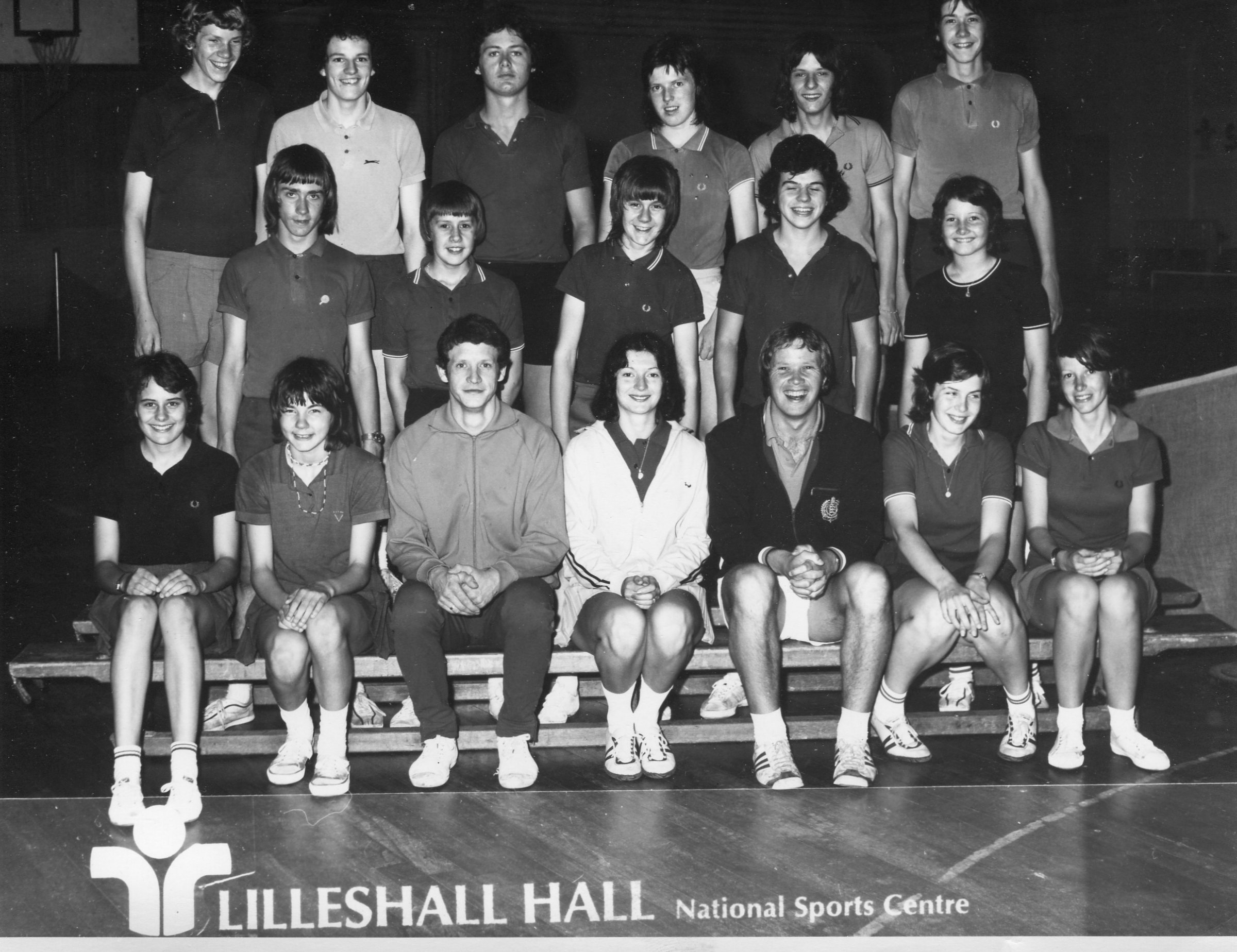 This week, we have three photographs from times past at Lilleshall.

A group of young players including Andy Barden along with coaches Susan Howard and Peter Hirst. Names of other players and the third coach are needed, as is the date of the photograph and the occasion.

A group of coaches (not sure what the collective noun is!) taken at Lilleshall, date and occasion unknown. On the far right on the bottom row are Peter Hirst and Mike Lewis. All further information would be appreciated.

There have been lots of responses this week both by email and on Facebook, which have been passed on to me. The interest and the identifications are greatly appreciated. With one or two of the images different names have been put forward, so I have listed the alternatives and if anyone can give a definitive answer that would be great.

A reminder that I can be contacted directly on [email protected] and that full details of all previous week’s photos can be found under ‘Our Sport’ on this website.

The two unknown players are Julie Speight (WD runner-up) and Rachel Brook (JGS runner-up) – can anyone say which is which?

Derek Schofield – ETTA Vice-President and Veterans English Table Tennis Society Chairman. Derek played in the European Championships in 1966, reaching the last 64 in the Men’s Singles. He also played in several English Opens. Derek’s most successful National Championships were in 1992 when he was the runner-up in the Veterans Men’s Doubles with Brian Allison as well as reaching the Veterans Men’s Singles semi-final. VETTS first Chairman 1984-1998 and founder member. VETTS Honorary Life Member 1998.

Alan Cooke – One of the greats of English table tennis who made his England Senior debut in 1984. Alan has been honoured by the ETTA, being made a Vice-President in 2006 and receiving the Victor Barna Award in 1988 and 1989. As well as being England No 1 for some time, Alan reached a world ranking of 27th in 1970. Of the seven World Championships Alan played, his highest team position was ninth in 1989 and that year he reached the quarter-finals of the Men’s Doubles with Carl Prean. The World Team Cup saw Alan finishing third in 1990, fifth in 1991 and fifth in 1994. In eight European Championships, team silvers were achieved in 1988 and 1992, added to which was a team bronze in 1990. European League matches saw more than 50 performances between 1983 and 2004.

National Championships have seen another impressive haul of medals, with six Men’s Singles golds and five silver medals. He was Men’s Doubles champion six times with Desmond Douglas, twice with Bradley Billington, and once with Paul Drinkhall. Mixed Doubles saw three titles with Nicola Deaton (Perry). In 2006 Alan gained his first World Champion win in the World Veterans Over-40s in Bremen, defeating Mikel Appelgren of Sweden in the finals. Now a coach for the England team, Alan is passing his knowledge and expertise on to the next generations.

Joanne Shaw – An England International who played in the Commonwealth Championships in 1985, reaching the Women’s Doubles semi-final with Mandy Sainsbury. In 1984 Joanne was a member of the winning Quadrangular Championships team. Joanne played in several National Championships and the English Open in 1990.

Aubrey Drapkin – One of the most highly honoured and respected members in English table tennis, and an Honorary Life Member of the ETTA/Table Tennis England. Aubrey was awarded the inaugural Keith Ponting President’s Memorial Award for Lifetime Achievement in 2013, became a Vice-President in 1993 and was the recipient of the Malcolm Scott Award in 1982. Aubrey was the ETTA Treasurer between 1980 and 1987 and has been a National Councillor for Northumberland for many years as well as being on several ETTA committees. Northumberland County TTA have benefited through Aubrey’s several years of Chairman and other committee positions. Added to which he has been the 100 Club Treasurer for over 30 years.  A prominent referee and umpire, Aubrey became an International Umpire in 1984 and National Referee in 1981.

Alison Gordon (Broe) – Alison was one of the most prolific representatives for England in the 1970s and 1980s, playing in more than 500 matches for her country and reaching European No 13 on the way. Playing in five World Championships, Alison’s highest team finish was ninth in 1985. A World Team Cup performance in 1991 saw Alison finishing ninth. Seven European Championship appearances, and Alison was a member of the team which finished fourth in 1994 and 1996, and further representative matches were played in European League matches over a number of years. Three Commonwealth team golds were won in 1979, 1982 and 1985, with silver in 1989, 1994 and 1995. A Mixed Doubles title holder in 1985 with Desmond Douglas and Women’s Singles runner-up in 1982 saw another clutch of medals won.

Further additions to the trophy cabinet came via two Quadrangular team golds in 1987 and 1988 and two English Open wins  – Women’s Doubles in 1986 with Joy Grundy and Mixed Doubles with Desmond Douglas also that year. Alison was four times National Champion in the Women’s Singles and twice runner-up. Women’s Doubles saw more gold medals with Mandy Sainsbury (1984) and Nicola Deaton (1996). In 1985, she won the gold medal in the Mixed Doubles with Graham Sandley. Alison turned her attention to coaching and became a World Class Performance Coach and worked for the ETTA as the Southern Regional Coach for some time.

Alan Fletcher – England International who won a team silver medal at the Edinburgh Commonwealth Championships in 1977, winning eight from 13 matches. Another regular at both the English Open and National Championships in the 1970s and early 1980s. In 1978 Alan was Men’s Doubles runner-up with Nigel Eckersley at the Nationals and Mixed Doubles semi-finalist in 1981 with Mandy Smith (Sainsbury).

David Wells – An England International who reached the Commonwealth Championships Semi-Finals in the Men’s Singles in 1985. David also won a team gold in the Quadrangular Championships in 1984.

Nigel Eckersley – One of the great showmen of recent times who gained his first England cap in 1977 at the World Championships in Birmingham. Perhaps Nigel’s best moments were at the Commonwealth Championships in 1982 where he won two gold medals, one in the team event, winning 12 of his 13 matches, and then in the Mixed Doubles with Joy Grundy. A regular at English Opens from the 1970s to the 1990s, his highest achievement was reaching the Veteran’s Men’s Doubles finals. Nigel also has played in many National Championships spanning 35 years. He was runner-up in the Men’s Doubles in 1978 with Alan Fletcher and Mixed Doubles Champion with Karen Witt in 1978 and Joy Grundy in 1983. The Veterans Men’s Singles saw three gold medals in 1993, 1994 and 2005 and three silvers in 1995, 1997 and 2001.

Claire Potts – England International whose Senior debut was in the Polish Open in 1985. At the National Championships, Claire’s most successful year was in 1988 when she reached the semi-finals of the Women’s Doubles with Julie Billington.

Matthew Syed – England International who has more recently diversified into media. Matthew received the Victor Barna Award in 1991, 1997, 2000 and 2001. Matthew’s defensive game was a delight to watch and earned him a place in six World Championships and two Olympic Games, a World Cup place in 1992 and World Team Cup in 1991 and 1994, finishing fifth both times. European Championships saw a silver medal in 1992 in the team event followed by four more appearances as well as a regular player in European League matches between 1992 and 2004. Six gold medals were won at Commonwealth Championships – Team Gold in 1989, 1994, 1997, 2000 and Men’s Singles champion in 1997, 2000 and 2001. The Commonwealth Games in Manchester saw another team gold won on home soil. Domestically, Matthew played in several English Opens and was title-holder in the Men’s Singles National Championships in 1997, 1998, 2000 and 2001.

Andrea Holt – A star England International for many years, being awarded the Victor Barna Award in 1995. Five World Championship performances – the best finishing 10th in 1989 and 1995. Andrea also reached the last 16 in the Mixed Doubles in 1989 with Loukov. A World Team Cup appearance in 1991 saw the team finish ninth. Andrea attended two Olympic Games, in 1992 and 1996. On the European front, Andrea played in five European Championships, with the team finishing fourth on two occasions. She also played regularly in European League matches for many years. Commonwealth Championships resulted in four team silver medals – 1989, 1994, 1995 and 1997, with further silver in the Mixed Doubles in 1995 with Andrew Eden.

Peggy Piper – An England International whose debut was on 10th December 1953 against Wales, which resulted in a singles and doubles victory and an overall team win 8-1. In the World Championships in 1954, Peggy reached the last 16 in the Mixed Doubles. She reached the quarter-finals in the Women’s Doubles in 1962 in the European Championships.

Peggy played in 16 English Opens between 1949 and 1965. Her most successful year was 1960 when she was runner-up in the Women’s Doubles with Peggy Hook (Franks). The National Championships were first held in 1960 and Peggy reached the semi-finals and quarter-finals on many occasions in the first half of that decade, gaining a winner’s medal in September 1960 in the Mixed Doubles with Michael Maclaren.

Brian Kennedy – An England International and World Champion being part of the brilliant Championship-winning Swaythling Cup team in 1953 along with Richard Bergmann, Johnny Leach and Aubrey Simons. Eight other World Championship appearances saw a range of positions from third to ninth in the team event. Brian reached the round of 16 in the Men’s Singles on three occasions; was Men’s Doubles quarter-finalist with Aubrey Simons in 1953 and Mixed Doubles quarter-finalist in 1951 (Joyce Roberts) and 1953 and 1954 with Kathy Best. European Championships bronze was won in 1958. English Open successes came in the Men’s Doubles in November 1953 with a gold medal partnered by Aubrey Simons as well as several runners-up, semi-finalist and quarter-finalist positions in all events. The National Championships did not start until the tail end of Brian’s playing career, nonetheless he won a silver medal with Johnny Leach in the second championships run in September 1960.

Jackie Head/Jean Head – Special thanks go to Jean Head who provided the information in this photograph which includes her late husband Jackie Head. A golden couple of the 1940s and 1950s, Jackie made his England debut versus Scotland in Glasgow on 17th December 1951, a fixture which England won 9-0. Jackie played in two World Championships, 1948 and 1954, on the latter occasion reaching the last 16 in the Men’s Doubles with Derek Burridge. Several English Open appearances saw several semi-final and quarter-final placings. Another player where the National Championships only started in the latter years of their playing days resulted in playing in the first championships in January 1960. One of Jackie’s finest achievements was being a member of the five times winning Wilmott Cup team alongside Harry Venner and Ron Crayden from 1950-1954.