Friday Photos: Can you fill in the gaps in our archives?

I would like to thank everyone who has contacted me with information via more than 40 emails, and/or provided the VETTS Facebook with 12 comments. Most players have been identified but there are still some missing names to the faces.

Thanks especially to Phil Vickers, who identified the event as the U13 National Championships which took place at Northfield YMCA, Banbury Street, Birmingham on 3rd June 1972. That year there were 16 finalists who qualified through regional rounds. 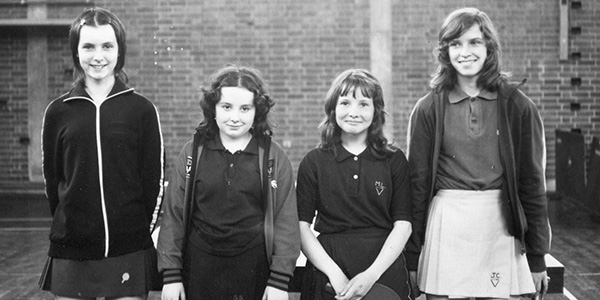 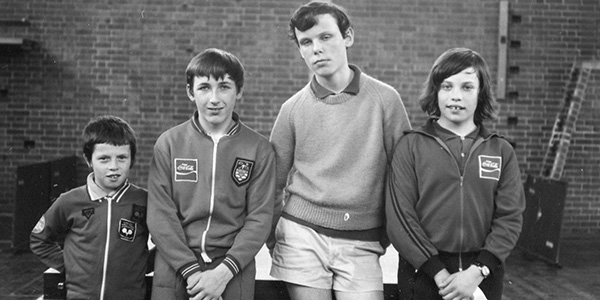 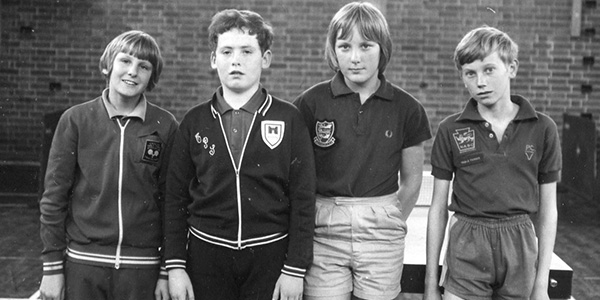 Several of these players went on to represent England at Senior international level and win National titles.

Suzanne Hunt (Airey) – Played in the Commonwealth Championships in 1977, where she reached the last 16 in the Women’s Singles and quarter-finals of the Women’s Doubles with Angela Mitchell. On the domestic front in the National Championships Suzanne was Women’s Singles quarter-finalist in 1981 and semi-finalist in the Women’s Doubles in 1979 and 1987 with Karen Smith (Rogers). Suzanne was also U17 National Champion. In later years Suzanne was Regional Coaching Chairman for several years and latterly an ETTA Board Member and Vice-Chairman (Coaching). Suzanne is currently a Table Tennis England Advisor (Coaching).

Melody Ludi (now Mrs Hill) – Played for England in the World Championships in 1977 and was a member of the Corbillon Cup team which finished seventh. That year Melody also played in the Commonwealth Championships, where the team finished in silver medal position. She was a semi-finalist in the Women’s Singles, winner of the Women’s Doubles with Karen Witt plus runner-up with Andy Barden in the Mixed Doubles. Melody also played in the Commonwealth Championships in 1979.

In the National Championships, Melody reached the Women’s Singles semi-finals in 1977 and was runner-up in the Women’s Doubles with Carole Knight in 1977 and with Karen Witt in 1979. Added to which she was Mixed Doubles champion with Paul Day in 1977.

Paul Day – Paul played in three World Championships – 1977, 1979 and 1981. The highest placing in the Swaythling Cup was sixth in 1981. Paul also made three appearances in the European Championships and was team silver medallist in 1978. Paul also represented England in European League matches between 1976 and 1982.

The Commonwealth Championships in 1982 saw Paul win 11 from 15 matches in the team event to help his team to the title. English Open success came in 1980 when, with Desmond Douglas and Donald Parker, the trio took the team title.

Paul went on to be England Team Captain, Chairman of ETTA Selection Committee, Vice-Chairman (Selection) and in 1996 was awarded the honour of ETTA Vice-President in recognition of his work.

Andy Barden – Andy played in the World Championships in 1977 when the team finished 10th, the preceding year he was a member of the European Championships team which finished seventh.

In 1977 at the Commonwealth Championship, Paul was runner-up in the Men’s Singles and Mixed Doubles with Melody Ludi, he also reached the semi-finals of the Men’s Doubles with John Hilton.

One of Andy’s greatest achievements was to win the Spanish and Swiss Opens in consecutive tournaments.

Chris Sewell – Chris made his England Senior debut in Hong Kong at the Five Nations Tournament. He played in English Open Championships in 1974 and 1976. In the English National Championships, Chris reached the quarter-finals of the Men’s Doubles in 1975 with Mark Mitchell. Chris was also a finalist in the National Junior Boys Championships and represented England at Junior level as well as at Senior level.

Chris was killed tragically in a car accident on his way home from a German Bundesliga match in 1997.

Can you help with our latest selection of archive photos?

Here is one where we do know all the information – the Bromfield Trophy winners from North Acton in 1974/75. Pictured from left are Sue Dove, Marilyn Sangster and Jill Campion. 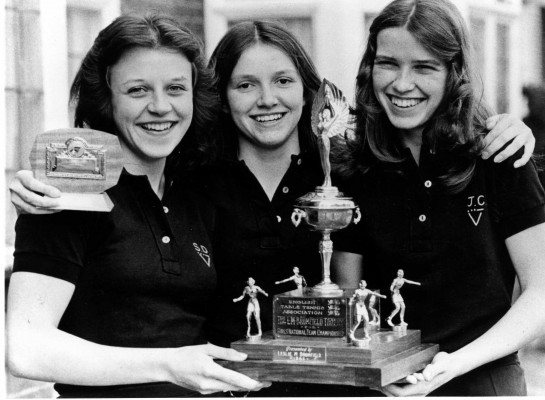 But there are several others with missing information, and we’re hoping our members will be able to help. 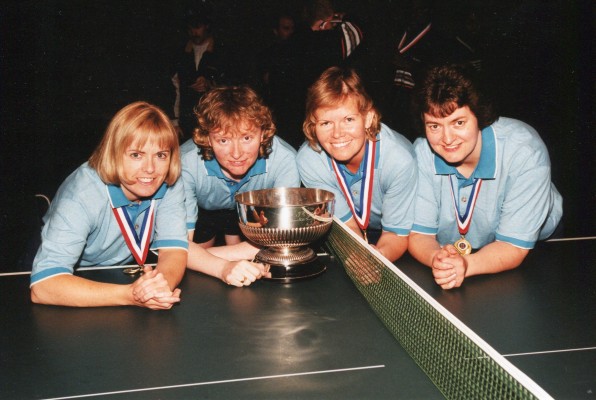 This photo shows Wolverhampton, winners of the JM Rose Bowl for 16 consecutive seasons between 1986 and 2002. On the left is Jan Dunning (Johns), while Sandra Roden is second right and Jill Harris right. Does anyone know who is the player second from the left, or what year the photo was taken? Any information on the other winning Wolverhampton teams from that era would also be useful. 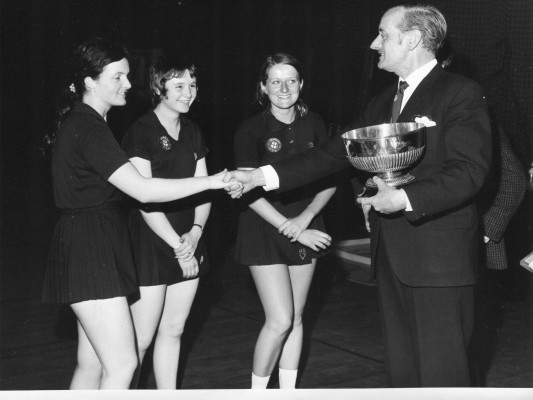 Other serial winners of the JM Rose Bowl were the Central League, victorious from 1968 to 1974. Pictured here are Judy Williams, Karenza Matthews and Diane Simpson, but can anyone identify the year this photo was taken? And who were the Central League players in the other winning years. The tournament on this occasion was sponsored by Coca-Cola and the presentation is made by Mr Harry Childs their General Manager of Coca-Cola Western Bottlers Ltd.

This photo features referee Mick Strode with some very young players. Can they be named, along with the year? 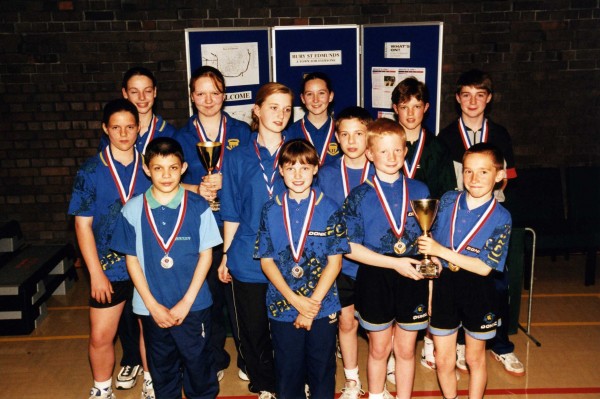 This photo was taken on the same occasion as No 4. A very young Jo Parker is at the centre of the back row. Can you name the other players and the year? 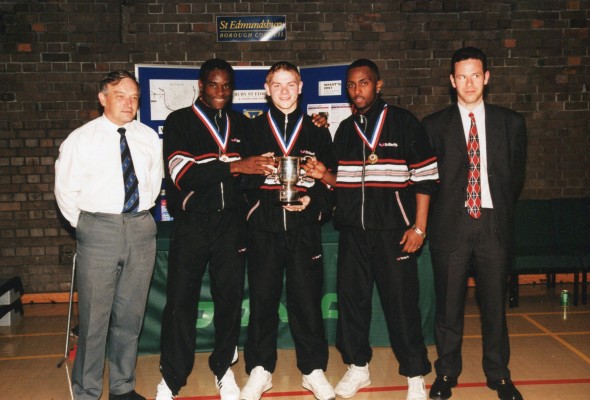 In this photo, Mick Strode is pictured with the winning Wilmott Cup team. Jason Sugrue was a member of the winning team for five consecutive years in the 1990s for West Middlesex but with different players. Can you identify the other players and the year in this picture?

Details of all winning teams and their players in the Wilmott Cup, JM Rose Bowl, Carter Cup and Bromfield Trophy can be found in the Competitions section of our website. Please click here and then select English Leagues Cup Competition.

Any additional information on any of the winning line-ups would be most welcome, as would any photographs of winning teams.

Contact Diane Webb at [email protected] with any information.