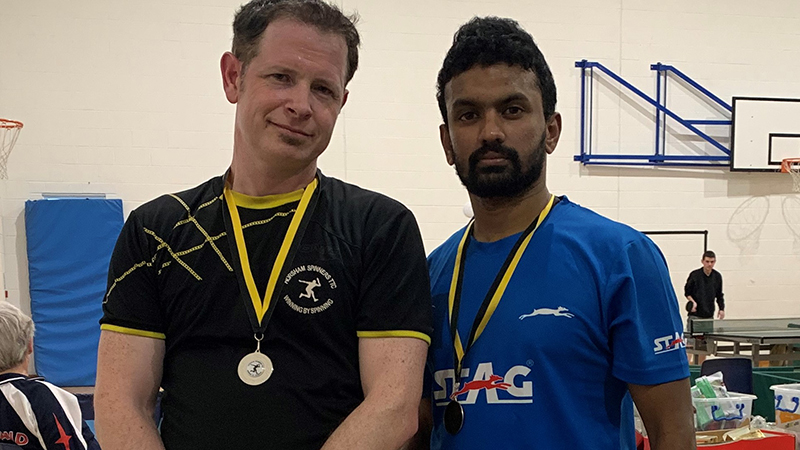 Nine players entered the vets and 10 entered the seniors (five players played in both). Both age categories were run in the round-robin format, which made for a lot of matches. For those who played in both events, there were 17 matches each.

There were new champions in both age groups. Regular attendee Fawzi Yousif (Sx) impressed in the veterans, with a first ever victory over top seed and habitual winner, Rory Scott (IRL).

In the seniors, it was debutant Amila Thilakarathna (Sx), originally from Sri Lanka, who denied Scott another title.

No 3 seed Yousif won all eight of his matches to claim the gold medal. He impressed in his match versus top seed, Scott, winning in four, with a tremendous display of flat hitting and counter-attacking. He was actually extended to five games by Paul Nicol (E), who seems to have improved a lot recently.

Scott took the silver medal, with seven wins, but very nearly came unstuck against big-hitter, Barry Cheer (Sx). Cheer took the first game close 13-11 and then with some blistering backhands stormed the second game 11-3. Scott had to step up his game, winning the next two 11-9, 11-3 to draw level. He looked safe when leading 6-2 in the fifth game, but Cheer had other ideas and played well to take a 10-9 lead, only to for Scott to finish well and take it 13-11.

Second seed Ken Lewis (E) came third, with six wins, but was pushed to 11-9 in the fifth by Nicol. Nicol lost a third five-setter to Cheer, who ended up fourth with five wins.

Chris Pullinger (Sy) took four wins and was fifth. He defeated Lynne Trussell (Sx) 11-9 in the fifth and ensured the luckless Nicol suffered a fourth fifth-game defeat by 12-10 in the decider. Nicol came sixth, with three wins, but with a little luck could have won seven! Adrian Cretu (Sy) won twice and came seventh, while Trussell defeated Mick Stanners (Sy) to finish in eighth place.

Thilakarathna and Scott both won their first eight matches to set up a finale playing for the gold medal. This was a dramatic encounter, with plenty of rallies, as attacker Thilakarathna and all-rounder Scott had some good rallies, Scott mixing up defence with opportunistic attacks.

Amila took first blood with an 11-7 game, but Scott countered with two 11-9 wins. Thilakarathna restored parity with an 11-6, so they were poised for a photo finish in the fifth game. They did not disappoint the onlookers, as Thilakarathna scraped the win 12-10 in the fifth.

Prior to the final encounter, both Scott and Thilakarathna had endured fifth-game matches, Scott with an inspired Nicol and Thilakarathna with talented youngster, Harry Yip (Sx), that game only being decided 11-9 in the fifth. Yip, aged 12 at the time impressed in finishing third in the tournament, with seven wins. He got a game off Scott and won deciding games against Lewis, Mina Matta (Sx) and Nicol.

The next Senior/Veterans 1 Star tournaments in Sussex are 4th May in Horsham, 18th May in Burgess Hill and 19th May in Horsham. Entry forms are on the Table Tennis England website.

At the first Topspin Sports Horsham Spinners Veterans and Senior 1 Star Ratings tournament on 26th January 2019, 12 players entered the vets and 11 entered the seniors (seven players played in both).

For the 10th time out of 10, Horsham Spinners TTC Coach, Rory Scott (IRL), won the Veterans, with eight wins out of eight. He also won the Seniors for the eighth time out of nine attempts, with a further eight victories.