The ninth and final Jarvis Sports Cadet/Junior 2 Star of the 2017-18 season, run by Horsham Spinners TTC and refereed by Rory Scott, took place on 8th July 2018 at the College of Richard Collyer, Horsham. 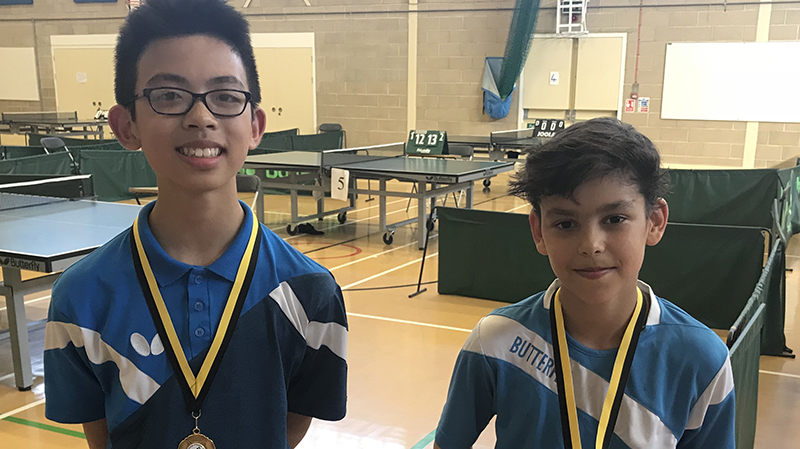 The ninth and final Jarvis Sports Cadet/Junior 2 Star of the 2017-18 season, run by Horsham Spinners TTC and refereed by Rory Scott, took place on 8th July 2018 at the College of Richard Collyer, Horsham.

There was a good entry of 54 entrants for this one, which was nice considering the low entries in some of the recent tournaments. No-one won two age groups, but Harry Yip (Sx) did very well, winning a gold and a silver.

There were 16 players in this age group. In group 1, Eduard Lakatos (Ha), the top seed, was displaced by Jacob Archer (Sy) into second place in the group. Archer also beat the higher ranked Daniyal Palmer (Sy).

In group 3, George Noel (Sy) beat the slightly higher ranked third seed Ojasvii Borah (Sy) 3-0, but only beat George Jackson (Mi) 3-2. Group 4 was an all-girl group of six players, to give them a chance to play each other. Jessica Moggeridge (Do), the highest ranked of the girls, won all five of her matches to top the group, but only beat group runner-up Hannah Silcock (JEY) 3-2.

The final was a four-game victory for Wilson. Borah edged past Noel in the bronze medal match 11-9 in the fifth end. Jackson won the consolation event, beating Anna Piercey (Bk) in four.

There were 23 players in this category and the U13s was the biggest event of the day. In group 4, No 4 seed Abbie Hurley (K) lost to both Piercey and Silcock (both 3-1), but did beat Borah 11-9 in the fifth and she ended up in the consolation event. In group 6, Archer continued to wreak havoc with the rankings, beating three girls all ranked above him, including No 6 seed Saskia Key (K) 11-6 in the fifth.

In the quarters No 1 seed Yip knocked out Wilson in three, Ben Barbarash (Mi) put paid to Archer in four, Charlie Nabarro (Mi) saw off Borah in four and Adam Palmer ousted No 2 seed, Lakatos, in three. In the semis, Yip and Palmer were too strong for Barbarash and Nabarro respectively, both winning in three.

Yip repeated his 3-0 group stage win over Palmer in the final. Barbarash won the bronze medal in four. Danny Klinger (Ha) won the consolation event at the expense of Robert Wood (E), whom he defeated in straight sets in the final.

This consisted of 16 players. Tom Nguyen (Sx) had a massive win over No 2 seed, Ben Poulter (Ha) 3-2. 400 points separates the two players. Poulter still went on the win the group on countback though, as Nguyen lost to Key 3-2, who lost to Poulter 3-0.

The semi-final results were wins for Mindlin over Barbarash and for Poulter over Maric-Murray both in four. Poulter defeated the higher ranked Mindlin in the final 3-1. Maric-Murray had a straight games win over Barbarash in the bronze medal match. Jamie Barlow (Bk) overcame Sasha O’Halloran (Sx) 13-11 in the fifth in the consolation final.

19 players contested the U15s. In group 6, Maric-Murray had a good win over the slightly higher ranked Jaden Aulakh (E) 3-0, but found it harder against Agombar, only winning 3-2.

In the quarters, top seed Jack Trafford (Do) was knocked out by Aulakh 3-1, Yip battled past Poulter 11-9 in the fifth, Jamar McGlashan (Sx) with his awkward style, frustrated Mindlin (over 200 points above him), winning 3-1 and second seed, Jacob Evans (Sx) knocked out Maric-Murray 3-1.

In the semis, Yip brought Aulakh’s run to an end in four and Evans proved too hot to handle for McGlashan, winning comfortably in three. In the final, Horsham TTC club-mates Evans and Yip faced each other, with the higher ranked Evans winning in four as expected. Aulakh struggled in the bronze medal match against McGlashan, but came through over five ends. Julio Key (K) defeated Ben Sivathanu (E) in the consolation final in straight sets.

There were 16 players in the U18s. There weren’t any big surprises at the group stage, but Jamar McGlashan (Sx) did well in Group 3, beating the higher ranked Ollie Nutting (Sy) and taking No 3 seed Jared Schaller (Ha) to five ends.

In the quarters, No 1 seed, Jamie Nordin (Sy) eased past McGlashan in three, Will Poulter (Ha) knocked out Evans in four, Schaller saw off Jodie Morris (Sx) in three and Aulakh defeated Trafford in five for a second time (3-2) – though actually the U18s was before the U15s.

In the semis, Nordin sailed past Poulter in three and Schaller came back to triumph from 0-2 down in games against Aulakh. Nordin dispatched Schaller 3-0 in the final. Poulter won the bronze medal, with a 13-11 in the fifth defeat of Aulakh. Julio Key won another consolation event, beating Alex MacDonell (Sy) in four in the final.