Top Gunn once again at Cippenham

Martin Gunn, by far the most successful player ever in open tournaments at Cippenham, maintained his winning ways with his 10th title. 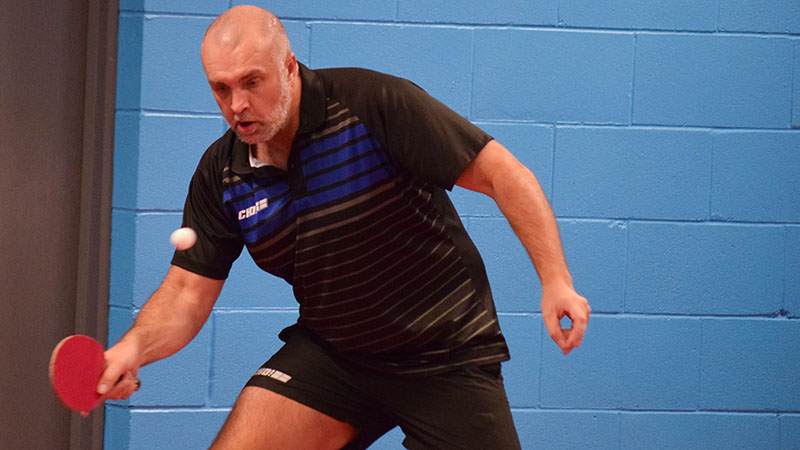 Martin Gunn, by far the most successful player ever in open tournaments at Cippenham, maintained his winning ways with his 10th title.

This came in the Senior Singles at the Cippenham Five by Two Senior & Veterans’ 1-Star Open. However, Gunn’s winning streak did have a blip when he lost in the quarter-final round of the Veterans’ Singles, played earlier in the morning, an event won by Kevin Caldon.

Seeded second for the Senior Singles, Gunn’s progress through the event was imperious, and the title was won without the dropping of a single game. After four wins in the preliminary round group, Gunn went on to defeat Stuart Laws, Anthony Ellis and Josh Dye to set to a final showdown with Richard Jermyn, perhaps the player of the day.

Up to the final, Jermyn’s carve through the field was every bit as decisive as Gunn’s and his run of 3-0 victories included, in his victims, Cippenham’s Paul Baker, top seed and defending champion Chris Bush, and then, in the semi-final, an absolute demolition of Gary Keers.

Of note in the earlier rounds were Dean Rose’s thrashing of fourth seed Kevin Nicholls in the quarter-final and Anthony Ellis’ win over Richard Oppenheim the previous round in a reversal of the result between the two earlier in the day.

It had all been quite different for Gunn in the morning’s Veterans’ Singles event. The top seed won his group and then beat Gary Keers but then fell to Oppenheim in the quarter-final. Third seed Jermyn, meanwhile, won his group and then proceeded to eliminate Stuart Laws, Philip Smith before his meeting with Oppenheim in the semi-final, a match then went the seeded player’s way.

In the bottom half of the draw, the second seed, Kevin Caldon, and fourth seed, Kevin Nicholls, both progressed well although Graham Outrim did take an end off Caldon in the quarters. The semi-final match between the two Kevins resulted in a win for Caldon and he, then, also had little difficulty in winning the title with a three-straight win over Jermyn in the final.

From a loc al perspective, Paul Baker won the Veterans’ Consolation Singles but was pushed all the way to deuce in the fifth by Bharat Malde in the final.

The tournament was organised by Paul Baker and refereed by Sue Hayes and attracted a near maximum entry.