22 players took part in the Jarvis Sports Chichester Veterans and Senior 2 Star tournament on 17th June at Six Villages Sports Centre in Westergate, near Chichester and it was refereed by Sue Hayes. 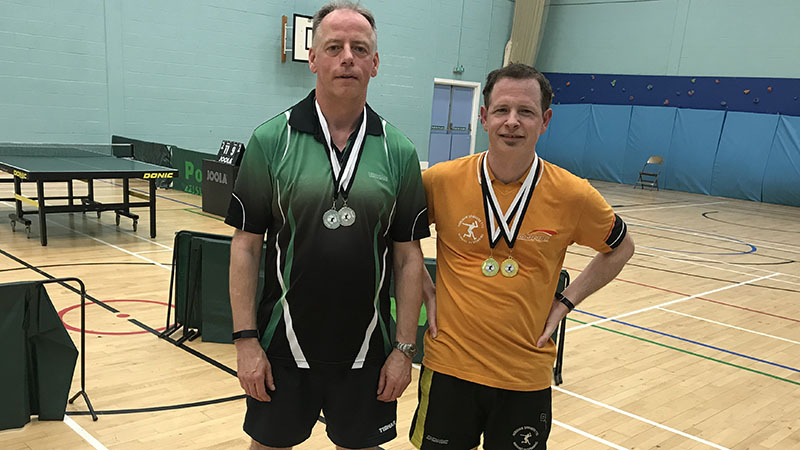 22 players took part in the Jarvis Sports Chichester Veterans and Senior 2 Star tournament on 17th June at Six Villages Sports Centre in Westergate, near Chichester and it was refereed by Sue Hayes.

There were 19 in the vets and nine in the seniors, six of whom were playing in the vets as well. There were only actually two senior players (under 40) in the tournament (one veteran chose to play in seniors but not vets).

The format for the seniors was one large round-robin group of nine players all playing each other.

Top seed for both the seniors and the vets, Rory Scott (IRL), justified his ranking, winning all 18 of his matches on the day and thereby setting a personal record for number of matches won on a single day with no losses.

This means he has now won all 11 senior and veteran events he has entered at the six Ratings tournaments in Sussex in the last year. That makes 86 matches won out of 87. The one loss was to Michael Wilkins (Bd).

The final Ratings tournament in Sussex this season is on 7th July at Burgess Hill and there are still spaces available.

In the second round of groups, Group A (main) turned out to be Scott, Roger Pingram (K), Pullinger, Edwards and Marlow. Scott won all of his matches, only conceding one end to Edwards. Pullinger continued his successful day with three more unexpected wins over the others, including a five-ender over Pingram. Edwards came third with three wins and Marlow got the last knockout space with a single win over Pingram.

Group B (main) was No 2 seed, Phil Snelson (Sy), Barnes, Lewis, Sue Pingram and William Panes (Wa). Snelson won all four of his matches (3-0 vs Sue and 3-1 vs the others). Barnes came second with three wins. There was a three-way points countback for places three to five. Pingram missed out on the knockouts, with Lewis coming third in the group.

In Group C (consolation), favourite Lowe won the group, although did suffer defeat to future team-mate Alison Jordan (Sx). In a three-way countback Lowe was first, then Alan Papier (Av) and then Jordan.

In Group D (consolation) Lynne Trussell (Sx) won all four of her matches to top the group, with a three-way count-back deciding the next three group positions. Chernett came second, then Stephen Nelson-Smith (Ha), then Graham Underwood (Ha). Nelson-Smith was playing well, with a maximum win over Chernett and only lost to both Trussell and Underwood in five.

The final fittingly turned out to be the most exciting match of the day. Scott took the first 12-10, only to be pegged back 9-11. He then took the lead again with an 11-8 win, only for Snelson to equalise again with a confident 11-5 game.

The fifth game was neck and neck and a good quality game, which Scott edged 11-9 in the end. In the consolation semis, Lowe overcame Chernett in five and Trussell came through in five versus Papier. Lowe was too strong in the final, winning in straight games.

Top seed Scott won all eight of his matches to win the gold and indeed only dropped one end (vs Barnes) in a ruthless display. His match against No 2 seed Snelson included an easy first game, followed by two closely fought games.

Snelson didn’t have it quite as easy as Scott in his remaining matches, being taken to five by Edwards and conceding three additional ends. Panes did very well to get third place, from being ranked fifth and had a great win over Barnes 11-9 in the fifth, who although unranked in seniors, was the No 3 in the vets. He also beat higher ranked players Edwards and Lewis 11-9 in the fifth and 11-7 in the fifth respectively. Panes’ other loss was to Christy Pin (Ha), also in five.

Barnes came fourth with five wins (the same number as Panes, but finished below him since he lost to him) and Pin came fifth with four wins, losing to Barnes in five. Edwards could consider himself unlucky to only finish sixth, as he lost three five-game matches (to Panes, Richard Cosens (Sx) and to Snelson). Lewis ended up seventh win two wins, including a five-setter vs Cosens. Cosens also got two wins, but finished eighth on countback.