Horsham Spinners were dominant on day 4 of the National Cadet League on home ground, winning 6-0 three times, 5-1 once & 4-2 once. 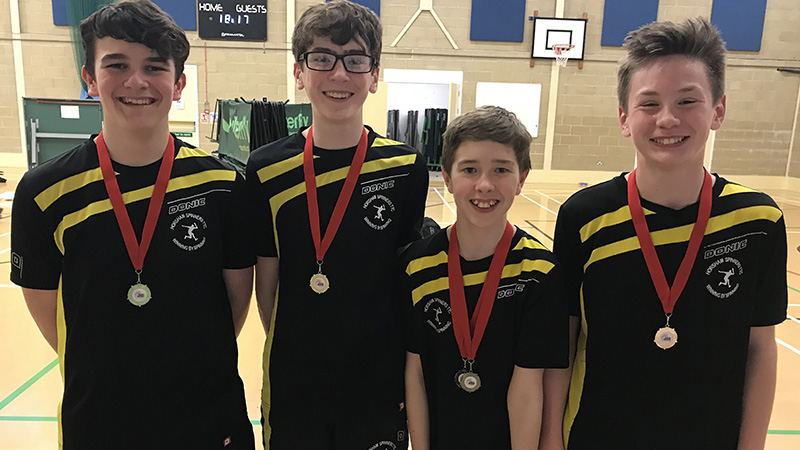 Horsham Spinners were dominant on day 4 of the National Cadet League on home ground, winning 6-0 three times, 5-1 once & 4-2 once.

On Day 4, the second best team was Horsham Spinners B, with 17 points. South Croydon A also won 17 points and drew with Spinners B, but Spinners B won by 11 sets to 10. John Strang from Spinners B & Henry Maric-Murray from Croydon A both had 8/10 at the No 1 position.

Ed Cozens was player of the season, winning 36 out of his 40 matches over the course of the season, playing three days from the No 1 position and one day at No 3. Sam Watts closely followed with 35 out of 40.

Horsham Spinners A also won the overall Division 1 title, having won on each of the four meetings. They ended up with 101 points and second placed Graham Spicer A had 77 points. South Croydon A finished 3rd overall with 65 points.

South Croydon B won even more emphatically than Horsham Spinners A did in Division 1, finishing with 28 points out of a possible 30. Their No 1 Jai Chotai, who was making his debut in NCL, won 10/10 and his team mates Rocco Martinez-Paoli at No 2 & Zeron Francis at No 3, provided excellent support with 9/10 each.

Darenth A, previous winners of Division 2 were in second place, 10 points behind South Croydon B. Eddie Gillhouley the No 2 from Darenth, won 9/10.

South Croydon C achieved the same feat as their B team, only conceding two singles matches on the day and thereby winning Division 3. Chidumebi Egbeama & Leone Saccoh both remained undefeated with 9/9, while Omari Levers won 7/9.

Horsham Spinners D, who had won Division 4 on Day 3, came 2nd in Division 3 on Day 4, although they were 10 points behind South Croydon C.

Darenth occupied the top two spots in Division 4 on Day 4, with their B team ending up on 23 points and their C team on 15 points.

Darenth players also dominated the top five places in the averages, with B team players Tommy Cowling & Ben Forrester, winning 9/9 & 8/9 respectively. It was also nice to see some of the regular players from lower teams picking their first wins of the campaign.