Only 25 players entered what was supposed to be another Jarvis Sports Burgess Hill 2 Star on 1st July, so for the second time in two weeks, for financial reasons, the tournament had to be moved to Horsham Spinners Table Tennis Club’s coaching session venue in Slinfold School. 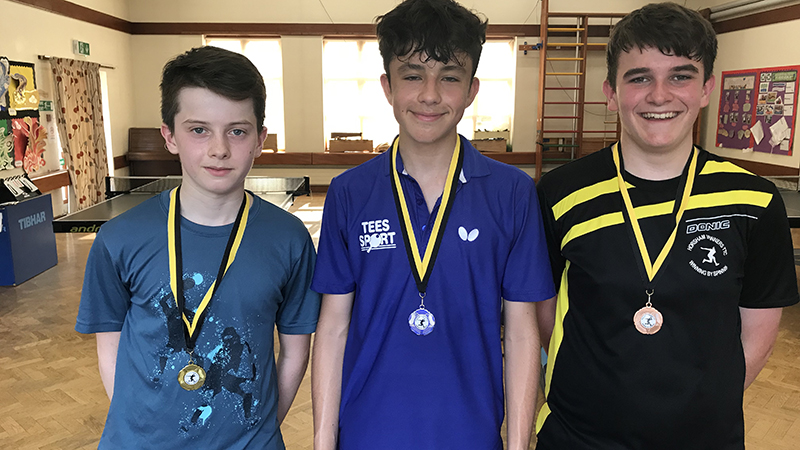 Only 25 players entered what was supposed to be another Jarvis Sports Burgess Hill 2 Star on 1st July, so for the second time in two weeks, for financial reasons, the tournament had to be moved to Horsham Spinners Table Tennis Club’s coaching session venue in Slinfold School.

This time we had three tables in use, two in the main hall and a third in a classroom, which was just the right size. Again the tournament was a success and like last time produced some new medallists. Henry Maric-Murray (Sy) was one such player. Having not previously won a medal at a Sussex 2 star, he proceeded to win two gold medals!

There were seven players in two groups in the U12s. In group 2 there was an upset, with Matthew Davies (K) beating second seed Anna Piercey (Bk) 3-2, as well as the higher ranked Sam Arnott (K).

In the semi-finals, top seed Krish Chotai (Sy) was usurped by Piercey in a close five-setter. Davies then saw off Ben McKay (K) 3-0. In the final, Piercey won another five-setter to get her own back on Davies and win the gold medal. Chotai beat McKay in the bronze medal match in straight sets. Arnott beat James High (Sx) in four in the consolation final.

This was a round-robin group of five players. Top seed Chotai won all four of his matches to get the gold medal, only losing one end to second-ranked Abbie Hurley (K).

In the quarters, Shah beat Hurley 3-1 and O’Halloran defeated Wood 11-9 in the fifth. In the semis, Maric-Murray knocked out Shah in three and Sochor-Grethe overcame O’Halloran in four. The final was a comfortable win for Maric-Murray in straight games. Shah got revenge on O’Halloran in the bronze medal match 3-1.

This was supposed to be two groups of three, but one player pulled out, leaving just two players in group 2. These two had a five-setter, with second seed Maric-Murray coming out on top over Ben Sivathanu (E).

In the semis, No 1 seed Jack Trafford (Do) saw off Sivathanu in four and Maric-Murray overcame Cozens 13-11, 12-10, 14-12 having been behind in the first two games. In the final, Maric-Murray defeated Trafford, who was ranked 200 points above him in four games. Cozens won the bronze medal match 3-1.

This was two groups of four. There were no upsets at the group stage. In the semis, top seed, Trafford defeated Cozens in four and second seed Brandon Bennett (Sx) beat Thomas Arnott (K) also in four. Trafford won the final 3-1, while Cozens beat Arnott for the first time (3-1) to get his second bronze medal of the day. Jai Chotai (Sy) beat Sivathanu in a close four-setter in the final of the consolation event.