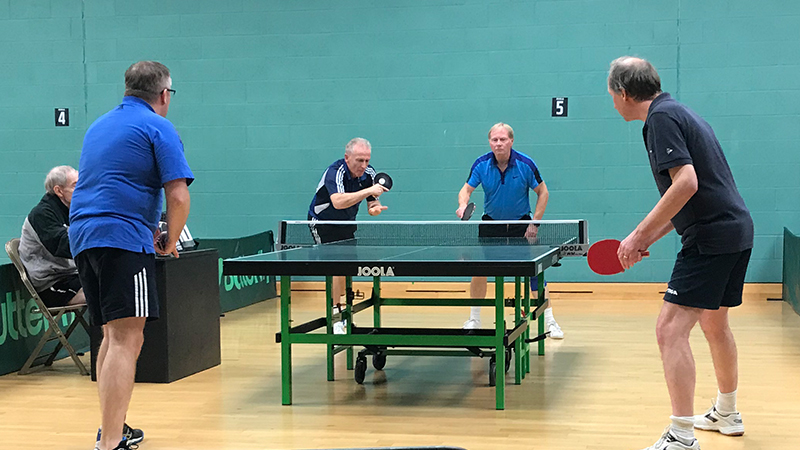 Congratulations are due to first time champions MK Sasaki who clinched the title with a week to spare by beating Greenleys Monarchs, champions themselves only 2 years ago. Sasaki joined the League in the 1980s with their founder, Kelvin Choong, giving his team the same name as his business enterprise. They have enjoyed mixed fortunes since, winning promotion to the Premier in 1992, and even dropping out of both the division and the League from time to time since.

Sasaki had acquired the best player and a great squad in support, so the title has been a formality. Their star man and new town champion Matt Haynes has been head and shoulders above the rest of the division and won his 3 as expected this week to extend his current unbeaten run to 15. Jamie Hendy and Michael Wilkins chipped in was a win a-piece and the doubles was secured for the 14th time, way ahead of any other team. For Monarchs Tomek Nowakowski hit a brace while Dan Appanna beat Michael and Bogdan Capusa got the better of Jamie.

Despite 3 defeats in a row Greenleys Kings should do enough in the remaining match to secure the runners-up spot. Their latest loss came at the hand of MK Kingpins. In a 6-4 defeat Guy Sparrow scores a maximum and Gary Deakin a single when beating Craig Brown. No wins for newlywed Jordan Moss (nee Wood). Dave Allison and Mark Purcell both hit a brace and combined to win the vital doubles.

Once comfortable in mid table, promoted team Greenleys Warriors have been dragged into the race for the bottom after a string of disastrous results, culminating this week in an 8-2 reverse to fellow strugglers MK Spinners. The match was going evenly at 2 sets all when the Warriors challenge collapsed as they conceded all remaining sets. Spinners’ Alan Cherry hit a hat-trick with 2 wins each coming from Tim Cheek and Gary Jones. For Warriors Colin Huang scores a brace but Ollie Horswell and Ricky Taiwo remained winless. Warriors are now level on points with bottom placed Kingpins and must equal or better their result in the final match to stay ahead.

Leaders MK Phoenix went 6 points clear of MK Topspin after finishing their programme this week with a 7-3 victory at Woburn Sands Data where Dave McGarragh was in the thick of the action after returning from holiday. He made a nightmare start in taking only 10 points over 3 games against Ioan Constantin (the least points conceded in a set in this division) before moving on to pull off his best victory of the season, over Alan Bolding, and closing by losing 9 in the 5th against Terry Lau, who had earlier lost to James Molloy and Rob McPheat.

My Topspin team struggled to a 6-4 win over a 2-man Greenleys Eagles and now need 7 points from our last match to overhaul Phoenix. Mervyn Kelly and myself returned to the side after illness to opposing fortunes. I beat Barry Bishop and Geoff Callaway whereas Mervyn succumbed to the battling Eagles’ all-rounders. The only other set won was Keegan Barstow in a lively evening’s opener against Geoff.

St.Christopher Van Hire shot into a 4-0 lead at home to MK Powers, with wins by David Broome over Sarah Hudson. Fabrice Spelta against Pete Tillotson and Paul Haigh over Jiten Pitamber plus the doubles, but couldn’t push on to victory as the visitors powered back magnificently to force a draw. Sarah started the come-back with a 5 game win over Fabrice and Pete tied the match in the final set against David.

A personal triumph for MK Pumas’ Keith Carrington against Greenleys Glory this week. Keith opened proceedings with a deuce in the 5th victory over Danny Sedgwick (who has a win over Michael Wilkins to his credit this season) and closed the match by beating John Stamp to give Pumas a 6-4 victory. In between he lost to Jacob Midson. Usual hat-trick here for Andy Smith but Chris Belton remains out of form with just a win over Danny. Jacob notched up a brace for Glory.

Meanwhile, bottom side NP Vantage, who did not play this week, are now the highest ranked team left in the Cup competition. Good luck to them in the next round.

Player of the week is Keith Carrington.

With one more week remaining of League fixtures, Chackmore Hasbeens have joined Open University Primes in mathematically assuring a promotion spot, which just leaves the issue of which of the two will claim the Division 2 title, this season. Both won again, this week, against potentially tricky opponents, whilst Hasbeens did close the gap by one more point, to fittingly set up a final week clash between the top two teams. Behind them, Milton Keynes Tornadoes now seem set to finish in third spot, ahead of Milton Keynes Classics, with another Milton Keynes team, Hit ‘n’ Hope, in fifth spot, although Mursley Swallows are provisionally just three points back, and with seemingly the easier final match to come. Mursley Hawks and Newport Pagnell Lagondas are both now mathematically safe from relegation, in seventh and eighth positions, leaving Milton Keynes Blades and Greenleys Cardinals as the bottom two, with Blades having edged a single point ahead of Cardinals, with one week to go.

In this week’s results, Primes racked up win number 16 in a row, although they were pushed hard by the youngsters of third placed Tornadoes, with Primes just coming through 6-4. Player of the match, however, was Nicholas Wong, who won all of his singles, with Tornadoes’ reserve, Daniel Shea, adding their extra win. Primes’ wins came by way of two apiece for both Larry Lung and Patrick Wong, who also combined in the doubles to defeat Nicholas and Tanmay Tijare, plus one win from Charles Tien.

Despite Primes’ run of wins, second placed Hasbeens have been on their own run of wins, now up to six in a row, and very slowly narrowing the gap on the leaders. This week, they again closed the margin by one more point, winning 7-3 against fourth placed Classics. Once again, Bub Burman was unstoppable, winning all his games, to extend his winning run up to an amazing 29 in a row, although he had one of his toughest games in that sequence, against Dylan Cox, who took him to 11-9 in the fifth! Andy Whitehead also won all his games for Hasbeens, plus he and Bub also extended their amazing doubles record to 14 wins without defeat against Dylan and Masoud Nassor. For Classics, Dylan, Masoud and Nick Markham each won one, although Nick was pushed all the way by Hasbeens’ reserve, Colin Beckett, with Nick scraping through at 13-11 in the decider.

The above two results leave Primes still five points ahead of Hasbeens, with the pair aptly playing each other in the final week, but meaning Hasbeens would need an unlikely 8-2 (or better) win to take the title, against the team who have reeled off 16 consecutive wins, and who beat them 8-2 the first time they played. However, Hasbeens had a less than full strength team that time, and it remains their only loss, and they have been in great form, recently, so there is still some work to be done by both teams!

Hit ‘n Hope in fifth, hosted Mursley Hawks in seventh, and the result went just the way of the League positions, as Hit ‘n’ Hope edged through 6-4. Marco Hahn and Mike Ainsworth each won twice for the hosts, with one win for Ivor Howard, plus a doubles win for Marco/Ivor, making up their six sets. Player of the match, however, was Mervyn Phillips, who won all his singles for Hawks, including handing Marco a rare defeat, and maintain his top spot in the Averages. Andy King also won one for Hawks, although both Andy King and Andy Palmer lost out by the narrowest of margins (9-11 / 14-16 respectively!) in deciding games vs Mike, to deny Hawks the draw or win.

There was an odd match when Swallows in sixth place, hosted equal ninth placed Cardinals. The Mursley trio of Peter Sear, Roger Shelton and Martin Johnson were all present, as was Gary Viner for Cardinals, but no sign of the other two visiting players. Messages were left, but the match started, assuming they had just been delayed. Martin took on Gary, and despite Gary going ahead early on, Martin came through in four legs. As the second away player had still not turned up, Gary went on again, to play Peter. This followed a similar pattern to the first set, as Gary went ahead early on, but Peter fighting back, and this time it went to a decider, which Peter just won. By now, it was evident that Cardinals would only have one player, as it seems the other players had thought this was a Cup week!  Gary gamely then played his third singles in a row, against Roger. Roger built up a two leg advantage, but Gary’s defence and counter attacks started to pay dividends, and he drew level at two sets all, to set up yet another decider, but unfortunately for Gary, he again just lost out, to leave him having won five legs on the night, but ended up with no wins! The jury is out as to the final result for the match, but potentially it could be a 10-0 to Swallows?

Eighth placed Newport Pagnell Lagondas collected a big 9-1 win over equal ninth placed Milton Keynes Blades, which ensured they were safe from relegation, irrespective of any other results.  There were three wins each from Glen Davison and Chris Horn, backed up by two from Roy Read, plus a doubles win by Glen/Roy, whilst the one consolation win for Blades came in the final set of the night from Brian Evans, but unfortunately there were no wins for either Bill Tyler or Andy Phillips. Nevertheless, the one point does see Blades move just ahead of Cardinals at the foot of the table.

Player of the Week : Mervyn Phillips.