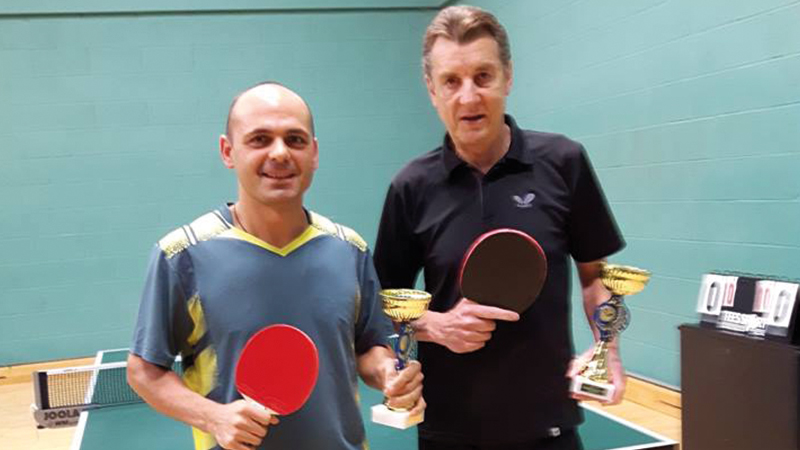 A small but very enthusiastic entry of 25 competed for the main prize of the day, the Handicap Singles title, with Ioan Constantin emerging as the worthy winner.

16 players qualified for the knock-out stage from 8 initial groups, the handicap’s ranging from -12 to + 16 with games played under the 21 up scoring system and sets best of 3.

Ioan, playing off scratch, just sneaked through as a group winner with a 21-18 deciding game triumph over David Broome. Straight games wins followed against Bill Tyler and Danny Sedgwick on his passage to the semi-final where I took him to a decider. Meanwhile Alan Cherry was as usual making light of the top handicap to power his own way through to yet another final  (his 6th with the previous 5 all won), culminating in a semi-final victory over Mervyn Phillips. The final proved to be a surprisingly one-sided affair. With plenty of points to play with, Ioan chanced his arm from the start and his attacking ploy paid handsome dividends. With early points in the bag the set settled into the more attritional battle that was expected from this pairing, for Ioan to run out a 21-15, 21-12 winner. Bear in mind that Alan had been playing non-stop for over an hour by this stage and still had 2 more finals to follow, while his future opponents were resting. Full credit though to a marvellous victory for Ioan in his debut season in the League.

This competition is restricted to Division 2 players and below. Tenacious Mervyn Phillips must have been favourite for the event but took a tumble to an equally determined Dylan Cox in the semi-final. After being completely outhit for the first two and a half games, Dylan changed his tactics to a more defensive mode which brought him surprising success with an ultimate 11-9 in the 5th game victory. With the never to be forgotten Kelvin Choong no longer playing in the League I though we’d seen the last of successful lobbing from 20 feet behind the baseline (although Nick Howard does it occasionally) but here was young Dylan invoking the spirit of Kelvin. Very entertaining to watch but Mervyn must be wondering how he managed to lose this one. Bill Tyler had done well in the other half of the draw to reach the final but was outclassed by Dylan, playing in a more conventional style this time.

With Alan Cherry’s name in the draw there was only ever going to be one winner as there aren’t many players in the country who can beat him with this equipment. Mervyn Phillips came very close though, taking Alan to 11-9 in the 5th in his quarter-final. Straight games wins for Alan followed against me in the semi and Craig Brown in the final, after Craig had ousted a belligerent Sue Lewis in his semi.

By far the most interesting final was the Pot Luck Doubles one (with partners drawn at random after the best were separated from the rest) which brought together 4 players of contrasting styles, Alan Cherry & Barbara Barber and Sue Lewis & Danny Sedgwick, in two evenly matches teams. In the semis Alan/Barbara had overcome Ollie Horswell & Edward Locke 11-9 in the 5th whilst Sue/Danny saved a match point when getting past David Broome & Sue Marchant. The final see-sawed unpredictably but Sue/Danny looked to have the title won when Sue had an easy smash to make the score 7-3. But, following the best rally of the match, she missed a sitter to trigger panic stations in her team who were soon trailing 10-8. But Alan/Barbara couldn’t finish them off and it was left to Danny to win the title for his side with a sublime forehand cross-court drive on a second match point for a 13-11 finish. The talented youngster has already made a name for himself by toppling Michael Wilkins in a Premier League match this season and I’m sure this will be the first of many winners trophies for him.

So, a good day’s play for all and a great pity that more players didn’t take advantage of what was on offer for them here. It goes without saying that the day went without a hitch thanks to the brilliant tournament organisational skills of Neil Riddy, for whose services the League are, as always, extremely grateful.