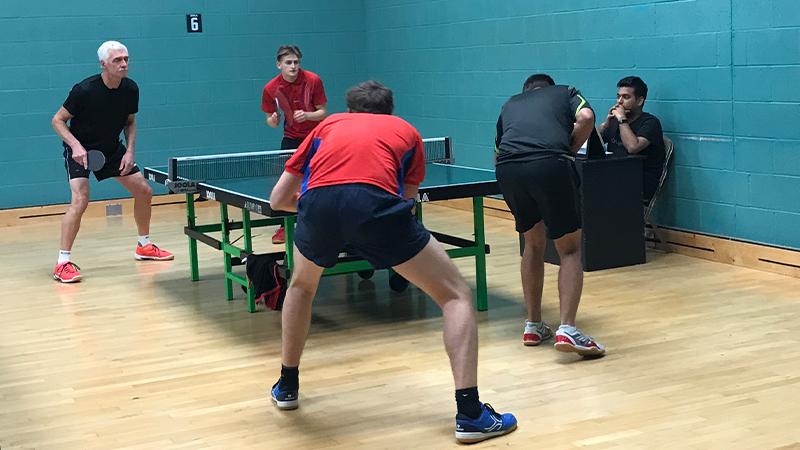 I was fortunate to be at Kingston on Wednesday night to witness a majestic display of controlled attacking from Jamie Hendy as he battered his more experienced Greenleys Monarchs opponents into submission. And his MK Sasaki side certainly needed a prime performance from him in order to maintain their unbeaten record this season with a share of the evening’s spoils, as they had division 1’s Terry Lau filling in for them alongside regular Michael Wilkins. Monarchs fielded a strong side in Dan Appanna, Iain Dumett and, playing against his former team for the first time, Dakshinamoorthy Thopay. All lost to the talented youngster, who continues to progress at a good pace. Jamie also coaxed Michael to the doubles win and Michael sealed the draw by completely blunting Iain’s erratic attack.

New daddy Nick Howard was back in the Greenleys Kings’ team that played out another draw with bottom side MK Kingpins. Only a brace this time for Nick as he found Craig Brown too hot to handle. Guy Sparrow joined him on 2 wins and Jordan Wood one, enjoying a debut win over Craig. For Kingpins, looking certain for relegation at this stage, Craig got a good brace with Dave Allison and Mark Purcell both on single wins.

Birthday boy Alan Cherry took a rare night off from MK Spinners duty but, far from missing their revered skipper, Spinners went out and won for the first time this season, and with a division 1 substitute too. Charles Philippe hit a hat-trick for Greenleys Warriors but his only support came from Ricky Taiwo with a single as Ollie Horswell remained winless. Iaon Constantin secured a valuable win for Spinners to back up a brace a-piece from regulars Gary Jones and Neil Massa, who also combined to snatch the double set 11-9 in the 5th in their 6-4 win.

Player of the week is Jamie Hendy.

This week marks the half way point of the League programme with the four MK club teams all well ahead of the rest. The fact that, on their day, they are all capable of beating each other was demonstrated this week when Pumas ended my own Topspin side’s unbeaten record, the last to fall in the top 5 divisions. Pumas raced into a 4-0 lead with some typically sterling play from Andy Smith, Julie Snowdon and Chris Belton and did enough from then on, with main man Andy completing a splendid hat-trick, to hang on for a 6-4 win. I bagged a brace and my Topspin team-mates Russell Penn and Mervyn Kelly got a single each in response.

2nd placed MK Phoenix had the week off while the last of the quartet MK Powers fought out a draw with a tough looking Greenleys Eagles team thanks to a best of the season showing from Clare Styles. The Powers’ girl grabbed a decent brace alongside Jit Pitamber with Pete Tillotson one. Iain Lindsay was the star of the show though, as is often the case, with a maximum for Eagles, who won the double set leaving Geoff Callaway and Barry Bishop with just a single win between them.

St.Christopher Van Hire beat Newport Pagnell Vantage 8-2 with just one singles lost in a match where half the sets went the distance with Sue Lewis’ win over David Broome being one of them. Maximums here for Paul Haigh and Jez Wilcox and blanks for Tony Ardis and Mike Howard. But Vantage took the doubles, leaving Van Hire bemused as to how they have managed to lose all 8 doubles sets so far after winning 17 from 18 last season.

After their disastrous start to the campaign bottom of the table Woburn Sands Data, despite losing 6-4 to Greenleys Glory, continue to improve with 2 wins each from James Molloy and Dave McGarragh. James beat Ian Brown and Scott Dixon but was taken down in straight games by Christine Scaysbrook. Christine only lost deuce in the 5th to Dave, who also beat Ian. Paul Hamer playing up from Division 3 for Data and took Scott to 5 games after losing heavily in his other sets.

Player of the week is Andy Smith.

The big clash of the top two in the division saw Chakmore Hasbeens, missing a couple of their regular players, against the in-form team, OU Primes.

Primes took full advantage, and came away as 8-2 winners, thereby extending their lead at the top to eight points at the halfway stage of the League schedule (how has that happened .. it’ still November!), and a full 15 points clear of third place. In the match, Primes raced away to a 6-0 lead, before Hasbeens finally got on the scoresheet, to salvage a couple of points.  Patrick Wong was the one unbeaten player on the night, and extended his run of wins to 17 in a row, and was backed up by two wins apiece by Martin Lok and Charity Wong.  The two Hasbeens wins came from the Whiteheads, as Andy beat Martin and Chris beat Charity, for a first loss of the season for Hasbeens, plus their first doubles loss, but conversely, it was an eighth consecutive match win and doubles win for Primes.

MK Hit ‘n’ Hope consolidated their third-place spot with a big 8-2 win versus MK Classics, as both Ivor Howard and Andy Frearson recorded maximums, backed up by a pair of wins from Mike Ainsworth, with the ones to get away being the doubles as Ivor & Mike lost to Masoud Nassor & Nick Markham, whilst Masoud also won one singles for Classics. Ivor’s wins took his run of singles wins into double figures, as he reached ten in a row.

Mursley Swallows remain in fourth spot, as they collected a fourth win from their last five matches, beating Newport Pagnell Lagondas 6-4, although Chris Horn took the individual honours, as he won all his singles on the night. There were two wins apiece, plus the doubles, for Roger Shelton and Martin Johnson, plus one for Peter Sear, for Swallows, whilst the other win for Lagondas came from Glen Davison. Roy Read came away without a win, but came agonisingly close, twice losing out close in the deciding game!

MK Blades, after 7 losses in a row, finally grabbed a 5-5 draw against Mursley Hawks, and also edged off the bottom of the table, going one point ahead of Greenleys Cardinals. Mark Thomas and reserve, Rupery Greyling, each won twice, with Brian Evans chipping in with a further win. For Hawks, there was one win for Andy King to add to the regular maximum form Mervyn Phillips, who also teamed up with Andy Palmer to take the doubles.

The halfway point of the League season now reached, the top two teams, Primes & Hasbeens, have a potentially significant lead at the top, and look clear favourites to clinch promotion, although MK Hit ‘n’ Hope could mount a challenge if they can get their best team out more regularly.  In mid table, the positions change almost every week, as there is little to choose between most of the teams in the division, however, at the bottom of the table, Blades and Cardinals are both a few points adrift of the remainder, so appear to be the teams likely to face relegation, but, with another nine weeks of matches to go, it could yet all change!?

Player of the Week : Patrick Wong.