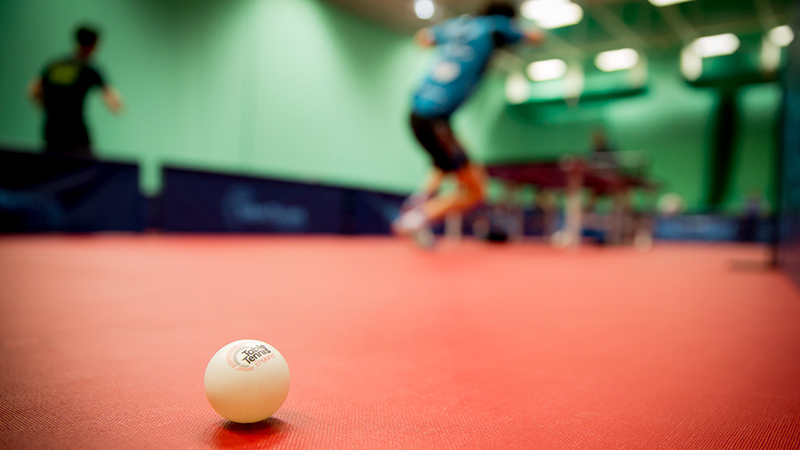 PREMIER‎
‎ ‎
‎Two of our former Championship winning teams fought out an exciting draw late into Wednesday night this week as MK Sasaki’s Neil Bigrave, returning to the game after 25 years, trebled his win tally for the season after excellent 4-game successes over MK Spinners’ Jecu Aurelian and Tim Cheek. It might even have been more for Sasaki with Nicolas Wong hitting one too many forehand drives off the table at 10-9 down in the 5th to Jecu and Michael Wilkins close to inflicting Alan Cherry’s second defeat of the season, when standing at deuce in the 4th and 2-1 up in games in their encounter. So the usual treble for Alan was supplemented by a brace from Jecu as Tim posted a rare blank for the League leaders. A great match. ‎
‎ ‎
‎Greenleys Warriors move into the giddy heights, for them, of second place after a comprehensive 8-2 win over former leaders MK Pumas. The scoreline was slightly flattering as the battling Pumas side forced half the sets to a 5th game without winning any of them, Julie Snowdon’s decider with Darren Ward going to 14-12 was the closest. New recruit Hakan Karaagac grabbed the Puma points with wins in the first and last sets of the match with victories over Ollie Horswell and Darren. Warriors’ main man was the ever exuberant Ricky Taiwo with another superb performance. Chris Belton was the other Puma. ‎
‎ ‎
‎The all Greenleys derby between Monarchs and Kings was a one-sided affair as, after Guy Sparrow’s opening win against Dave Beddall, it was a case of Monarchs reeling off the remining sets without too much resistance. So, hat-tricks for Dave’s team-mates Magda Kozbek and Tomek Nowakowski and blanks for Jordan Moss and, Div. 1 substitute, Dan Englander. ‎
‎ ‎
‎‎‎Player of the week : Ricky Taiwo‎
‎ ‎
‎ ‎
‎DIVISION 1 ‎
‎PHOENIX RISE TO THE TOP ‎
‎ ‎
‎It’s been a busy week for the players of MK Phoenix and Chackmore Hasbeens. In addition to fulfilling their scheduled League fixtures on Tuesday they met each other 24 hours later to play their outstanding fixture from the opening week. Phoenix could only manage to field a weakened side on the Tuesday and suffered a 6-4 defeat to Open University Primes, whose Ning He was in, dare I say, prime form with a hat-trick of wins over Alan Bolding, Terry Lau and, a Div 2 substitute, Pedro Anastacio. Andy Tan chipped in with two wins and James Zeng one. But a different story was enacted the following night when a full strength Phoenix outfit of Alan, Mervyn Phillips and Gerald Ridgway swept aside bottom of the table Chackmore Hasbeens 10-0.  As always Bub Burman with Chris and Andy Whitehead for Hasbeens. ‎
‎ ‎
‎The Chackmore trio had fared a little better the previous night when playing against fellow promotees MK Hit ‘n’ Hope, only going down by 7-3. Bub and Andy picked up a win apiece and together won the doubles. Paul Tompkins and Ivor Howard enjoyed hat-tricks for Hit ‘n’ Hope with a Mike Ainsworth win completing the scoreline. ‎
‎ ‎
‎Former leaders MK Powers gave a second outing of the season to new recruit Keith Carrington, who picked up a crucial win over Greenleys Glory’s Christine Scaysbrook to add to a fine treble from Jit Pitamber and a brace from Sarah Hudson, which preserved Powers’ 100% record.  Jacob Midson got a pair for Glory and John Stamp one in their 6-4 defeat. The match brought together our first all girl battle of the season with Sarah triumphing over Christine 11-7 in the decider. ‎
‎ ‎
‎My MK Topspin team had a 7-3 win over Leighton Buzzard Avengers with a hat-trick from me supported by a Mervyn Kelly brace and a Russell Penn single, plus a fine doubles win from the pair. Newcomer Alex Du Noyer shone for Avengers with a brace himself and Leigh Hurkett beat Russell. The much travelled Richard Hardy was the other Avenger. ‎
‎ ‎
‎‎Player of the week : Ning He‎