Mitchell much too good 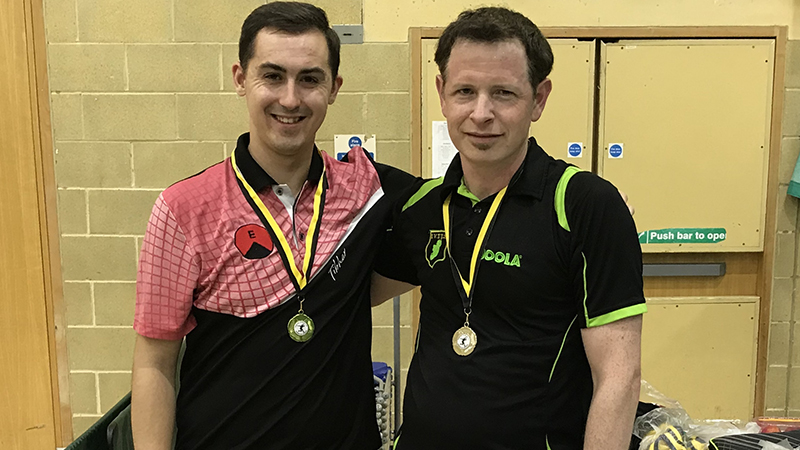 There were three bands of eight players in the seniors and three bands in the vets too, two with eight players and one with seven players. Ten players played in both vets and seniors. England No 36 man, Mitchell Jones (Bd), entered and lived up to his top seeding, winning the Senior Band 1.

No 1 seed Rory Scott (IRL) won six of his seven matches, losing a maximum loss to Vadym Krevs (He), who played out of his skin to win 3-0 (7, 9, 8). Scott still won the band though, as all other players lost at least twice. Scott also came very close to losing to Dean Rose (K), having trailed 8-10 in the fifth end, but eventually winning 14-12. He only dropped one end (to second seed, Daniel Heo (Sy) in his remaining matches.

Heo got fourth place, with four wins, including a fifth-end win over Marlow. Samson Bekele (Sy) and Paul Martindill (E) both won three times, but Bekele finished fifth, as he beat Martindill (3-2). Indeed, Martindill won two five-gamers of his own against Heo (12-10 in the fifth) and Rose (15-13 in the fifth). Marlow got two wins and came seventh. Rose didn’t win any and finished eighth, but lost three five-setters, the aforementioned two and also to Ellis.

Top seed Roger Pingram (K) won all seven of his matches to win the gold medal. He had one five-game match, against William Panes (Wa), which he won 13-11 in the fifth.

There was a three-way countback for second place, as second seed Tony Rowell (Sx), third seed Randall and Panes all won four. Rowell got the silver medal, as he beat both Randall and Panes (both 3-1). He also won a close five-setter against Ken Lewis (E) from 2-0 down. Panes came third, as he beat Randall in five.

Both Chris Pullinger (Sy) and Bob Lowe (Sx) won three matches, but since Pullinger defeated Lowe, he came fifth. Pullinger, who has gained over 320 points on the new ranking list, had a good five-game win over Rowell. Lowe also beat Rowell 3-1, as well as beating Sue Pingram (K) in five sets, to whom he lost in the previous tournament. Lewis came seventh with two wins.

No 1 seed Alan Papier (Av) confirmed the rankings, by winning all six of his matches. He won five of them very comfortably 3-0, but went 0-2 down in games to the unranked Mick Stanners (Sy), who was playing in his first ranking tournament and finished as the silver medallist.

Jordan had to settle for third place. She was involved in three five-game matches in total, as she overcame both Graham Underwood (Ha) and Louise Newman (Sy) in five. Stanners also won in five against Colin Barham (E).

Barham and Underwood both won three matches, but Barham got fourth place due to his win (13-11 in the fifth) over Underwood. Newman got sixth place, with a fifth game win over Tony Power (Sx).

Rory Scott’s winning streak in Sussex Ratings tournaments came to an end, as he met his match in Mitchell Jones, ranked at the time 146 place above him in the National ranking list. After a close first game, which Jones shaded 16-14, Jones seemed to step up a gear and won 11-6, 11-4 in a classy display.

Jones had been relatively untroubled in most of his remaining matches, winning 3-0 three times and 3-1 twice (against Aris Kapsanakis (He) and Marcin Szram (So)), but he found Tom Pomej (Sx) a tougher challenge and after four ends, they had both won 37 points and Jones eventually won 11-8 in the fifth.

Scott won five matches 3-0, but came unstuck against Szram, despite leading both 5-1 and 10-8 in the decider, losing 13-11 in the end. Szram and Pomej also both won five matches, Pomej overcoming both Heo and Lewis 3-2. Therefore there was a three-way countback for the silver medal, with Scott taking it, as he won 3-0 against Pomej and lost 2-3 to Szram.

Pomej came third as he defeated Szram 3-0. Heo came fifth with three victories, including a five game win over Kapsanakis. There was another three-way countback for places six to eight, as three players all won once. The order, based on sets ratio of the matches involving just the three players was: 6th Kapsanakis, 7th Lewis, 8th Panes.

As was the case in all of the bands so far, the No 1 seed won yet again. Krevs won six of his seven matches, which was enough to get him a gold medal. The one match which eluded him, was a four-game loss to Brandon Bennett (Sx).

He also won in five games against second seed Juan Munoz-Lopez (Sx). Dennis Hayden (Sx) won five times and came second. As well as losing to Krevs in four, he lost in five to Marlow and beat Bennett in five. He also broke his mental block against long pimples players, beating Roger Pingram 3-0 and Sue Pingram 3-1.

Marlow, Bennett and Munoz-Lopez all won four, so there was a three-way countback, with Munoz-Lopez emerging third, Bennett fourth and Marlow fifth. Indeed, Bennett could have finished higher, as all three matches he lost were 3-2 (against Hayden, Marlow and Roger Pingram). Roger Pingram came sixth with three wins and Richard Cosens (Sx) finished seventh, with two wins.

None of the players in this band had any national rankings, so the seedings were based on Table Tennis 365 Ratings. Top seed on this basis was Freddy Goodall (Sx) and second seed was Karl Rideout (K), with Stuart Vincent (Sx) the third seed.

Goodall and Vincent, who both play for Horsham Spinners TTC and indeed have just won Division 2 of the Horsham Spinners Summer Team League Division 2 together, both won six out of their seven matches. Since Goodall couldn’t cope with Vincent’s defensive combination bat style and lost 3-0, Vincent got the gold and Goodall the silver.

Vincent was defeated in three close games by Mina Matta (Sx), who won five matches. Rideout also won five times and came third on countback, based on the fact he beat Matta (in five games). Matta had earlier scraped over the line 11-9 in the fifth in his first match against Newman.

It was a group ‘of two halves’ with the remaining four players being close in standard as well. Stanners came fifth with three wins, including a 12-10 in the fifth victory over Daniel Woods (Sy). Woods won twice and came sixth. Peter Vincent (Sx) won in five ends over Newman to get seventh place.