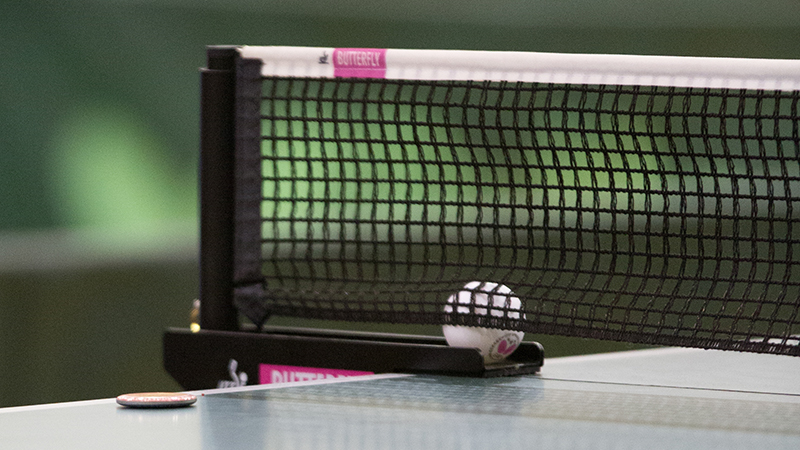 Bottom side Greenleys Kings wait all season for a win and then 3 come along at once. This latest one was a historic victory for the club’s second string team over Stephen Baggaley’s flagship unit Monarchs, as it was the first time since the club’s formation, 25 years ago, that Monarchs have lost a League match to another Greenleys side. The currently unstoppable Guy Sparrow produced what is becoming his now regular maximum, dependable Nick Howard chipped in with a brace and Jordan Wood came up with a most timely win, following a run of 8 defeats, over Ian Johnson to clinch the victory which takes them to within 3 points of 5th   placed Monarchs. Tom Nowakowski took a brace for the full strength Monarchs side.

The title contenders both lost for the 2nd week running, MK Sasaki 6-4 to MK Kingpins and MK Spinners 7-3 against MK Bandits, which leaves Sasaki 3 points clear of their rivals.  Kingpins’ Dave Allison produced his season’s best with a hat-trick, that included Dan Smalley, and Mark Purcell came up with a brace with Kingpins also taking the doubles. Division 1’s Russell Penn, who’s been in great form lately, filled in for a depleted Sasaki and beat Julian Adams.

MK Spinners went down to their 8th  defeat with just 2 wins from Alan Cherry this time and a solo effort from Neil Massa. Newly crowned League Champion Matt Evans got a maximum for Bandits and Jamie Hendy a brace.

Only 2 points separate the 3 teams vying for the 2nd  promotion spot after this week’s round of matches. My MK Topspin side were 8-2 winners, with maximums from Russell Penn and myself, over MK Powers while our rivals St.Christopher Van Hire and MK Pumas failed to win against lower placed opposition.

Van Hire drew with MK Phoenix after surrendering their fantastic unbeaten doubles record for the season to MK Phoenix’ Alan Bolding and Carl Furness, a record all the more remarkable as Van Hire had only won 5 doubles from 21 last year. Standard hat-trick for Biao Wang who ends his League season here with an impressive 94% and will be hot favourite for the ‘Top 8’ competition on 9th April. Alan bagged a brace for Phoenix, his loss to Biao being only his 2nd defeat in his last 25 sets.

Pumas were also held to a draw despite leading a weakened Woburn Sands Data team 5-3, the usually reliable finisher Andy Smith faltering this time when going down in straight games to James Molloy in the final set. This completed James’ hat-trick on the night and leaves him on a 9 set winning streak with my Topspin side to play next. Andy Jenkins came up from Division 3 to beat Chris Belton as his Pumas team-mates Andy and Keith Carrington recorded a brace each.

Runaway leaders Greenleys Warriors beat 9th  placed O.U. Primes 8-2 with only a defiant Xiangyu Gau standing between Warriors and another whitewash. His victims were Ricky Taiwo and, one of the heroes from last Sunday’s League Championships, Ollie Horswell. Half the sets went to a decider including hat-trick boy Jordi Foraster’s 11-8 in the 5th winner over Xiangyu.

Finally, just the one win to celebrate for bottom team Chackmore Hasbeens on their visit to Greenleys Eagles when Bub Burman got the better of Dave Plumb. Maximums here for Geoff Callaway and Iain Lindsay.

Player of the week is Xiangyu Gau.