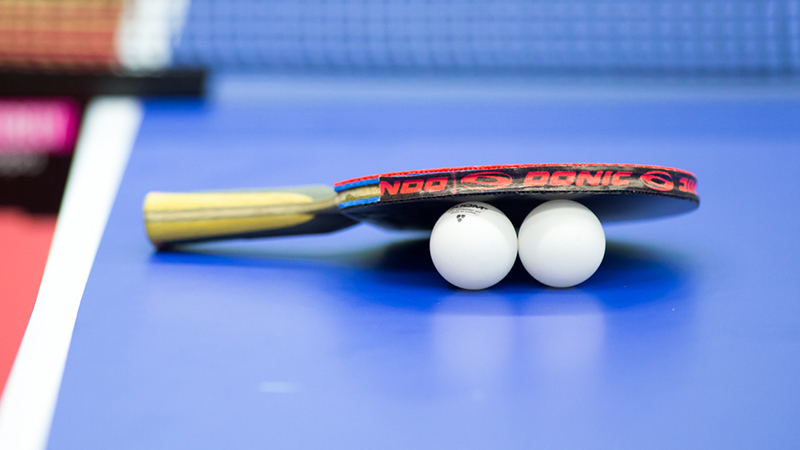 The only past winner in the draw for the Championship Singles triumphed again as big hitting Matt Evans beat Alan Cherry in straight games in a repeat of the 2016 final. The semis saw Matt drop a game to the much fancied Dan Smaley, while Alan fought back from 2-6 down in the decider against Nick Howard. There were the usual upsets to be had in the 39 player draw, the biggest being Mervyn Phillips despatching of Andy Smith in a group stage match. Mervyn plays for lowly Mursley Hawks in Division 3, is fairly new to the sport and practices endlessly on a table in his garage with mentor, old hand Vic Sutton. Unfortunately for Mervyn, Andy’s positive response was to beat Tim Cheek in his final group match to ensure that he made the main draw (along with Tim), thus pushing Mervyn into the Consolation ‘Plate’ event. Here Mervyn beat a host of established players to reach the final where he went 2 games up before losing to Chris Belton. Certainly a new name for the future.

Dan Smalley and Nick Howard teamed up to retain their Championship Doubles title in a tremendous final over Matt Evans and Ollie Horswell. The young guns raced into a 2-game lead before being pulled back and then at 9-9 in the 5th Dan got the slightest edge return to a Matt serve. But then sometimes you need a bit of luck to win these titles. Easy semi-final wins in this one for Dan/Nick against Michael Wilkins/Jamie Hendy and for Matt/Ollie against Alan Cherry/Tim Cheek.

8 pairs contested the Restricted (to Div 3 players and below) Doubles with Jim Brogan and Alan Creed coming through in the final against Bill Tyler and the ageless Audrey Robinson.

In the first of the age restricted events Ollie Horswell continued his fine day with a decisive win over close rival Jamie Hendy in the Under 18s final. And Michael Wilkins was prominent as usual in the 2 Veteran events in which he already holds unique records in being both the oldest over 40s winner at 61 years 51 days and the youngest over 60s winner at 60 years 53 days. Michael lost in the over 40s to Alan Cherry but beat Andy Smith in the over 60s event.

On the distaff side a stronger field than last year made it difficult for Sue Lewis to retain her triple crown and in the end Super Sue had to settle for just the Womens Doubles, pairing up with Christine Scaysbrook against Jordan Wood/Audrey Robinson. Christine beat Sue to win the Veterans Singles and Jordan beat Christine to take the Womens Singles. A nice touch here as 8 times Champion Sarah Hudson made a fleeting appearance in the hall to meet old pals and umpire the final. Sarah has not been too well recently but hopes to return to action again in the near future.

Jordan then paired up with Nick Howard to take the Mixed Doubles, Jordan’s precise hitting carrying a weary looking Nick in what was the last set of a tough day’s play, to victory over 4 games against Sue and myself.

Finally, a huge thank you to Neil Riddy and his band of helpers for running the Tournament. It always goes like clockwork, not least due to Neil’s meticulous pre planning. Thanks Neil for a great day out for all the players involved.