William Michell (Sx-Horsham Spinners TTC), finally won an event at a 2 Star, having been a runner-up an impressive 11 times, at the first Jarvis Sports Burgess Hill 2 Star of the 2018-19 season. 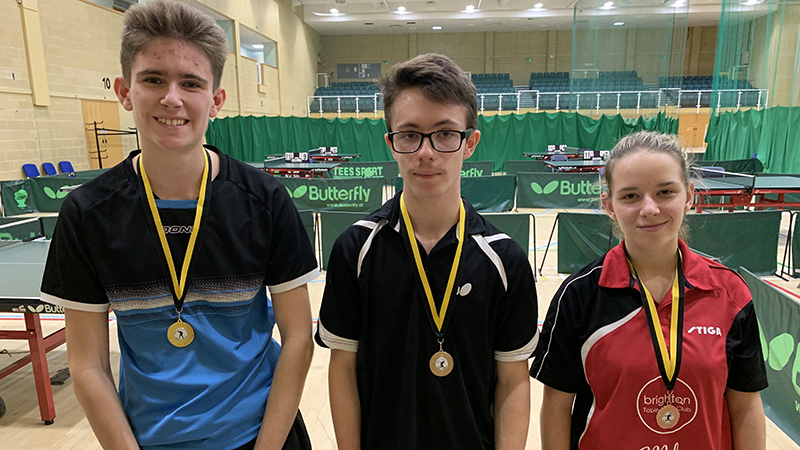 The first Jarvis Sports Burgess Hill 2 Star of the 2018-19 season took place on 1st December at the Triangle Leisure Centre. There was a good entry of 45 players for this one.

The U13s and U15s were played in the morning and the U14s and U18s in the afternoon. Joseph Hunter (Mi) elected to play U14s and U15s and, despite being still U13, won both events comfortably, having been seeded to do so.

William Michell (Sx-Horsham Spinners TTC), finally won an event at a 2 Star (the U18s), having been a runner-up an impressive 11 times and having been very close to getting the gold on a number of occasions.

In the quarters, top seed Jenson Moreno (Mi) was usurped 3-1 by Louis Vaughan-Drake (Sx), who is about 350 points below him. Vaughan-Drake had also defeated Chotai in four in Round 1. Sixth seed Jacob Archer (Sy) prevailed over third seed, Charlie Nabarro (Mi) in a very close match 11-9 in the fifth. Max Wilson (Sx) overcame Davies in four and second seed Ojasvii Borah (Sy) knocked out Anna Piercey (Bk) in four.

In the semis, Archer put an end to Vaughan-Drake’s good run in three and Borah beat Wilson also in three. Archer was triumphant over five sets in the final. For the bronze medal, Wilson beat club-mate Vaughan-Drake for the second time that day, in straight sets. Leon Cain (Sx) emerged the winner in the consolation final at the expense of Rees Christina (E) in the deciding game.

This consisted of 21 players in six groups. In group 5, Wilson had a good win over Borah, ranked about 100 points higher, a reversal of the semi-final result in the U13s earlier, but he fell in Round 1 to Archer in three.

In the semis, Hunter put paid to Nabarro in three and Moreno upset Crawcour by 13-11 in the decider. For the gold medal, Hunter was too strong for Moreno, winning in three. Crawcour got the bronze medal, ending Nabarro’s chances in three. Davies defeated Louis Treffel (Sx) in four in the consolation final.

15 players contested the U15s in four groups. In Group 3, Alessio Marrocco upset the seedings, by defeating No 3 seed, Ben Barbarash (Mi), who has 190 points more than Marrocco, in five games. In group 4 there was another unexpected win, this time for Jed Brackenridge (Do), over fourth seed, Ollie Michell (Sx-Horsham Spinners TTC) in straight sets, with about 200 points between the two players. Michell had also struggled in his first match, only winning in five vs Jacob Zakaim (Mi), who has about 400 points less than Michell.

In the quarters, favourite Hunter eased past Akash Shah (E) in three, Barbarash fought past Brackenridge in four, Michell accounted for Marrocco in three and Crawcour won comfortably vs Leo Sochor-Grethe (Mi) in three.

In the semis, Hunter dropped one end vs Barbarash and Crawcour repeated the feat vs Michell. Hunter dominated the final, only conceding 15 in points in total. Michell was victorious in the bronze medal match, taking out Barbarash in three. Jai Chaudhari (E) was the consolation champion, with a 3-0 victory over Robert Wood (E) in the final.

In the semis, Evans knocked out MacDonell in three, but Svajdlenkova took an end off Michell. In the final, Evans was first out of the blocks, winning the first two ends convincingly 11-4, 11-4 and indeed led 10-7 in the third, before succumbing 12-10. Michell turned the tide, winning the fourth 11-4, after winning 12 points in a row to go 7-0 up in the fourth. He was always ahead in the fifth, taking it 11-7. If at first, you don’t succeed, try, try again.

Svajdlenkova repeated her 3-1 victory over MacDonnell in the third/fourth place play-off to get the bronze. Zakaim won the consolation final with a close 3-0 win over Rio Alvarez (Sx).

The next cadet/junior two stars in Sussex will be on Sunday 20th January in Horsham and Saturday 9th February in Burgess Hill. Entry forms are available on the Table Tennis England website.