The second Jarvis Sports Burgess Hill 2 Star of the 2017-18 season took place on 10th June at the Triangle Leisure Centre. 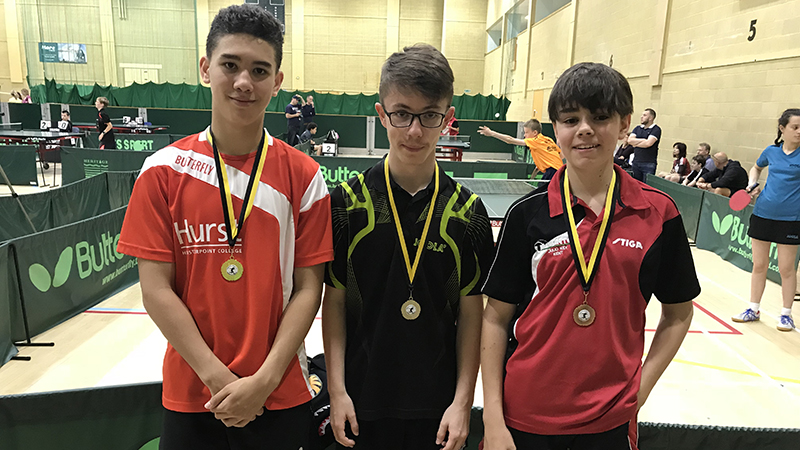 The second Jarvis Sports Burgess Hill 2 Star of the 2017-18 season took place on 10th June at the Triangle Leisure Centre.

Again there was a very low entry of 30 players for this one, which was just enough to run the event. The U12s, U14s and U16s were played in the morning and the U13s and U15s in the afternoon. U18s was cancelled due to a lack of entries.

Both Jacob Evans (Sx) and John Strang (Sx) won gold and silver medals, as they met in the gold medal match in both the U15s and the U16s and they shared the spoils, with one win each.

There were 11 players in this age group. There was only one upset at the group stage, which was Tommy Lyons (Mi) beating No 3 seed Daniel Clark (Sy) 3-0 in Group 3. In the quarter-finals, Clark beat Anna Piercey (Bk) 3-0 and Lyons defeated James Donald (E) also 3-0.

In the final, Noel won 3-0. Lyons had a good win over Lakatos 3-1 in the bronze medal match. In the consolation final, Rahil Rehman-Furs (Sx) accounted for Rachael Iles (Bu) in four.

There were 12 players in this category in four groups. As with the U12s, there was only one surprise at the group stage, which was again the No 3 seed being defeated, but the roles were reversed, as this time it was Clark who got the unexpected win (over Lakatos).

In the quarters, top seed Harry Yip (Sx) knocked out Donald in three, Lakatos stopped No 4 seed Abbie Hurley (K) in her tracks in four, Clark saw off Saskia Key (K) in five and No 2 seed Ben Poulter (Ha) put paid to Lyons in three.

In the semis, Yip took out Lakatos in four and Poulter ended the run of Clark in three. Yip won the final in four. Lakatos won the bronze medal match in four games. Sasha O’Halloran (Sx) defeated Iles in three in the consolation final.

This consisted of nine players in two groups. In Group 2, Isabel Webb (K), the lowest ranked player in the group, got three unexpected wins to finish second in the group. In the semis, No 1 seed Poulter suffered a shock defeat to the in-form Webb in four, but Bracken was not to be denied, winning 3-0 against William Agombar (Ha).

13 players contested the U15s in four groups. In Group 3 Yip almost fell victim to the ‘curse of the No 3 seeds’, but managed to overcome Daniel Broner (E) by 13-11 in the fifth game. In group 4, fourth seed Ollie Michell (Sx) lost to the slightly lower ranked Bracken.

In the quarters, No 1 seed Evans knocked out Sam Flaum (He) in three, Bracken saw off Broner in four, Yip beat Michell in four and No 2 seed John Strang (Sx) defeated Benjamin Sivathanu (E) in four.

In the semis, Evans was too strong for Bracken, winning in three and Strang beat Yip in four, after dropping the first game. Evans overcame Strang in a close four-game final. Yip beat Bracken in the bronze medal match 3-1.

Six players took part in the U16s in one large round-robin group. Top seed Strang won the group, but only after being pushed to 11-5 in the fifth end by Evans. Strang won his remaining games (two 3-0 and two 3-1).

Evans was the group runner-up with four wins (three were 3-0 and one was 3-2 vs Broner). Key came third and got the bronze medal with three confident straight game wins.

There was a three-way countback for the remaining three positions, with three players on one win each and Sivathanu emerged on top, ahead of Broner and then Alex MacDonell (Sy).

The next cadet/junior two stars in Sussex will be on Sunday 1st July and Sunday 8th July, both at Slinfold Primary School and Collyers College respectively. Click here to download entry forms.