Brotherhood D came out on top in the big relegation battle against Windsor Kestrels in Division One of the Clacton & District League, taking all four matches which went the distance to win 7-3. 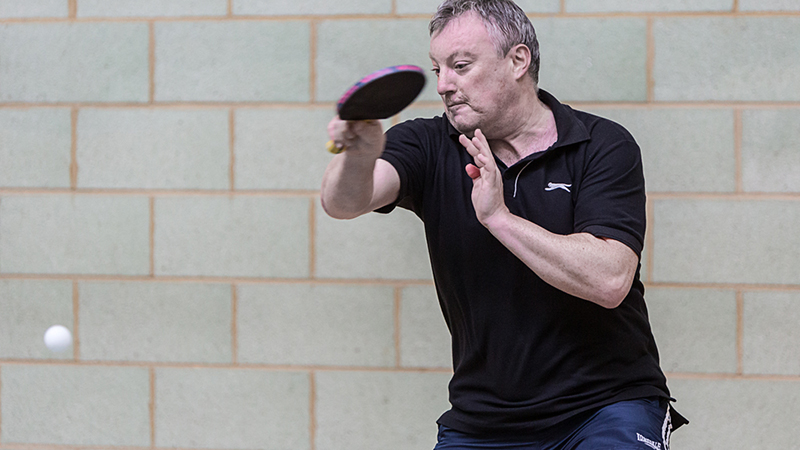 Brotherhood D came out on top in the big relegation battle against Windsor Kestrels in Division One of the Clacton & District League, taking all four matches which went the distance to win 7-3.

In a hard-fought encounter, Grant Sharpe emerged as Brotherhood’s hat-trick hero, defeating Jonathan Found 11-6 in the fifth, John Harvey 11-9 in the fifth and Dave Martin 13-11 in the fifth. Lee Harvey and Scott Campbell both won twice for Brotherhood, Campbell enjoying an 11-8 in the decider victory over John Harvey.

The win means Brotherhood D, who before the match were two points behind the Kestrels, are now two points ahead of them, leaving their relegation rivals rooted at the bottom.

Elsewhere, Brotherhood C took advantage of the absence of Sam Hume and James Denyer from the Nomads Panthers’ line-up to hold the champions to a draw. Kevin Gowlett recorded a hat-trick for Brotherhood whilst Abi Peshkar’s couple included an 11-8 in the fifth win over Colin Webber. Gill Locke won twice for the Panthers, and John Hatley and Webber once each, although it was an uncomfortably tight 3-2 (7-11, 10-12, 11-7, 11-8, 11-6) for Webber against Kevin Pryor.

Three for Gary Young, and two each from Kevin James and Gavin Price, saw Walton A to a 7-3 success against club-mates Walton C. Peter Burrows won twice for the losers and, with Graham Buxton, defeated James and Price to take the doubles for the ‘C’ team.

Walton B won all four matches which went the distance to defeat Nomads Lions 8-2. David Binns, making his first appearance of the season, stayed unbeaten, although it was a narrow 11-7 in the fifth against Arran Hutchinson. Derek Willis’s hat-trick also included an 11-9 in the decider win over the same player.

John Colvin was Lawford’s unlikely maximum man in Division Two as his side edged out Brotherhood H 7-3. But it was a close-run thing, Colvin beating Woody Fitzpatrick 11-9 in the fifth and Frank Burbidge 11-6 in the fifth, and Ian Sherwood scraping past Tricia Salter 11-9 in the fifth. For once, Paul Hewitt failed to remain unbeaten, taking a couple but unable to get the better of Burbidge. Burbidge won two for Brotherhood and Fitzpatrick one.

Trebles for Graham Parkes and Paul Alden were the basis of Brotherhood I’s 8-2 success over Nomads Jaguars. The pair also shared a doubles win in the only individual encounter which went the distance, beating Mike Wellum and Kevin Hume 11-9 in the fifth. Wellum and Hume won a point apiece for the Jaguars.

It was also 8-2 for Walton E against Walton D, Jared Chelski and Daniel Young unbeaten and Jane Young winning one. John Bonner and John Long were the ‘D’ team’s points-scorers.

Second-placed Windsor Penguins were given a sterner test by Brotherhood J but two each from Debra Found, Alan Charman and Paul Dale saw them home 7-3. Dan Still won a couple for the losers, beating Charman 11-9 in the fifth but going down 11-7 in the fifth to an ebullient Found. Brotherhood’s Maci Harvey played well, recording an unexpected 11-5 in the decider victory over Found and only just losing out 11-8 in the decider to Dale.

Nomads Leopards won 6-4 against a Windsor Swallows’ side forced to field a guest player. But there was consolation for the losers, with Robbie Strutt again staying unbeaten and, for the first time this season, the Swallows winning a doubles, Strutt and Mark Lamb beating Stuart Wilkinson and Dave Wright 11-5 in the fifth. And the Swallows very nearly snatched the match victory, Wilkinson just defeating Lamb 11-9 in the fifth and Norman Jacobs narrowly beating the same player 11-7 in the fifth.

The all-Nomads clash between the Lynx and the Ocelots saw a predictable 9-1 victory for the Lynx. Liam Harris and Dave Harris won three each and Cameron Cini two. Dominic Joannou picked up the Ocelots’ point whilst Barbara Rogers was unlucky not to add another, taking Dave Harris all the way before losing 11-7 in the decider.

* The Handicapped Singles Tournament takes place this Saturday (3rd February) at Windsor’s St James Hall with play starting at 10am.