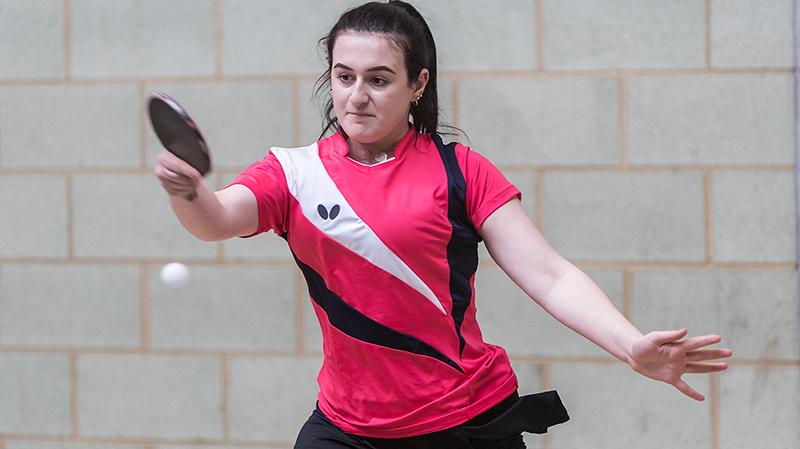 And when Gracie won the Ladies’ Singles crown she created a remarkable piece of local table tennis history, achieving the extraordinary feat of simultaneously holding the Ladies’ Singles titles of four local Leagues – Clacton, Colchester, Chelmsford and Ipswich. It’s an unprecedented achievement for a player still only 16 years of age and one which may not be repeated for a long time, if ever.

The Clacton final saw Gracie pitted against Annabelle Rodriguez, her opponent in the last four Ladies’ finals, and the result was the same, this year seeing Gracie win 3-0 (11-8, 11-7, 11-6) without ever having to be at her ruthless best.

It was her fourth Ladies’ Singles title in as many years and crowned a marvellous season for Clacton’s home-grown heroine, moving her to sixth in the League’s all-time list behind Sheila Howe, Isabel Barton, Jenny Binns, Marion Denton and Gill Locke.

As expected, the top-four seeded players made it to the semi-finals although it was Annabelle who reached the final ahead of No 2 seed Sue Welham, courtesy of a 3-0 (11-8, 11-8, 12-10) semi-final success.

In the Ladies’ Doubles the unique grand-daughter/grand-mother combination of Gracie Edwards and Cris Edwards reprised their success of two years ago, defeating Sandie Krelle and Sue Welham in the final. But the 3-2 (5-11, 11-7, 8-11, 11-2, 15-13) reflects the fact that it was a far from easy task, the match swaying first one way and then the other.

Credit goes to the brave determination of Krelle and Welham who had a match point at 10-9 in the fifth but then had to save four match points before finally succumbing agonisingly-close 15-13. It was a third final defeat for the Krelle-Welham combination, the pairing having lost in both 2012 and 2013.

For the record, it was a second Ladies’ Doubles title for Gracie and a sixth for Cris.

Gracie’s third trophy came in the Mixed Doubles where, with Andy Warner, they retained their title in a repeat of last year’s final against three-times winners Colin Stallwood and Annabelle Rodriguez. But whereas last year’s match was settled 11-7 in the fifth, this time it was a more comfortable ride for the champions, winning 3-0 (11-6, 11-8, 11-9) in a contest that never hit last season’s heights.

With Stallwood nursing a foot injury, it was always going to be an uphill struggle for the eventual losers – and they so nearly didn’t make it to the final, the three-times champions just scraping past Gary Young and Jane Young 11-7 in the fifth in their quarter-final clash.

A special mention goes to surprise semi-finalists Jared Chelski and Maggie Earle with their 3-0 (13-11, 11-5, 11-8) quarter-final win over John Barton and Isabel Barton before, predictably, succumbing to the eventual champions.

For good measure, Gracie added a fourth title to her weekend portfolio when, with Sam Hume, she took the Junior Doubles. The event went strictly to form where Hume and Edwards were hot favourites. In the final, they beat Scott Campbell and Ethan Lloyd 3-0 (11-6, 12-10, 11-6) although not without a harder fight than they might have expected, Campbell and Lloyd in no way overawed by their more exalted opponents.

It was a first Junior Doubles success for Edwards but a fourth for Hume who’s now won his four titles with four different partners.

If four was the lucky number for Gracie, then it was three for Andy Warner who took a hat-trick of titles. But although his Mixed Doubles success was a straightforward affair, he can probably have fought no harder, expended more energy, liberated more sweat or exhausted more nervous energy in his whole table tennis career than in taking the other two titles.

In the Men’s Singles final Warner endured and eventually enjoyed a titanic struggle with 21-year-old James Denyer, the talented pair serving up a classic contest which most court-side spectators considered to be the best Men’s final in living memory, as the 3-2 (11-4, 11-9, 5-11, 10-12, 15-13) scoreline might suggest.

The volubly-active Warner took the first two sets with ease before Denyer staged a remarkable come-back which saw both players showing outstanding skill, looping and power-hitting at angles away from the table but showing deft and delicate shots of variety close to the net, all of which produced many breath-taking rallies.

Denyer was forced to save a match point at 10-9 down in the fourth before taking it to a dramatic fifth where the tension grew by the minute. Denyer again saved three match points when he was 10-7 down – but then held two match points at 11-10 and 12-11 to take the title. But it was Warner who closed it out at 15-13 in the fifth in a final which neither player deserved to lose.

With reigning champion Colin Stallwood struggling with injury, the top half of the draw opened up for Warner, and he was able to dispose of Greg Green in three-straight, and both Gary Young and Kevin Gowlett in four sets. Gowlett had reached the semi-final by beating Stallwood 12-10 in the fifth in their quarter-final match, having lost to him in the Veterans Singles earlier in the Tournament.

In the bottom half, Denyer defeated Gavin Price in three-straight before surviving a monumental 3-2 (5-11, 11-5, 14-16, 11-9, 11-8) struggle with Paul Hume in the quarters and then defeating Paul’s younger brother and No 2 seed, Sam Hume, in three-straight in the semis.

All eight top seeds made it to the quarter-finals and the only minor surprise in the early stages was Mel Rampton topping his group at the expense of Kevin James. But perhaps there was an eye to the future in the groups where 13-year-old Liam Harris took a set off Denyer, as did 12-year-old Ollie Rampton against Warner.

The Men’s Doubles was an equally tense affair where Greg Green and Colin Stallwood were attempting to repeat their successes of 2014, 2015 and 2016.

Andy Warner and Gary Young stood in their way but, with Green and Stallwood 11-7, 11-7 up, the picture surely looked rosy for the former champions. But the third set proved to be a nerve-wracking marathon, with Green and Stallwood surrendering a hatful of match points before eventually losing it 19-17. And, despite being 8-5 up in the fourth, they conceded two more match points before going down 13-11 to take the match to five. And it looked all over for Green and Stallwood when they were 7-3 down in the fifth but they levelled to 9-9 – only to see Warner and Young clinically take their first and only match point to win 7-11, 7-11, 19-17, 13-11, 11-9.

But through all the tension, there was top-class doubles play from all four players, with the 19-17 third set likely to last long in the memory of players and spectators alike.

Once again, the top eight seeded pairs made it to the quarters and whilst Warner and Young will reflect the luck was with them in the final match, they may also wish to remind themselves that good fortune was with them all through the event. They were pushed hard by the unfancied pair of Kevin James and Paul Woolnough in Round Two, winning 3-2 (11-9,7-11, 9-11, 11-7, 11-6), and then scraping home by an even tighter 15-13, 11-8, 2-11, 9-11, 13-11 in the semi-finals against reigning champions Paul Hume and Sam Hume.

Having lost in the semi-finals of both the Men’s Singles and Men’s Doubles, there was minor consolation for Sam Hume in the Junior Singles which he took 3-0 (15-13, 11-1, 11-6) in a repeat of last year’s final against Daniel Young. As the scoreline suggests, the first set was dramatic, with Young at one point leading 10-7. But, having dragged himself back to take the first set, the more experienced Hume took control to notch up his fourth Junior Singles title in as many years, this in his last year as a Junior.

But Young had played out of his skin on the way to the final, none more so than in the semi-final where he’d confounded the pundits to power to a shock but deserved 3-1 (11-4, 11-9, 8-11, 11-5) victory over Gracie Edwards, the only blot on her marvellous tournament.

The Veterans’ Singles went to form with the top four seeds reaching the semi-finals, and the top two reaching the final. The final proved to be another triumph for Gary Young who, taking his second title of the Championships, retained the crown he’d surprisingly won in 2017. Last year, he’d beaten Colin Stallwood in the semi-finals, this year he beat the same player in the final. And despite a brave performance from the clearly-hampered Stallwood, Young took a see-saw match 3-2 (9-11, 11-6, 11-2, 8-11, 11-4).

It was a deserved victory for Young who’d come through three tough matches to reach the final, eliminating Colin Dearman, Kevin James and Gary Cattermole.

The final of the Super-Veterans’ Singles was between Gavin Price and Phil Smith, two players who’d never reached this stage before. Price, seeded third-equal, had a good semi-final win over No 2 seed Kevin James whilst Smith defied the seeding committee to come through by eliminating Colin Webber and top seed Derek Willis. But he was unable to reproduce the good form of his earlier rounds, Price taking the final by a comfortable 3-0 (11-4, 11-4, 11-7).

A special mention should be made of the Round One encounter between John Long, the three times a holder of this title and the first-ever winner in 1999, and John Rankin. The two oldest Super-Veterans on show fought out a typically gritty match to the end, Rankin eventually edging it 3-2 (8-11, 10-12, 11-6, 11-5, 11-8), his success perhaps explained by the fact that he is Long’s junior by two years.

Despite there being no seeds in the Restricted Singles it was the two top players, Kevin James and Oli Reynolds, who eventually met in the final. And Reynolds it was who, having been last season’s runner-up, made no mistake in winning 3-1 (11-5, 11-5, 8-11, 11-7) with something to spare, despite a slight third-set wobble. It was the seventh time in the 28-year history of this event that a losing finalist has bounced back to take the title the following year.

Paul Woolnough and the less fancied Barry Allen reached the semi-finals, Barry beating son Lee 11-7 in the fifth in the process.

The Divisional Singles produced two of the youngest-ever winners with a combined age of just 25 years.

The Division Two Singles was contested by 12-year-old Ollie Rampton and 13-year-old Daniel Young, who also happened to be the top two seeds. The two had met earlier in a Junior Singles Group, where Young had come out on top 11-9 in the decider. But this time it was Rampton who took the honours, dominating the final and winning 3-0 (11-8, 11-4, 11-8) against top-seeded Young who will feel disappointed not to have come closer.

Most of the early rounds went to form with only Lee Allen’s win over Mark Ratcliffe to reach the semi-final counting as anything of a surprise.

However the Division Three Singles threw up a surprise with Debra Found beating No 2 seed Paul Metcalf 11-5 in the fifth in the semi-final. But in the final she met top seeded Liam Harris and the 13-year-old, displaying his trademark enthusiasm and aggression, showed no mercy and won in a comfortable 3-0 (11-7, 11-2, 11-7).

Once again the League is indebted to Paul Newbould Planning and Building Design Services, the main sponsors of the Championships for a magnificent 25th year. And thanks also go to The Skelmersdale Centre Ltd (Angela Barratt), Red Driving School (Felipe Rodriguez), Young’s Toys, Hobbies and Collectables (Gary Young) and to Jenny Higgins for their sponsorship of individual events.