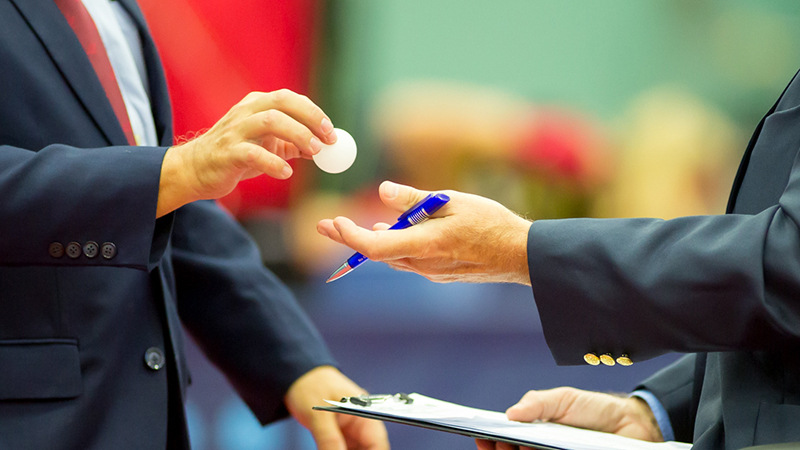 Thirteen-year old Harris got out of the traps like greyhound, wrapping up the first two sets with a display of uninhibited attacking. But Barton, using his vast experience, adapted his play, mixing pushing, looping and lobbing with some excellent returning and the intermittent offensive shot, to take the third 11-6.

Barton looked to have the fourth set sewn up at 9-4 but Harris, a determined terrier as well as a table tennis talent, fought back to level at 9-9. Barton fluked a net-winner to go ahead 10-9 but Harris responded with the next two points – and only a brave Barton forehand saved the title point. From 11-11, the tie see-sawed to 13-13 when Harris hit his next shot into the net, only to see his opponent then take the set 15-13 courtesy of an outrageous edge.

So the match was set up for a fifth set shoot-out which proved as riveting as the previous four sets, with both players entertaining the spectators with a series of quality rallies. The outcome was always in doubt, Barton having to grit his teeth to come back from 8-5 down to take the set – and the title – 11-9, winning the final point after a rally of the highest-class.

It was a well-deserved reward for the long-serving Barton, a League player for over forty years and currently the League’s Treasurer, who’d only once previously reached a Handicap Singles final. That was back in 2003 when Kevin Hogg defeated him by the narrowest of 21-18, 15-21, 21-19 margins. But this time Barton took the honours, becoming the 30th different player to take the Gordon Denton Trophy in its 37-year history.

Although the result was heartbreak for young Liam, who was a beaten semi-finalist last season, his time will surely come, and many winners’ cups and medals will adorn his trophy cabinet in the future.

The tournament produced several hard-fought encounters and it meant an exhausting day’s table tennis, not just for the finalists but for many other players, none more so than Windsor stalwart, John Hobson who, despite his lack of mobility through injury, played out of his skin all day. But his semi-final against the eventual winner proved a match too far, Barton (-1) defeating a visibly-tiring Hobson (+1) 3-1 (8-11, 11-9, 11-6, 11-9). This match was a repeat of their earlier match in the group stage where the two had been involved in a wonderful marathon encounter, Hobson edging it by the narrowest of 3-2 (20-22, 13-11, 7-11, 13-11, 12-10) margins to inflict defeat on Barton for the one and only time in the tournament.

Runner-up Harris was also involved a number of hard-fought matches during the day, five of his seven matches ending deep into the fifth set. None was closer, or more exciting, than his semi-final clash with another 13-year old, Ollie Rampton. It turned out to be a minor classic, both the teenage sensations going hammer and tongs, shot for shot, and neither leaving anything in the locker. Harris (+1) finally won 3-2 (8-11, 11-4, 9-11, 11-5, 11-8) against Rampton (-3), the tournament runner-up last year.

Indeed, of the 55 matches played by the 28 competitors during the course of the Tournament, one third went all the way to a fifth set, a testament to the competitiveness of the event.

And, as if to illustrate the unpredictability of the Tournament, Phil Smith, Paul Metcalf, Adam Wilkin, John Hobson, Paul Hume, Scott Campbell and Dominic Joannou all topped their Groups but only one – Hobson – made it to the semi-finals, the other three semi-finalists all having qualified as Group runners-up.

* In the League, Nomads Panthers took a giant step in their quest to retain their Division One title with a convincing 8-2 victory over one of their nearest rivals, Windsor Condors. James Denyer and Paul Hume were undefeated for the Panthers, Denyer fending off the challenge of Ollie Rampton 11-7 in the decider. Gill Locke picked up a single point but it was an important 12-10 in the fifth victory over Mel Rampton, the same score by which she lost to Greg Green.

Although the Panthers are opening up clear water at the top, the battle behind them is hotting up, with both Walton A and Brotherhood C challenging the Condors for the runners-up spot.

This week Walton A were 8-2 winners against Nomads Tigers and are now just two points adrift of second-placed Condors. Walton were fortunate to take four of the individual encounters which went to a decider, Kevin James involved in two of them. Both James and Gavin Price stayed unbeaten

Brotherhood C are just a point further behind in fourth place, this after a 7-3 victory against Windsor Hawks. Alan Burgess and Kevin Gowlett took trebles and Kevin Pryor one. Felipe Rodriguez and John Barton got a point each for the Hawks, and shared an 11-9 in the fifth doubles success over Gowlett and Pryor.

Nomads Lions beat a weakened Windsor Eagles 8-2, an exact reverse of their early-season encounter. Adam Cuthbert stayed undefeated for the Lions, with the two Lloyds, Jason and Ethan, picking up a pair apiece. Phil Smith took the two Windsor points.

Brotherhood D could only field two players against Lawford who, having been gifted three points, went on to notch up their first win of the season. Richard Spence won two but Charlie Denholm got the crucial point, beating Scott Campbell 12-10 in the decider to clinch the 6-4 victory.

In Division Two leaders Brotherhood I beat Brotherhood F 8-2, Paul Alden unbeaten, and John Owen and Fred Gallone taking two each. Owen suffered only his second defeat of the season, this at the hands of Lee Allen, the same player who’d beaten him earlier in the season, although this time it was a mighty-tight 13-11 in the fifth.

In-form Woody Fitzpatrick starred for Brotherhood H with yet another hat-trick in his side’s 8-2 success against Nomads Bobcats. It was fifth maximum in consecutive matches, although both Liam Harris and Andy Cawley took him close in five. Tricia Salter and Mark Salter added two each for the winners, as did Harris for the losers.

Windsor Buzzards will unfortunate to have encountered Walton E’s top three players who predictably closed out the match 10-0. There were hat-tricks here for Walton’s Gary Stallwood, Mark Ratcliffe and Mark Gale.

In an all-Windsor clash, the Magpies and Harriers drew for a second time this season. An unbeaten Dave Martin was the difference between the two teams, although the doubles ultimately proved crucial, Martin and John Plummer scraping past Isabel Barton and Jenny Higgins 11-9 in the decider. Barton picked up a couple for the Harriers.

The two teams at the foot of the table, Brotherhood G and Nomads Jaguars, battled out a hard-fought draw, sharing the four matches which went to a decider. But Nomads’ Andy North was the man of the match, recording his first treble for two years. Paul Metcalf and Mark Beckham won a couple each for Brotherhood.

Two each from Alan Charman, Jackie Bunce and Sue Chillingworth saw Windsor Penguins to a 7-3 victory over Windsor Falcons although none of them could get the better of Kayley Rodriguez who was undefeated for the Falcons.

The event takes place on Saturday 16th February at St Osyth Village Hall, 7pm for 7.30pm start. Tickets are £3 each with free entry for children. Bring your own drink and nibbles.