Clacton & Dist: Treble No 3 for Gowlett

Year in, year out, Kevin Gowlett is one of the most reliable and consistent players in Division One of the Clacton & District League, and this week the ever-present Brotherhood A player guided his team to a second 7-3 success of the season over Nomads Lions. 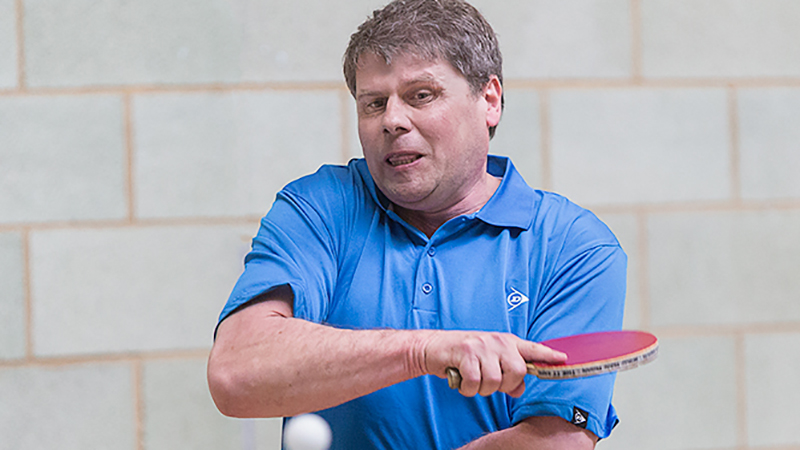 Year in, year out, Kevin Gowlett is one of the most reliable and consistent players in Division One of the Clacton & District League, and this week the ever-present Brotherhood A player guided his team to a second 7-3 success of the season over Nomads Lions.

Two for Alan Burgess, one for Luke Burridge and a Gowlett-Burgess doubles win completed the Brotherhood scoring. For the Lions, Cuthbert won two, with skipper Jason Lloyd contributing a 3-0 (11-2, 11-3, 11-5) victory over Luke Burridge.

Elsewhere, John Hatley, Sam Hume and Liam Harris all stayed undefeated as leaders Nomads Panthers inflicted a 10-0 defeat on Walton C, only two of the matches requiring a fourth set.

Walton A’s Gavin Price had a struggle before beating Andy Vincent 11-7 in the fifth but, with eight of the individual matches being settled in three-straight, it was otherwise plain sailing for Walton to record a 10-0 victory over Windsor Hawks to regain second spot in the table. Gary Young, Daniel Young and Price all remained unbeaten.

Windsor Eagles beat Walton D 9-1, a repeat of their early-season score. Mel Rampton, Phil Smith and Gary Cattermole, making a rare but welcome appearance for the Eagles, all recorded trebles. Three tight matches which the Eagles won might easily have gone the other way, Cattermole beating Jason Gale 11-8 in the fifth and Mark Gale 11-7 in the fifth, while it was also 11-7 in the fifth for Smith against Jason Gale.

Walton’s only point was a surprise 11-5, 11-7, 11-8 doubles win for the two Gales against Rampton and Cattermole – it was only a second doubles win of the season for Walton and only the second time the Eagles had suffered a doubles defeat.

Windsor Buzzards and Brotherhood D shared the spoils for a second time this season in a match where every player picked up at least one point. Dave Martin was unbeaten for the Buzzards although it was a tight 11-9 in the decider against Paul Metcalf, the same score by which his team-mate Pete Bloomfield defeated John Gallagher.

Brotherhood’s Mark Beckham won two, and Gallagher and Metcalf one each. But it was the doubles which eventually proved crucial, Gallagher and Beckham defeating Bloomfield and Andy Cawley 11-8 in the decider.

Every player also picked up a point in the Windsor Harriers v Lawford match but Lawford emerged worthy 7-3 victors. Charlie Denholm picked up his first maximum of the season whilst there were two for Ian Sherwood, one for Richard Spence, and Denholm and Sherwood sharing a doubles success.

And every player also picked up a point as Brotherhood E and Windsor Kestrels fought out a draw for a second time this season – although no-one managed to stay unbeaten. In a highly-competitive match, Duncan Dunne and Rodney Betts won two each for Brotherhood, Dunne playing well to beat Graham Bunce in four sets, needing an 11-7 in the fifth win to defeat Jackie Bunce but surprisingly going down to Debra Found, whilst Betts beat Found and then Jackie Bunce 13-11 in the decider. Tony Edmonds won one, losing to the two Bunces but edging out Found 11-9 in the fifth.

In Division Three Windsor Penguins were 7-3 winners against Windsor Magpies, Peter Aumord and Kayley Rodriguez each recording trebles. There was one each for Alan Rutledge and John Plummer of the Magpies, as there was for Dave Sweetland who came close to adding to that tally, narrowly losing 11-7 in the fifth to both Aumord and Rodriguez.

The win for the Penguins moves them back to the top of the table, leap-frogging Walton E who went down 6-4 to Brotherhood F, a reverse of their early season score. Brotherhood’s young guns, Ben Bryden and Alex Marsh, each recorded trebles.

For Walton, Toni Hayhow-Khan with a win in five over Andre Pavlov, Tony Sharman and Lynette Sparks each took one and, in the closest match of the evening, Sharman and Hayhow-Khan edged the doubles 12-10 in the fifth against Bryden and Pavlov.

Nomads Leopards were 6-4 winners against a two-player Windsor Robins. Windsor’s Neil Chegwidden kept up his good record with a hat-trick and shared a doubles win with Mick Coker against Stuart Wilkinson and Bob Jillins.

The Lynx were in action for a second time and, despite a Joannou hat-trick and Norman Jacobs’ 11-5 in the fifth win over Christophe Wilmotte, the Lynx went down again, this time 6-4 to Nomads Ocelots. Arthur Wells-Garrett and Hazel Blanche each took two for the winners, and shared a doubles victory, while Wilmotte had a crucial 3-2 (15-17, 6-11, 13-11, 11-8, 11-9) win against Adrian Sexton.

* The closing date for entry to the Handicapped Singles is Sunday 6th February. Entries should be sent by e-mail to Peter White or by post to Tony Oswick. The Tournament takes place on Sunday 13th February at the Coastal Academy Sports Hall, with play starting at 10am. Fuller details can be found on the League’s website.