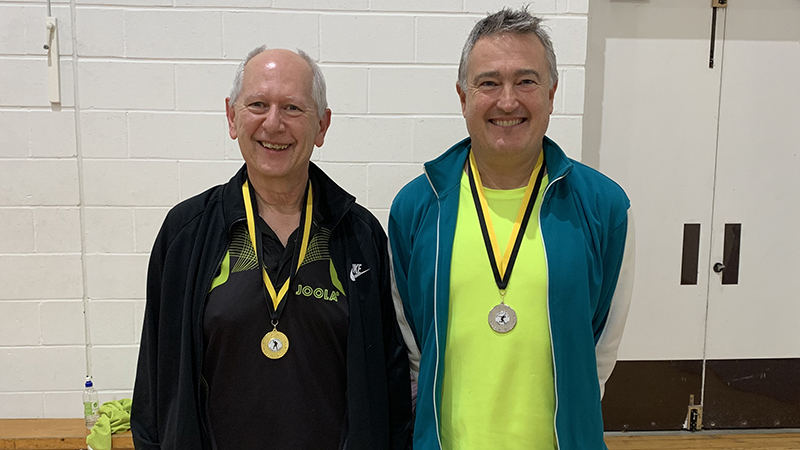 There was one large round-robin group of 10 players for the seniors. 13 players entered the vets, which was not enough for a conventional ratings tournament, with two bands of eight players. Therefore we had to be creative with the format, in order for all players to get seven or eight matches. See the veterans report for more details.

There were initially three groups of four or five players. Then the top two from each group progressed into a Band 1 of six players and the remaining players went into a Band 2 of seven players. In Bands 1 and 2, players did not play against players against whom they had already played in the initial groups.

In Group 1, unranked Paul Rowley came second to Scott, with three 3-0 wins. It is worthy of mention that Tony Power (Sx) just lost 13-11 in the fifth to Colin Barham (E) in this group. Second seed, Lowe, won Group 2, just losing one game to unranked Jeremy Kempton (Sx), who was the runner-up.

So there ended up being three unranked good standard players in the Band 1, who would otherwise have been in Band 2 in the standard ratings tournament format. No matches went to five games in Band 1. There was only one case of an unranked player beating a seeded player, which was when Jeremy upset older brother Simon in straight games. As mentioned earlier, Scott won all of his matches to win the band.

Both Simon and Bob won three matches each and the silver medal was awarded to Kempton on the basis that he won their head to head (in four games). Jeremy and Paul both won twice and Rowley finished in fourth place as he had defeated Kempton (in four). Cretu brought up the rear in sixth place.

Scott won all nine of his matches as mentioned above, beating runner-up, Lee McHugh, seeded second in straight games 11-8, 12-10, 11-8. McHugh won his remaining eight matches, conceding five games in total, but not being taken to five. Abdur-Rahman Kelani (K) finished in third place, but only won one match 3-0 and just scraped over the line vs Jozef Krakovsky (Sx) 12-10 in the decider.

As many as four players won four matches each, hence a count-back took place. The number of group points were taken into account first. Two group points are awarded for a win, one group point for a loss and zero group points for a concession. Cretu had left early and conceded two matches and hence ended up with two group points less than the other three, leaving just three players in the count-back.

Next, wins in matches between the three remaining players were considered and they all won one each. Next, for and against games ratio was considered, but since all three matches in the trio went to the fifth game, it became a points count-back between the three players. Krakovsky defeated Mina Matta (Sx), Matta overcame Digby and Digby prevailed over Krakovsky. After considering the points for and against ratio, the following finishing positions emerged: fourth Krakovsky, fifth Digby and sixth Matta.

Peter Cracknell (Sx) won thrice and finished in seventh place, while Stanners won twice and finished eighth with the same number of group points as Cretu, but since Cretu had given Stanners a walkover, Cretu finished below him in ninth place. Digby was involved in an impressive quintet of five-game matches, winning three of them: 11-9 in the fifth vs Stanners, and 12-10 in the fifth vs both Krakovsky and Barham. He lost 12-10 in the fifth to Cracknell and 11-9 in the fifth to Matta. He must have been tired with all of those five setters and having played 17 matches on the day!

Other five setters included Cracknell defeating Barham 11-8, Krakovsky overcoming Stanners 12-10, Matta getting the better of Cracknell 11-3. A massive seven matches in the group were decided by just the minimum two points.