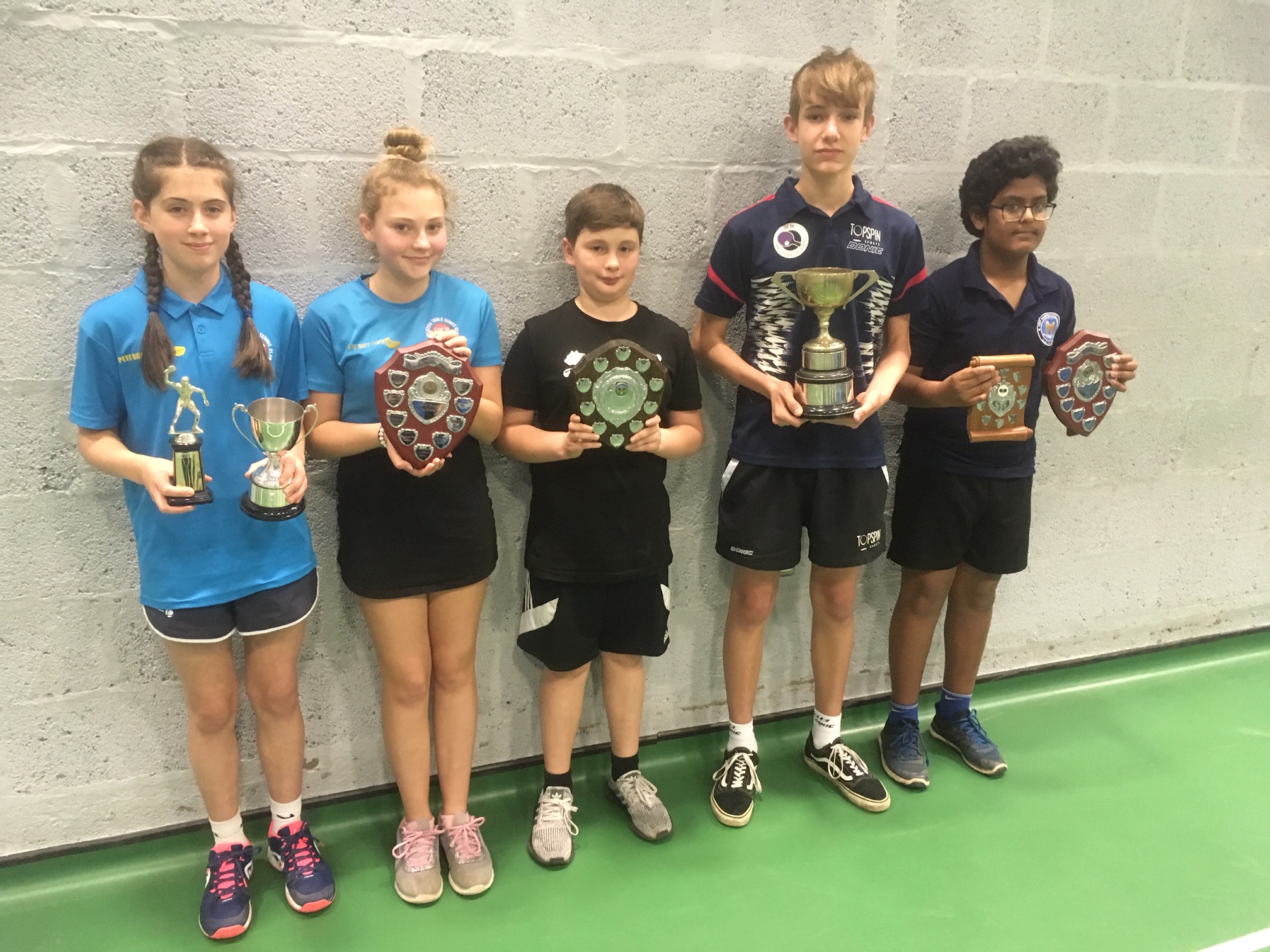 The Novice Singles drew a record entry of 26 competitors. Danny Norman reached the final for a second year running; however, he was unable to retain his title. His opponent Missaka Heenatigala played an intelligent game with variable spin and change of pace leading him to a comfortable win by 3-0 (11-8, 12-10, 12-10).

Anna Cole, Beth Pye and Rebecca Arrandale won their groups with no hiccups. Whilst Cole, Pye and Sophie Arrandale cruised through their quarter-finals, as her sister before her, Rebecca Arrandale had to fight hard to see off Emily Grove 3-2 (11-5, 16-14, 11-13, 2-11, 11-9).

The Cadet Boys’ Singles competition drew 23 competitors, so it was a fine achievement for both Joe Cull and Missaka Heenatagila to reach the final. In his second final of the day Heenatagila used a game plan of craft and guile to outfox his opponent 3-1 (11-4, 11-7, 8-11, 11-3).

The Novice Handicap final saw Noah Raven in his first ever table tennis competition face the more experienced Harvey Gough. Twenty-six players had started the event. With an advantage of +7 in each game Raven had to be in with a great chance. Gough, however, had other ideas and after a shaky first game kept his composure to win the title 3-0 (13-11, 11-9, 11-7).

The Junior Girls’ Singles final saw a rematch of the Cadet final earlier in the day when Beth Pye again faced Anna Cole. Whilst Pye had beaten Sophie Arrandale comprehensively in her semi-final, Cole had to show tremendous determination to fight back from 0-2 down against Abi Ingles to win 3-2 in her semi-final.

When Cole raced into a 1-0 lead with a change of tactics it seemed she maybe able to reverse the result of the Cadet final. This only seemed to galvanise Pye to greater heights who then went onto produce some blistering shots and secure her second title of the day 3-1 (6-11, 11-8, 11-9, 11-2).

The Junior Boys’ Singles final saw a repeat of last year’s Cadet Boys’ final with Alex Emms facing Luke Fisher. Both boys have been in great form this season and whilst Fisher was able to push his friend closer this year, the result was the same as Emms won 3-0 (11-8, 11-9, 11-9).

The Junior Drawn Doubles final provided some compensation for Anna Cole when she teamed up with Harvey Gough in her third final of the day. They had already produced a sensation beating Alex Emms and Beatrice Yates in a five-set thriller 16-14 in the last game of their first round match before defeating Beth Pye and Anna Blakely 3-1 in their quarter-final.

In the semi-final they took care of Abi Ingles and Matlida Neale 3-0. The final saw them face the formidable pairing of Johnny Blakely and Alfie Saunders. With Cole producing some devastating serves and Gough retaining his excellent form of the day they went secured a magnificent win 3-1 (11-8, 8-11, 11-6, 11-9).