The table tennis community will be saddened to learn of the death of Brian Rowlen, Chairman of the Clacton and District Table Tennis League, aged 74. Brian was involved in table tennis both locally and nationally for over six decades and it is no exaggeration to say that, for the last 40 years, he has been the mainstay of the Clacton League.

Brian began playing table tennis in 1952 and continued until 2002 when injury intervened to end his playing career. During that time he won a handful of trophies, most notably the Junior Boys Singles in 1956 and 1957, the Mens Doubles in 1959 and the Handicap Singles in 1998. But it is as a volunteer administrator and organiser that Brian made his mark. 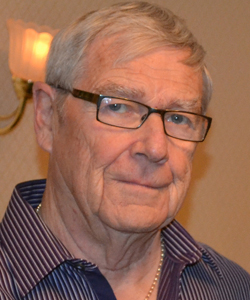 He joined the Management Committee of the Clacton League in 1956 and, apart from three years in the 1960s when he worked in the Midlands, he has been a  Committee member ever since.

From 1973 until 1984, Brian was the League’s Press and Records Secretary, building up a strong relationship with the local Press, meticulous in ensuring reports were sent in regularly.

In 1976, Brian had also been elected League Vice-Chairman and, on the retirement of Gordon Denton in 1984, Brian became League Chairman, a post he continued to hold until his death.

As Chairman, Brian took an active interest in all aspects of the League (which currently has over 160 players) and was a constant source of sensible advice and encouragement. He was closely involved in the work of the League’s three Sub-Committees (Tournament, Development and Cup) and, with his background as a bank manager, he was a wise head in all matters financial.

But Brian was far more than just a Chairman. For over 30 years, he was the Referee for the League’s three annual Tournaments. This included spending interminable hours scheduling matches beforehand which, for the Closed Championships – with twelve events spread over two full days – was a mammoth organisational task. Until recent years, Brian also compiled the League’s annual fixture list and assembled the League Handbook at the start of the season.

In recognition of his lifetime of service to the League, Brian was made a Vice-President in 2008. In the same year, Tendring District Council recognised Brian’s lifetime of work as a volunteer organiser when they awarded him a trophy for his ‘Outstanding Contribution to Sport in the Tendring District’. It speaks volumes that he was originally nominated for the category ‘Volunteer of the Year’ but the organisers felt it appropriate to create a brand-new award to recognise Brian’s very special commitment and long service.

As well as his League responsibilities, Brian was Secretary of the Brotherhood Table Tennis Club for 23 years. The Brotherhood, which currently has eleven out of the League’s 39 teams, is one of the three largest Clubs in the League. Brian ran the Club from start to finish, from organising the composition of teams at the beginning of the year to sorting out problems during the course of the playing season. And, rather than take a well-earned summer break, he even organised the Brotherhood Summer League as well.

Brian had also been involved in the Essex County Table Tennis Association (ECTTA) and, at one time, was its Chairman. He was one of only 32 Life Members of the ECTTA and, in 1986, he was presented with the Corti Woodcock Memorial Award by the ECTTA, presented annually in recognition of service to table tennis in Essex.

In 1988 and 1989, the National Top 12 Tournament (for the top twelve men and top twelve women players in the country) was held in Clacton. The 1988 Tournament was the first major sporting event held at the newly-built Clacton Leisure Centre and it was largely Brian’s reputation nationally that ensured Clacton hosted the event.

Throughout all this, Brian received the loyal support of his wife, Shirley.  For over 25 years Shirley was League Secretary and latterly she was the League’s Minutes Secretary. With both their son Paul and daughter Donna also playing in the League at one time, table tennis became something of a family affair. The thoughts and good wishes of us all go to Shirley, and to Paul, Donna, and their families, at this sad time.

Until his death, Brian continued to be as keen and enthusiastic about table tennis as ever. Without his unstinting effort and devoted dedication over a life-time, League table tennis would not have flourished in the Clacton area. Brian could rightly claim to be ‘Clacton’s Mr Table Tennis’ and he will continue to remembered with affection, respect and gratitude by all those associated with the Clacton and District Table Tennis League.

Brian’s funeral takes place at Weeley Crematorium on Thursday 27th March at 11am.