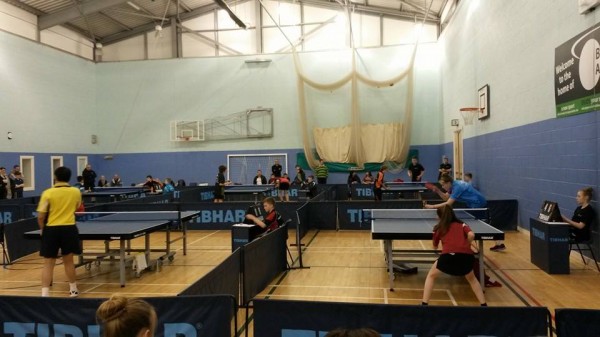 The top seeds had a successful day at the Bishop Auckland TTC two-star event.

In the under-11 boys, the top two seeds Josh Weatherby and Bishop Auckland’s Luca Pontone both won their groups and semi-finals to set up a final meeting, where Josh was too hot for Luca winning 3-0.  In the under-11 plate, Jack Slane won his second plate title, beating George Forster in a nail biting five-setter.

The under-13 boys’ top seed, Tom Macintosh from Worksop in Nottinghamshire, made his way to the final without dropping a set. He faced Will Dobson from Cleveland, who had knocked out second seed Fred Osenton-Brown in the semis. Although Will took the third end, he could not stop Tom winning 3-1.

The event saw Bishop Auckland’s Aaron Willoughby surpass all expectation to reach the final beating Joe Watts from Darlington in the quarter-finals followed by Leo Pontone in the semis. However, the fairytale ended there in a fantastic match, George Forster proving too strong with a 3-1 win.

Kaine Macdonald kept the trend of top seeds winning as he took both the cadet and junior titles. In the cadets he beat third seed Fred Osenton-Brown in the semi-finals and then second seed Tom Macintosh 3-1 in a cracking final. In the juniors, having knocked out home players Tom Whittaker and Zak Hutchinson to reach the final, he faced Daniel Moxon from Hull. Daniel was a late entry in place of a withdrawn player and made his way to the final with wins over Jack Jacomb and Chris Gregory. Kaine was not to be denied his second title and took home a 3-1 win.

The cadet plate was won by Thaaquib Saleem, beating the home club’s Jack Jacomb in a very tight five-set match in the final, while the junior plate was taken home by Elliot Booty, who was unlucky to be in the plate event, falling the wrong side of a countback group. In the final Elliot was too strong for Bishops Auckland’s Harry Atkinson, who did very well to reach the final beating older more experienced players to reach the final.

The girls’ events were also all about double and triple titles. Sophie Barlow took home a full set of titles, winning the under-13 by beating Jasmine Wong from Yorkshire in the final and beating her Swerve club-mate Holly Williams in both the junior and cadet finals.