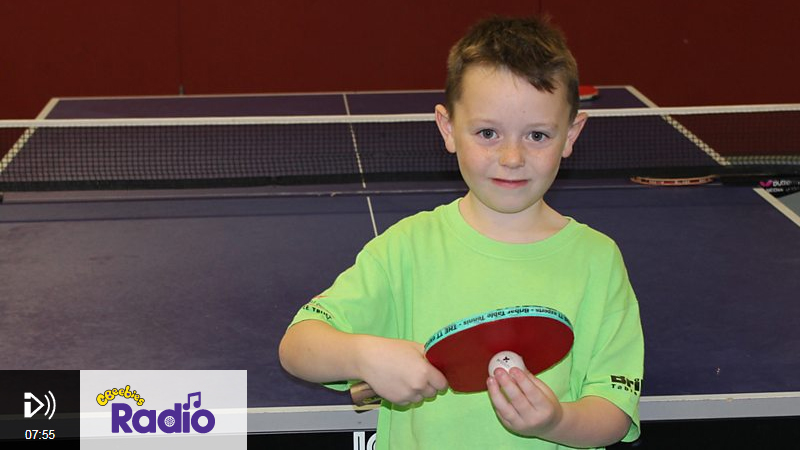 A young table tennis player from Plymouth has hosted his own national radio show.

Jamie, who trains at his local table tennis club every week, was given the chance to quiz his own sporting superstar, Paralympic GB table tennis player David Wetherill.

Jamie said: “My sporting superstar is David Wetherill because he has competed in lots of Olympic Games.”

During the show, Jamie also trained with Table Tennis England coach Paul Whiting and then accepted a tough challenge – to play against former Czech International Keta Myskova, who is also his mum.

Talking about his passion for playing the sport, Jamie said: “I started playing table tennis when I was two years old and I loved it.

“I’m currently in the top 30 players in England and I’m going to keep training hard so I can make it to being the best player in the country.

“I would love to be a sporting super star one day, but I’m going to have to keep practising.”

The podcast was recorded a few months ago at the Plymouth Centre for Excellence at Joola Plymouth Table Tennis Club. Jamie took part after being nominated by Table Tennis England.

Speaking about the experience, his dad, Kevin, said: “Jamie said he was quite nervous before doing it but the team at CBeebies Radio made it really easy and he really enjoyed interviewing Dave Wetherill who trains with the squads in Plymouth.

“We are all really proud of him and the podcast will hopefully inspire a few more younger children to find their local table tennis club and have a go.”

It’s not the first time Jamie has been in the news. He previously hit the headlines at just 18-months-old after a video of him playing ping pong with his dad, Kevin, went viral.

The video saw Jamie returning shot after shot as he sat on one side of a table tennis table. In just four days it had been watched over 680,000 times and was picked up by national news sites including: The Daily Mail, The Telegraph and BBC. It led to his nickname, the Ping Pong Baby.

The podcast is now available on the CBeebies Radio website and on the BBC iPlayer Radio app.