The ITTF Team World Cup brought the world’s best table tennis to London – and now you can experience it for yourself in 360 degrees. 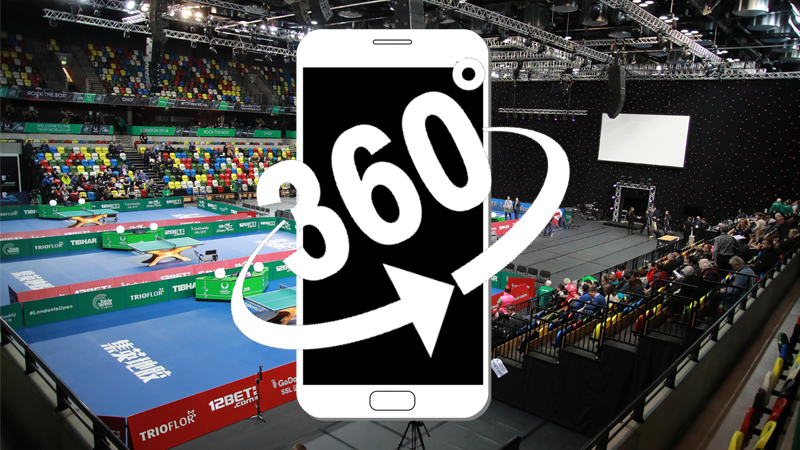 After the glory of the Team World Cup and the Commonwealth Games, the global challenges continue to come thick and fast for England – and next up is the World Team Championships.

England men won a memorable bronze medal at the last edition in Kuala Lumpur two years ago, a feat they repeated at the World Cup in London in February.

It was an amazing four days at the Copper Box Arena, with 12,500 spectators soaking up the atmosphere – and now you can get a unique, never before seen view of the biggest table tennis event to be hosted in England for many years.

Table Tennis England has released a virtual reality 360° video that offers a twist on the usual table tennis viewing experience.

The video lets fans navigate in and around the Copper Box – offering new angles and access – by simply dragging a mouse or finger across the screen – or turning around with a VR-enabled device.

The tour starts outside as spectators pour into the venue, and then heads inside to explore the arena from all angles.

We will then take you to areas that are often off-limits to the general public.

You’ll find yourself standing alongside cameramen in the very centre of the multi-court field of play – able to see the action all around you and experience the arena from an athlete’s perspective.

In the training hall, we offer you an insight into life behind the scenes of a major table tennis tournament.

Get up close and personal with Team England’s David McBeath and Liam Pitchford as they go through their practice drills, while teammates Paul Drinkhall and Sam Walker warm up in the background.

As you explore further you can catch Team China training, or see as Team Japan work their way through their warm-up routine.

“Not only were we able to bring the world’s best players to London, but we also provided a home crowd the chance to see Team England win a bronze medal on a world stage.

“By creating this immersive video we’ve been able to bring a bit of the Team World Cup experience to the world.”

The video was produced in conjunction with the Centre for Journalism at the University of Kent.

Callum Simpson, student at the university said: “The dedication and skill on show was incredible to see close up, and it was exciting to capture 360° video of the event and to think about the capabilities for future coverage of live sport!”

Fellow student, Joe Dawson, added: “My time at the Copper Box was fantastic, the atmosphere was something I’ve never experienced before. Working with Table Tennis England was a pleasure and working with the new 360 equipment opened up almost infinite possibilities for interactive filming!”

How to enjoy the 360° experience for yourself: