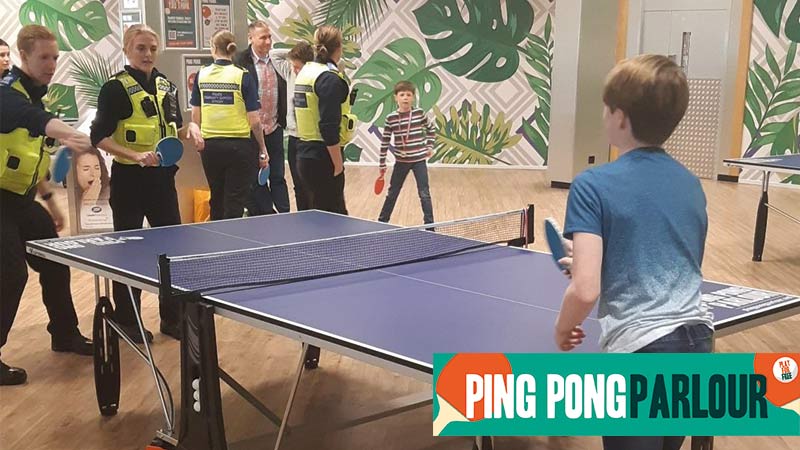 Police officers in Bishops Stortford have recently found themselves under fire from flying table tennis balls at the hands of local youths.

Happily, no arrests were made – it was all part of the fun at a ‘Pong with Police’ event held in the Ping Pong Parlour in Jackson Square shopping centre.

Children were invited to take on the police’s Safer Neighbourhood Team in a friendly tournament, with trophies donated by a local retailer, Alan from Timpsons.

The opportunity to show off some ping pong prowess was just too tempting with a great turnout on the day, including teenagers, young children and their parents pitting their skills against the officers, including PCSO Natasha Coppin.

It was all part of a campaign to forge links between the police and the local community, PCSO Coppin explained:

The purpose of the event was to build a relationship between the police and the community. I wanted to bridge the gap between the young people of Bishops Stortford and the police, and show them that it’s not just a uniform. We are approachable, and showing a more fun and relaxed side, allows the kids to see this.

The response on the day was great. We had a fantastic turnout and the whole event was a joy to be part of. Normally if we were to get a call about a group of youths with bats in their hands, it’d be something we’d be worried about, however on this occasion, it’s something we encouraged.

Since the event I have had children that attended happily coming up to me and saying ‘hello’, something that they may not have done before. I have also been asked by a number of people when the next event is. I’m currently in the process of organising the next one, which I’m sure will be just as successful as the last

The ‘Pong with Police’ session is just one of a series of community events currently running at the thirty Ping Pong Parlours all around the country.  Others include Bat and Chat sessions held at several Parlours which connect older people together and help combat social isolation; ‘Wider World Project’, a programme designed for people with special educational needs in the Prince Bishops Shopping Centre, Durham and a PRU (Pupil Referral Unit) session in Runcorn, giving school children the opportunity to play table tennis.

As well as connecting communities, research suggests that the Parlours are encouraging people to take up the sport on a more regular basis with 10% going on to play at another venue.