‘Paving the way for women in ping pong’

Tennis England and Ping Pong Fight Club are ‘paving the way for women in ping pong’ with their new partnership aimed at increasing the number of women participating in the sport. 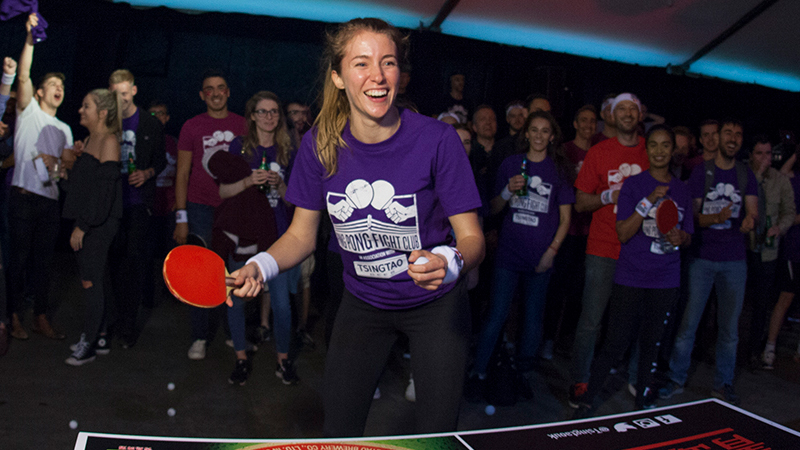 Table Tennis England and Ping Pong Fight Club are ‘paving the way for women in ping pong’ with their new partnership.

The two companies joined forces to promote female participation in the sport, by supporting and encouraging all-women teams to take up table tennis in the workplace and compete on behalf of their companies across the country.

The first team to benefit from this partnership were from Funding Circle who played at Ping Pong Fight Club last week. They were the first all-ladies team to enter the London event.

They did their company proud and in fact Phillipa Paxman became the first female player to get to the quarter finals of the Chancers Championships amidst wild scenes of celebrations from her team mates, work colleagues and in fact many of the supporters in the crowd.

The experience has helped inspire the team to build an all female social ping pong network within Funding Circle, hopefully leading more tournament participation and group coaching sessions in the future.

Sneh Brahmbhatt, from the all women’s team, added:

I don’t know any other tournament that are as encouraging, supportive, and proud to have women competing as the Ping Pong Fight Club Tournament are.

They are paving the way for women in ping pong.

Together, Ping Pong Fight Club and Table Tennis England will continue this venture around the country, with Manchester being the next target to get more women playing.

Engaging more women and girls is one of our sport’s priorities and we are working hard with a range of partners to ensure more opportunities are available to them.

The London tournament proved that events like Fight Club are perfect platforms for encouraging more females to gain the confidence to pick up a bat and play.

We’re delighted to hear that since being coached and competing, Funding Circle have set up their own female ping pong network to get more women playing in and out of work.