National Championship Programmes Over the Years

With tickets to the PG Mutual Senior National Championships going on general sale this Saturday, we take a look back at the artwork for the programmes – from 1960 to 2018. 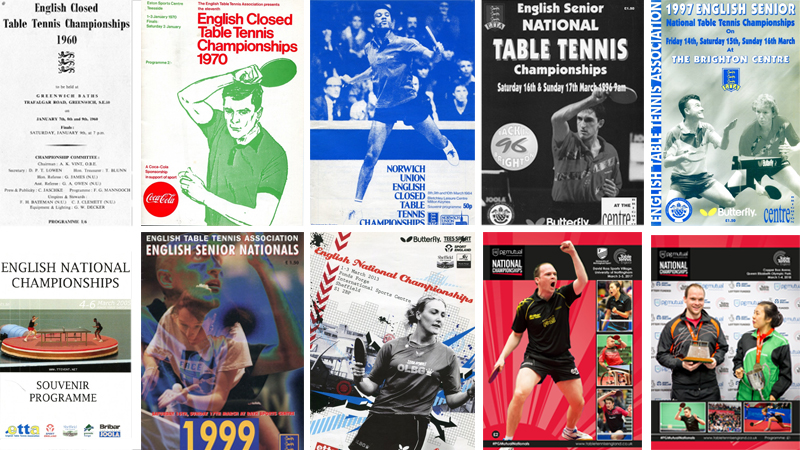 With tickets to the PG Mutual Senior National Championships going on general sale this Saturday, we take a look back at the artwork for the programmes – from 1960 to 2018.

Members and newsletter subscribers of Table Tennis England can buy tickets to the event now in our priority access window. This includes a 20% early bird discount, which ends this Friday (7th) at 11.59pm. To redeem your discount, visit the member benefit section or read this week’s Over the Net. 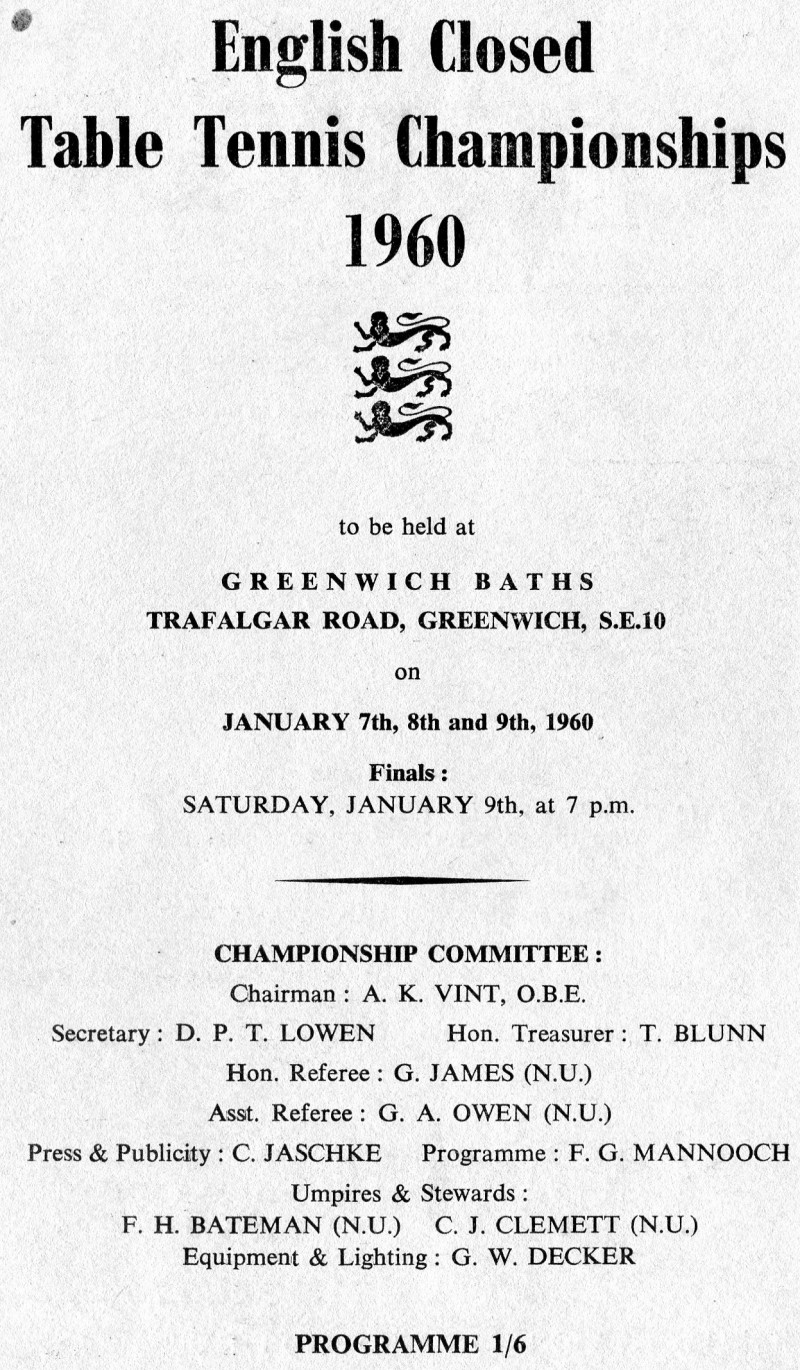 The first English National Championships took place in January 1960 and the programme for this was fairly basic, the front cover listed essential details of venue, date etc as well as the officials involved. The draw was a straight knockout with 81 entrants in the Men’s Singles. Bryan Merrett won the first title, England ranked 2, defeating England’s No 1 Ian Harrison in the final. Diane Rowe, No 1 in the Ladies’ ranking beat the emerging Jean McCree, ranked sixth.

You may notice the name of Colin Clemett who was a member of the Championships Committee and jointly in charge of Umpires and Stewards. The Referee was Geoff James. 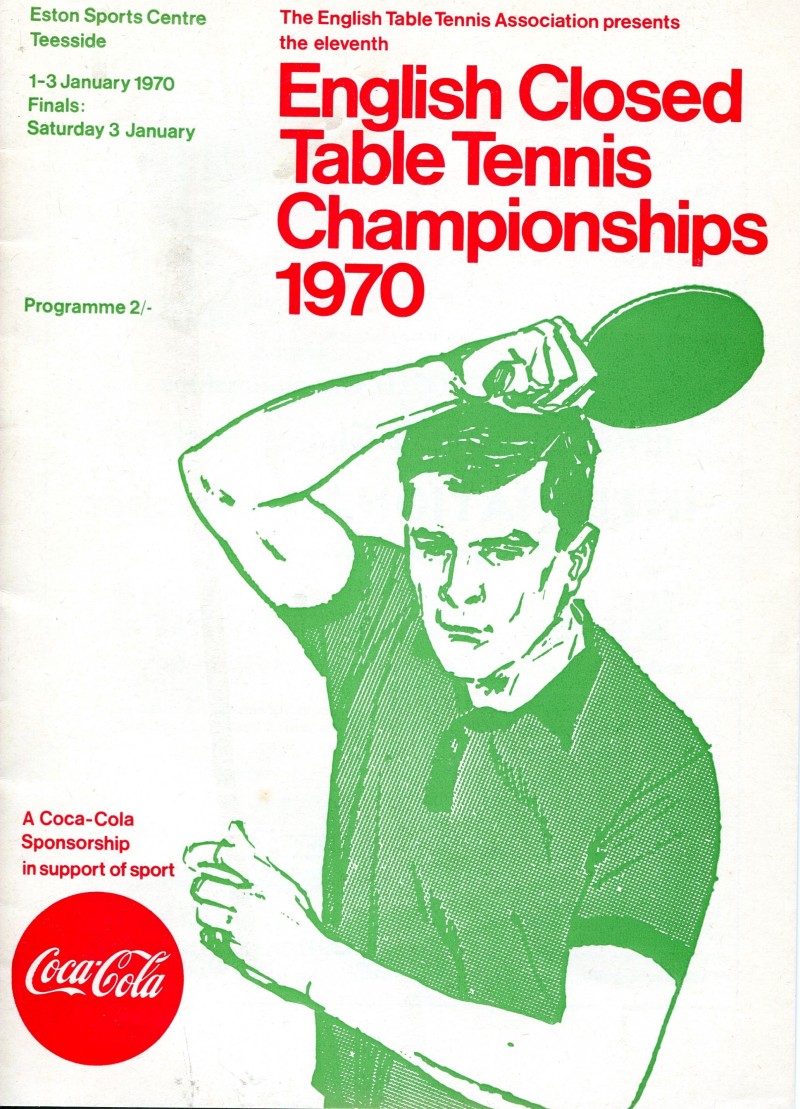 A change in format and the first year a picture was on the front cover. The Championships this year were sponsored by Coca-Cola. The playing format for the five individual events was still a straight knockout. Denis Neale and Mary Wright were the victors in the two singles events and Tony Chatwin was the Referee. 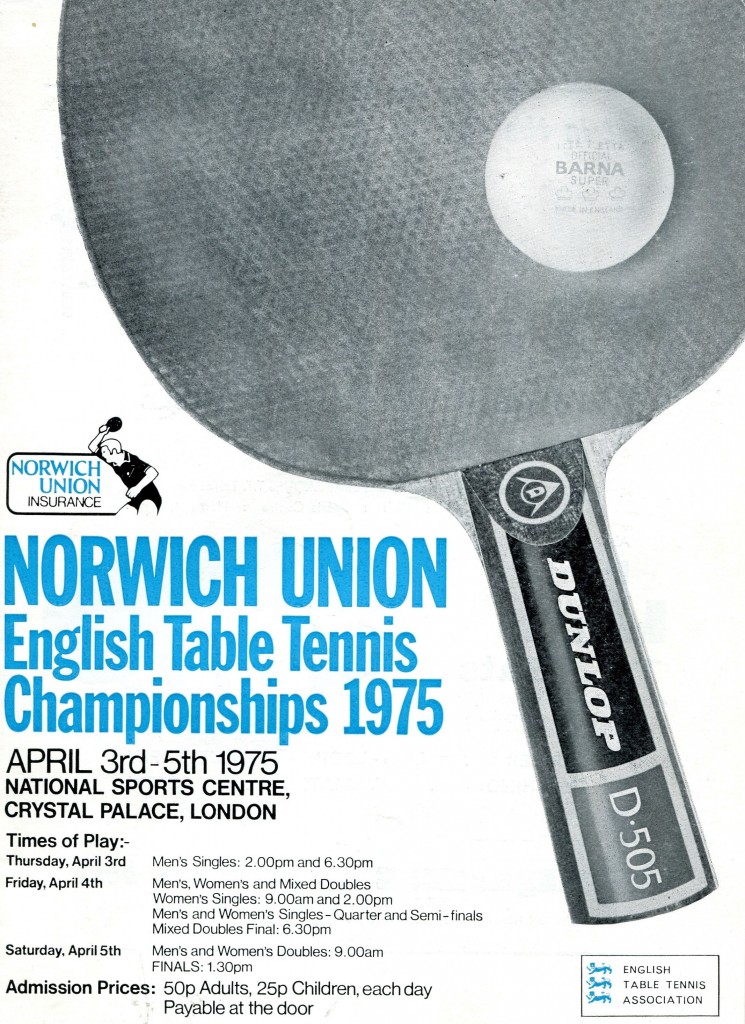 Norwich Union were the sponsors of the National Championships for over 10 years.

In 1975, 126 players entered the Men’s Singles and 36 in the Women’s Singles. The Champions were Denis Neale and Jill Hammersley (Parker) respectively. Len Pilditch was the Referee. 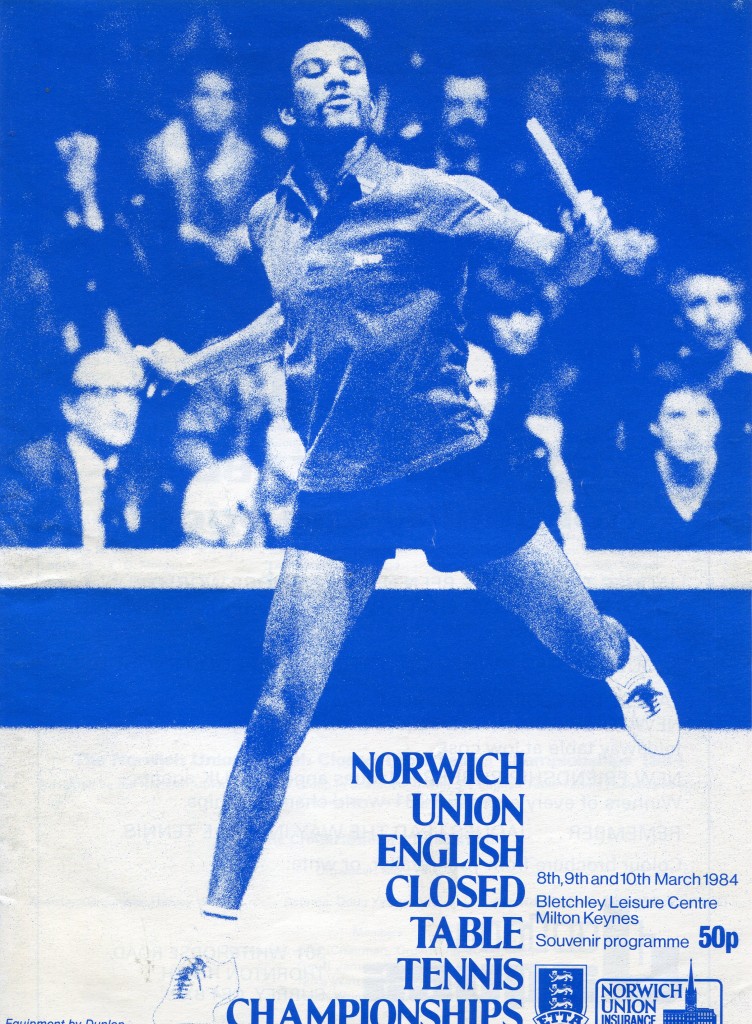 Still being sponsored by Norwich Union this was the first time that a player was featured on the front cover. Desmond Douglas and Alison Gordon took the Singles titles. Veterans’ Singles were also in the tournament and were won by husband and wife, Derek and Doreen Schofield. The Championships Committee was chaired by Doreen Stannard, a position she held for many years. 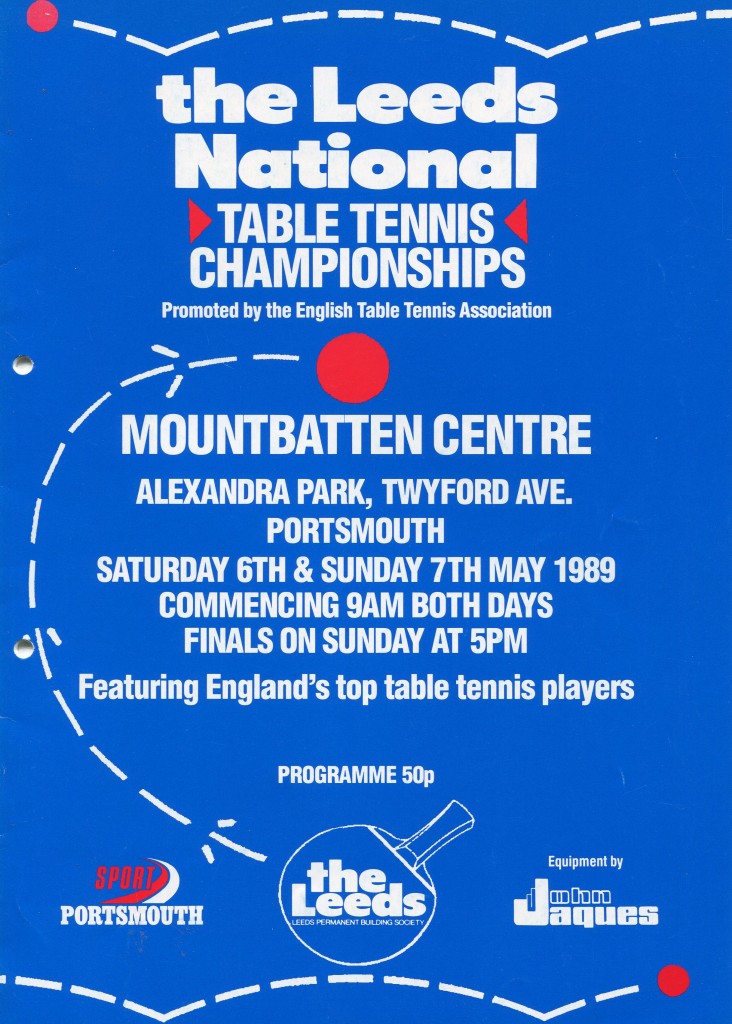 Another major sponsor in the form of the Leeds Building Society. Winners were Alan Cooke and Lisa Lomas in the Singles events.

Added extras in the programme were a crossword puzzle and a space for autographs. 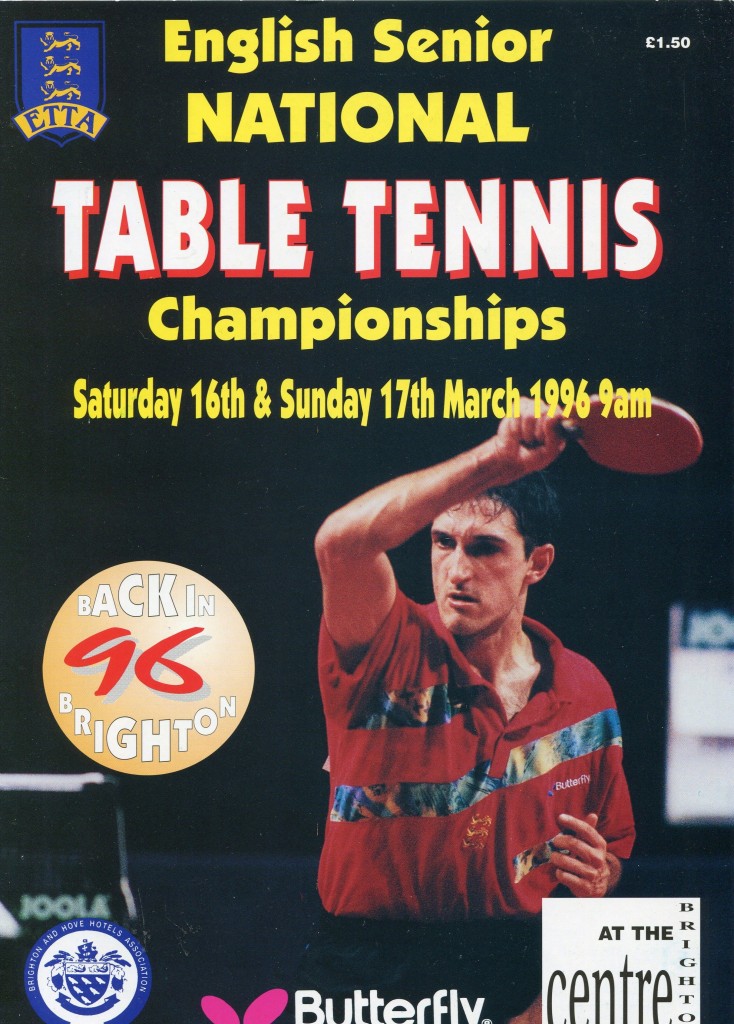 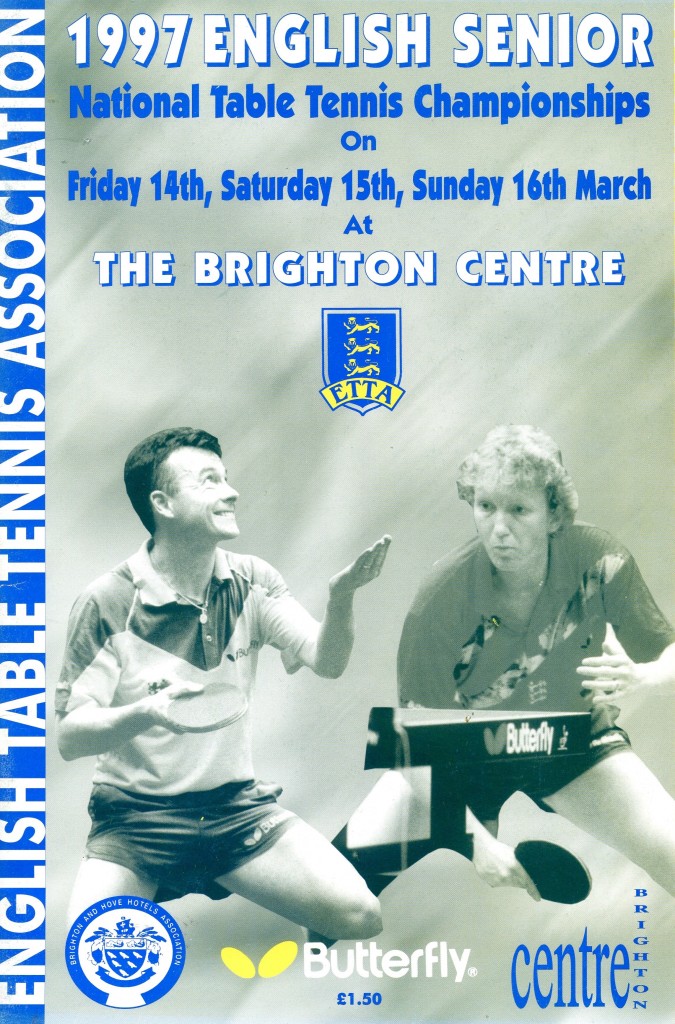 Alison Gordon is featured alongside Alan Cooke on the cover. Groups were introduced for the first time. There were 95 men in the group stages plus the 16 seeds who went straight through to the knockout stages. In the Women’s Singles the numbers were significantly less with only 17 ladies in the group stage plus eight seeds. Winners were Matthew Syed and Nicola Deaton.

The Referee was Mick Strode and Organiser Jill Harris. 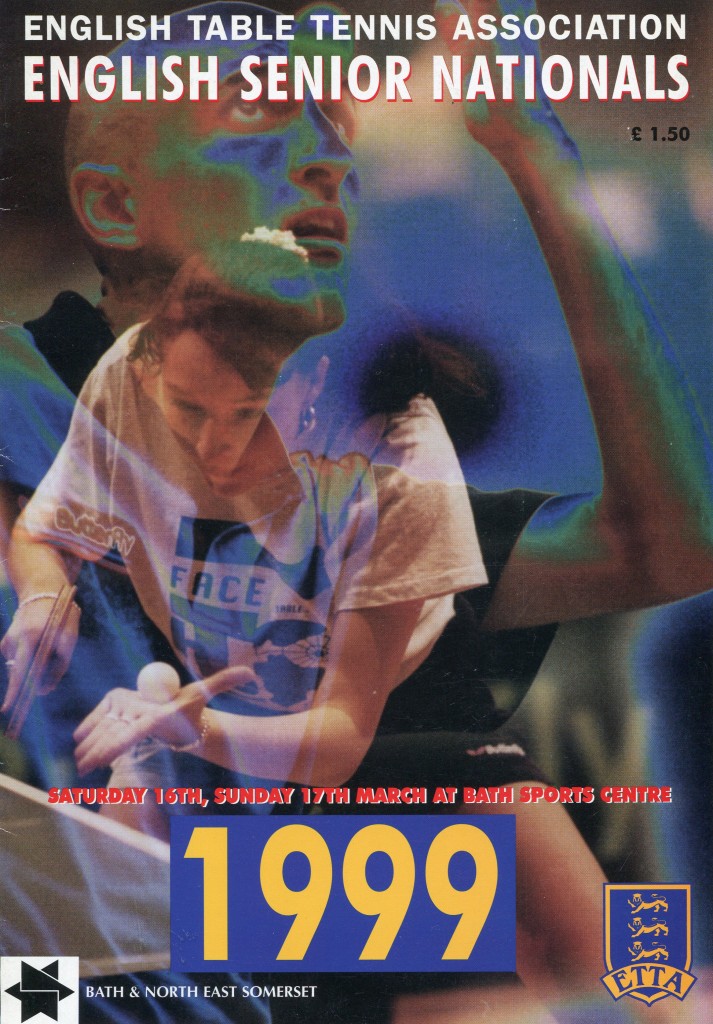 A more creative cover this year which was a replica of the previous year. Nicola Deaton and Matthew Syed are the two competitors on the front cover. This was the last year that the National Championships were played in Bath before their 15-year run in Sheffield. U21 events were now part of the schedule. Men’s and Women’s Singles winners were Alex Perry and Nicola Deaton.

Mick Strode was the Referee again with Harvey Webb as the Organiser. Doreen Stannard, as well as being National Championships Committee Chairman, was the Umpires Manager in charge of the 20 umpires. 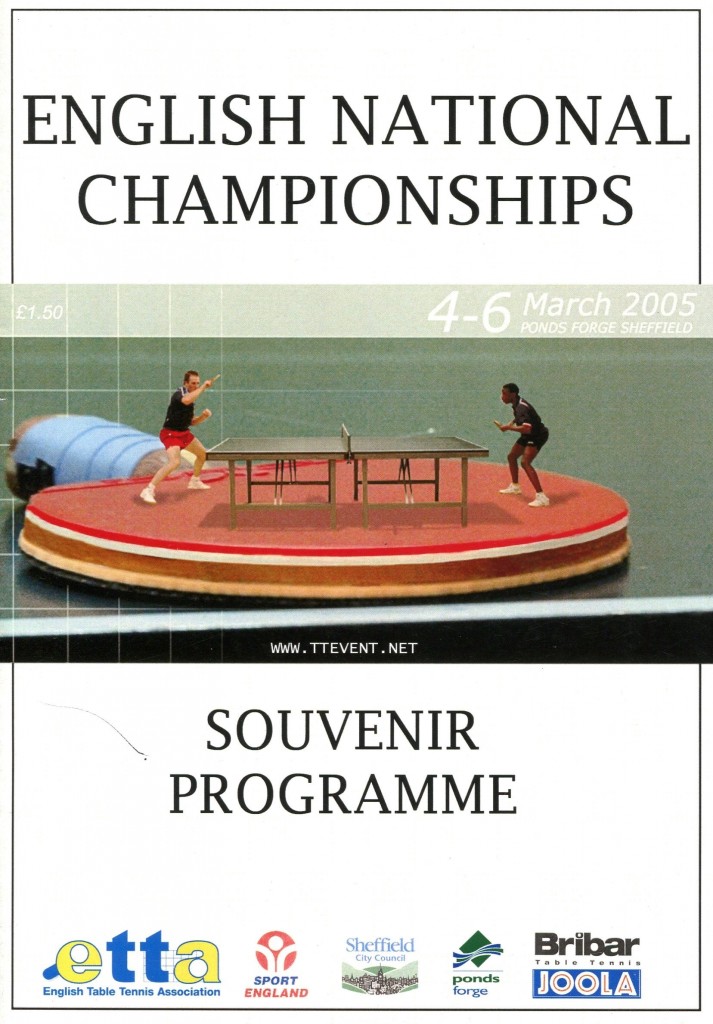 A change in style and size for the programme this year, it also had a loose leaf insert for the draw. Ponds Forge, Sheffield, which almost became the home of the National Championships and is synonymous with them over recent years, was the venue. The two youngsters, Paul Drinkhall and Darius Knight, graced the front cover. Singles Champions were Alan Cooke and Helen Lower.

Stuart Sherlock was the Referee with Graham Rogerson the Organiser and Liz Wilson the Umpires Manager. 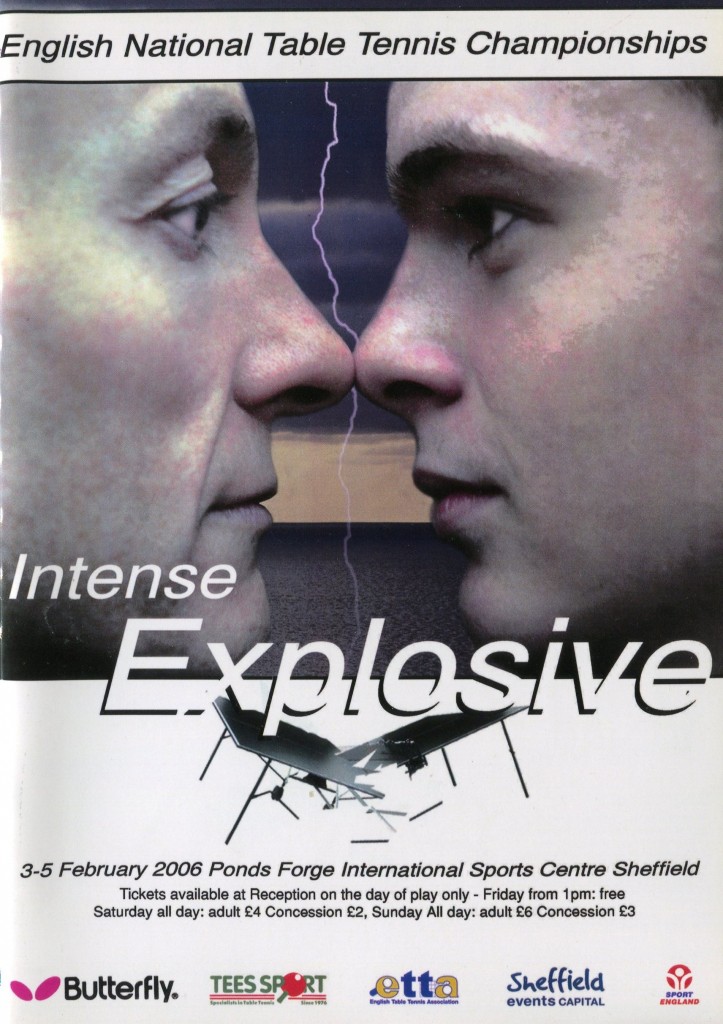 An explosive cover and perhaps my favourite.  Alan Cooke and Paul Drinkhall face each other on the cover but never in the competition which was won by Alex Perry, who defeated Andrew Rushton in the final. In the semi-finals Andrew was the first Englishman to beat Alan Cooke in four years. Helen Lower again took the Women’s title.

There were 114 male entries and 41 women in total. 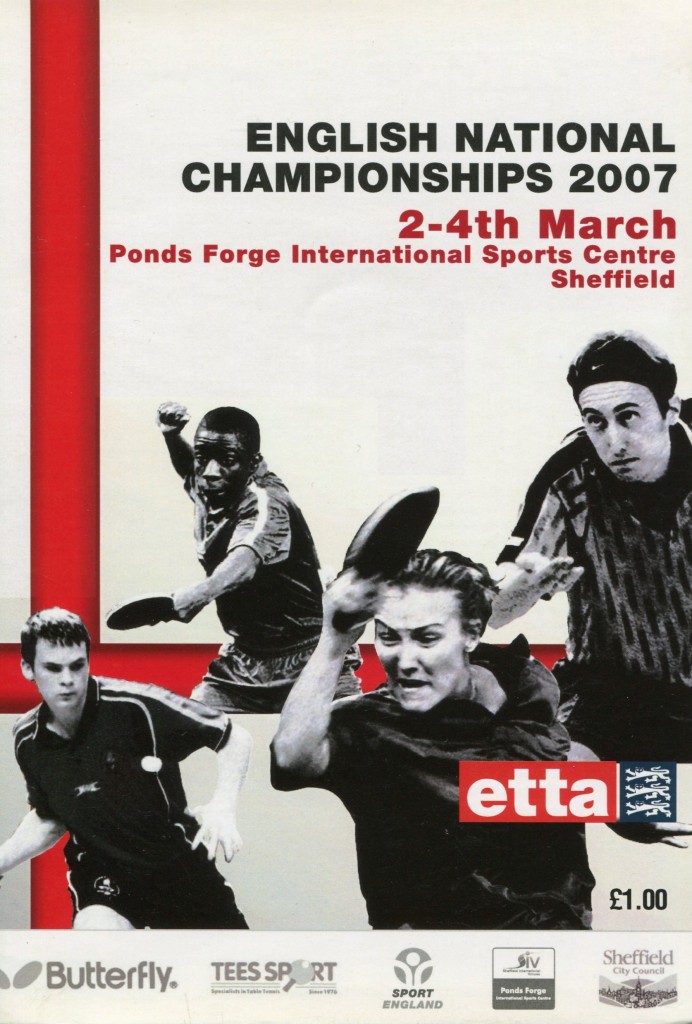 Another change to the cover with our national flag on the front along with images of Paul Drinkhall, Darius Knight, Kelly Sibley and Alex Perry. Paul Drinkhall won the first of his, to date, four Men’s Singles titles whilst Helen Lower was the Women’s champion for the third time.

A full schedule, with the five main events, along with U21 and Veterans’ events plus an invitation Disabled Singles.

Steve Welch was the Referee and Dave Evans the Organiser. 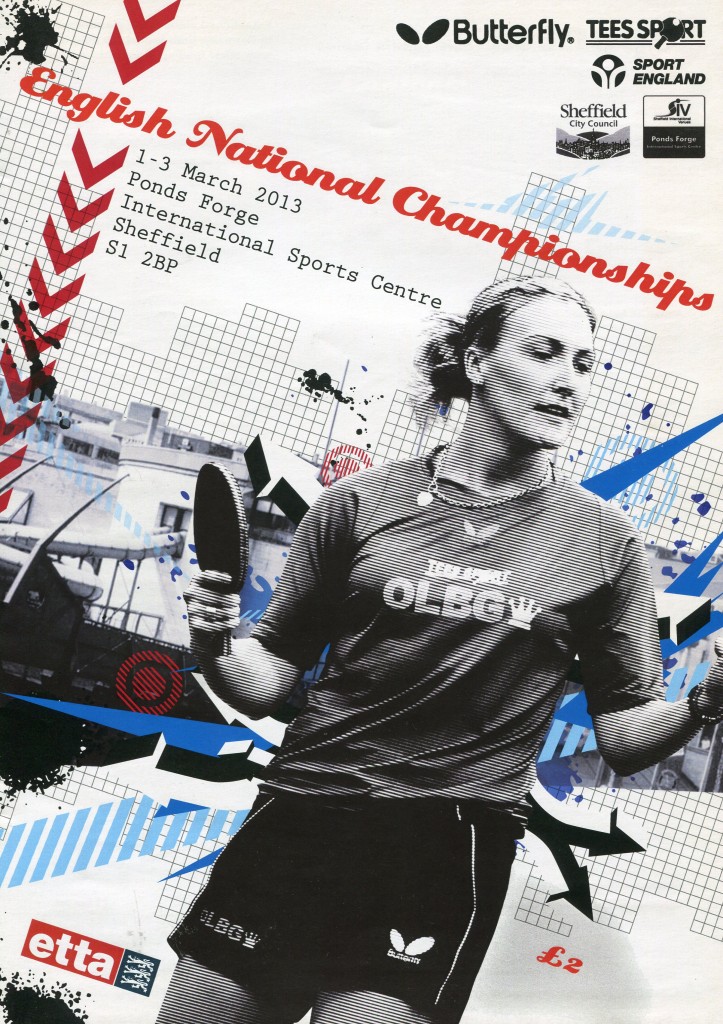 The sixth of seven years where the same background was used with an image of a leading player superimposed.

Winners of the two main events were Liam Pitchford and Kelly Sibley, the fourth of her titles.

Steve Welch again took the Referee’s hot seat with Jim Kenny as the Organiser, Margaret Calver was the Umpires Manager. 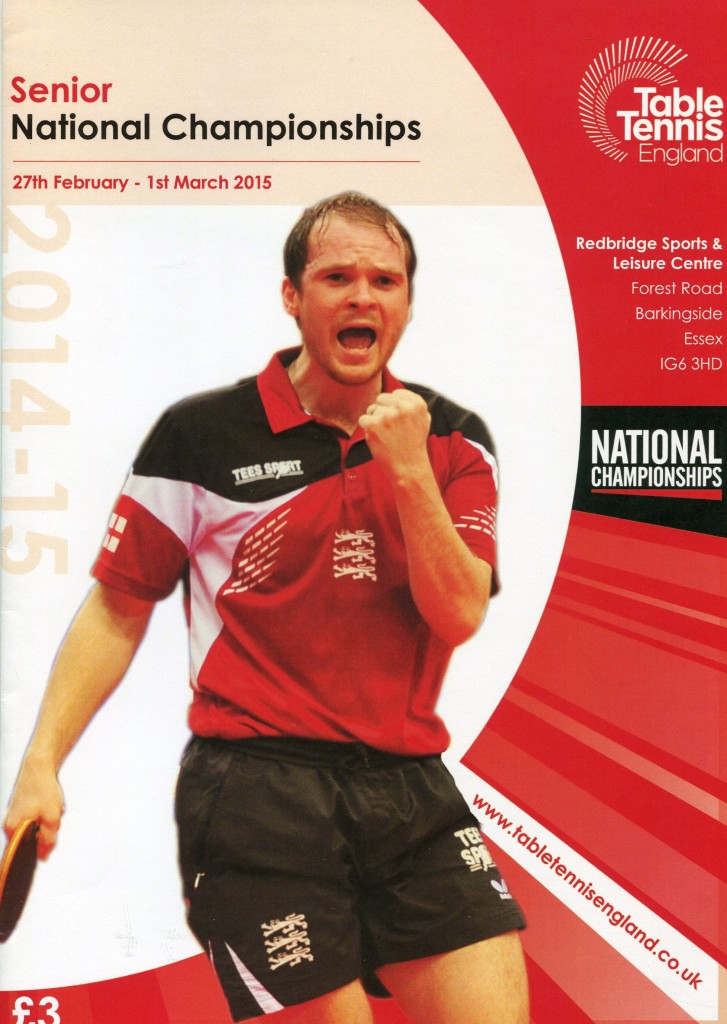 A new era, a new image and a new venue. A sad farewell was said to Sheffield which had served the Association so well for 15 years.

The first year of PG Mutual’s sponsorship as the Nationals moved to Hertfordshire Sports Village in Hatfield, and para events were incorporated, with four different categories.

A special presentation was made, in front of a standing ovation, to the England squad of Liam Pitchford, Paul Drinkhall, Sam Walker and coach Alan Cooke, who were fresh from winning the bronze medal at the World Team Championships in Kuala Lumpur a fortnight earlier.

The referee was Steve Smith and the programme, featuring Liam Pitchford as the main image on the cover, cost £3.

The University of Nottingham’s magnificent new David Ross Sports Village was the host for this year.

Again, the Nationals was filmed, but this time an hour-long highlights programme was shown on Sky Sports, while the last three finals were streamed live on the SPORTBible Facebook page.

The referee was Brian Jackson and the two main titles remained in the hands of Paul Drinkhall and Tin-Tin Ho. The programme cost £2.

Another new venue as the PG Mutual Nationals moved to the Copper Box Arena on London’s Olympic Park, the week after the venue had hosted the ITTF Team World Cup.

The draw for the event was carried out the day before the competition and streamed live in FA Cup-style format. The final day of the event was shown live on the BBC Sport website, which had also carried the Team World Cup.

The singles champions were Liam Pitchford and Tin-Tin Ho and the programme, reflecting the fact that the draw was not included, cost £1.

This year’s programme has gone on sale for £1.50 and for the first time, you can purchase a programme when you order your tickets online, and pick it up at the venue on the day.