Gold for Matthews and Daybell in Italy 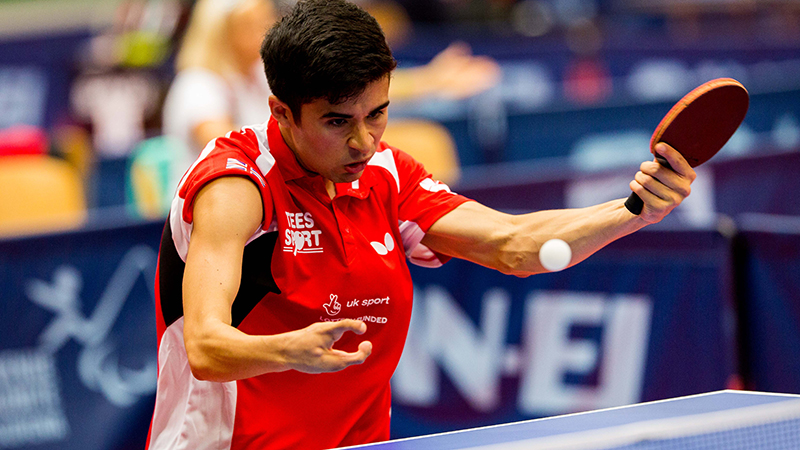 Matthews topped his group with three wins from three and after surviving a fightback from the very experienced Sylvio Keller from Switzerland to win his quarter-final 3-2 he produced a great performance to beat the Italian Federico Falco 3-1.

Having beaten his opponent Fernando Eberhardt 3-0 in the group stages, Matthews found the Argentinian a much tougher proposition today and the Welshman had to fight hard for the gold medal in a 3-2 win.

“I think I played well,” said Matthews. “I need to be more clinical at times but that will come with experience. I was a bit nervous in the final and at 2-0 down I had to dig deep but I found my level and came back from 8-6 down in the fifth to win so I’m really pleased with that.”

Daybell has grown in confidence since winning his first major medal at the European Championships last year and the 25-year-old, who will represent Team England at the Commonwealth Games next month, did not drop a set on his way to winning gold in men’s class 10, beating Serhii Boiko from Ukraine in the semi-final and the German Lion Bauer in the final.

“I feel like I put a professional performance in throughout the event and am pleased to come away with the gold medal,” said Daybell. “There were lots of potentially difficult players in the draw so it was nice to come through so comfortably.

“This gives me confidence going into the Commonwealth Games in a few weeks’ time and hopefully I can carry this form through the World Championships later in the year.”

Bayley looked sharp in his three group matches and a 3-0 win in the quarter-finals against the Frenchman Esteban Herrault set up a semi-final against Mykhaylo Popov, the Ukrainian who beat Bayley at the same stage on his way to winning the European title last year.

This time it was Bayley who produced his best in a 3-0 win but he had to settle for silver after a close match against world No 1 Maksym Nikolenko which the Ukrainian won in four close sets.

“I feel that I played a great semi-final,” said Bayley. “It’s always a hard match against both Ukrainian players but I played tactically perfect against Popov.

“The final was very close and I won a good first set but then Nikolenko changed tactics and I struggled to adapt. I feel I should have won the fourth set having been 9-7 up but I have to congratulate Nikolenko – he played a great match.”

Karabardak reached the final of men’s class 6 without dropping a set but came up against the European bronze medallist Bobi Simion, who had ended Wetherill’s challenge in the semi-finals. The 32-year-old from Swansea started well but the Romanian came back strongly and took the gold with a 3-1 win.

“I thought I played some of my best table tennis on the way to the final,” said Karabardak. “Bobi is a very tough opponent for me and he was also playing really well. Unfortunately, I came up a bit tactically short and he was able to exploit my weaknesses but I’m really happy to come away with a silver medal as I feel it was a solid start to the season with plenty of positives and things I can improve on.”

Wetherill won his three group matches and reached the semi-final with a 3-0 win in the quarter-final against Danny Bobrov from Israel before losing his semi-final to Simion in three close sets.

Facey Thompson partnered Daybell to win European team silver and he also made a good start to his international season by coming through his group without dropping a set. That gave him a bye into the semi-finals where he found Lev Kats from the Ukraine just too strong in a 3-1 loss.

“I played OK,” said Facey Thompson. “It was hard to get into the match in the semi-final and I was struggling to put easy balls away. But I will have to learn about these situations and hopefully I can perform better in the team event.”

Stacey only made his international debut in Belgium last October but has already made a great impression and after winning his group he came through his quarter-final against the Romanian Daniel-Alexandru Dinca 3-0. His reward was a semi-final against the home favourite and number one seed Mohamed Kalem and the Italian world No 5 was in top form and reached the final with a 3-0 win.

“I didn’t play my best table tennis,” said the 18-year-old Welshman, “but Kalem was too good today. It was good to test myself against one of the best players in the world and it showed me the level that I need to be at to become one of the best.”

McKibbin came through his group undefeated and after a 3-0 win against Zeev Glickman from Israel he pushed the world No 1 Viktor Didukh all the way in their semi-final before the Ukrainian eventually triumphed 3-2.

“I feel that I have played very solidly this competition,” said the 26-year-old Londoner. “Every round up until the semi-final I won 3-0 and I was receiving serve well which I have been working on in training.

“In the semi-final I felt in patches that I played very strong and was bringing things into my match play that I have been working on since the Europeans last year. I let myself down in some of the sets by making the wrong decisions and letting it get away from me but it is the second time in a row I have pushed him (Didukh) to 3-2 and I feel that I am getting closer to turning that result into a win.”

Wilson also topped his group and reached the semi-finals with a 3-0 win against Roman Vakarash from Ukraine but he had to be content with bronze after a 3-0 loss to another Ukrainian Ivan Mai.

“I don’t feel that I played my best today” said 22-year-old Wilson, “but I’m hoping that I can change that in the team event. It’s a positive for me that I have started the year off with a medal and I am looking to improve on my performance going forward.”

Billy Shilton came very close to setting up an all-British semi-final against Wilson in men’s class 8. The 19-year-old topped his group and after battling his way to a 3-2 win against the Norwegian Pablo Jacobsen in the last 16 he fought back from 2-0 down against Mai in the quarter-final but was just edged out 17-15 in the fifth.

The competition continues with the team events.