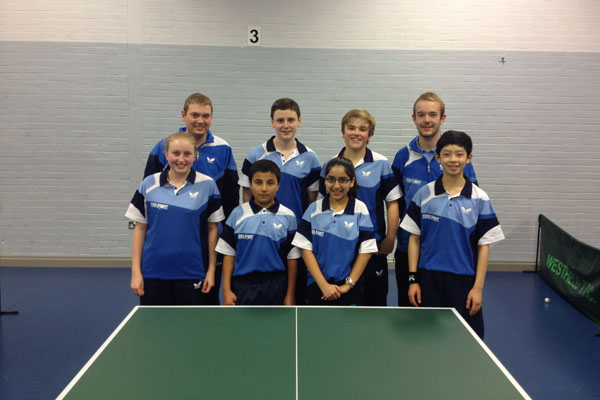 Yorkshire were the star performers at this season’s County Championships Premier Division which was played last weekend as they took the title without losing a match after being relegated from the division just two years previously.

A major shock over the weekend in this most competitive of divisions was the performance of Cleveland who were runners-up last season but ended the competition relegated despite leading the event after the first three rounds of matches.

Westfield TTC once again hosted this season’s event as last year’s champions Lancashire attempted to regain the title they won last time out.

The event was played over one weekend with all teams playing three matches on Saturday followed by a further four on Sunday. In the first round of matches it was Cleveland who took the advantage by recording a 7-3 win over former champions Sussex with late replacement Kaine MacDonald and Sophie Barlow leading the way with unbeaten performances. They were supported by teammates Josh Harland, Joe Clark and Holly Williams who each picked up one win to ease last season’s runners-up to the win.

The other victory in the first round came from another former champion team as Middlesex recovered from 2-0 down to reel off five straight wins and record a 6-4 victory. However, the major excitement in the round came from the other two matches which both ended in exciting draws as Lancashire drew with Surrey and Yorkshire and Lincolnshire shared the spoils.

The second round of matches saw 7-3 wins from Middlesex over Lincolnshire and Cleveland over Warwickshire but the real excitement was in the other two matches as Sussex beat Lancashire 6-4 which was matched by Yorkshire who beat Surrey by the same score.

Surrey then staged a great comeback by rattling off the next three sets to draw level after Gillen beat Rule 3-2 (11-5, 11-9, 9-11, 10-12, 11-6 followed by two comfortable wins by Moussarie over Duhan and Grant over Hobson both in three as the sides were now level after eight rubbers.

Standings at the end of day one

Sunday morning saw the top two come face-to-face and it was Yorkshire who moved into top gear reeling off set after set to take command. It was not until the seventh set of the match that Surrey got anything on the board Surrey only managed to register twice. Yorkshire eased to an 8-2 win with James Hobson, Harry Dai and Kate Nixon all remaining unbeaten for the White Rose County.

Also in this round last-placed Warwickshire picked up their first point of the campaign as they drew with Sussex.

The fifth round of fixtures saw Yorkshire and Surrey consolidate their positions at the top of the leaderboard with wins over Lancashire and Warwickshire respectively while relegation threatened Lincolnshire and Sussex slugged out a draw. Cleveland could not halt their drop down the table as they lost to Middlesex 6-4, which saw Middlesex move into third place just one point ahead of Surrey.

Round six saw Yorkshire take a giant step towards their first county cadets title with a 7-3 victory against former champions Sussex which saw James Rule and James Hobson steer their county home with unbeaten performances. Team mates Siraj, Nixon and Duhan each pitched in with one win apiece as things were looking good for the northern county.

Sadly Cleveland were now in free fall and were not helped by the withdrawal of No 1 Josh Harland due to a hand injury as they lost to Surrey 10-0 as the southern county still kept up the pressure on Yorkshire.

The final round of matches saw Yorkshire face bottom county Warwickshire needing only one point to take the title and this was reached in the sixth set as Guari Dunham beat Lisa Rinnhofer 3-0 (11-8, 11-8, 11-6) as the new champions confirmed their title with a 9-1 victory. Only Timmy Cooper’s 3-0 (13-11, 11-7, 11-5) win over Siraj slowing up the White Rose juggernaut.

Warwickshire were already doomed but the remaining two relegation places were decided between three teams who all ended the campaign on five points. The sorry-looking Cleveland filled one of those places and they were joined by Lincolnshire who had a slightly inferior games ratio to Sussex who lived to fight another day.

This was a splendid weekend long performance from the Yorkshire squad of James Hobson, Harry Dai, Shyan Siraj, James Rule, Kate Nixon and Gauri Durhan who were well supported by coaches Chris Parker and Andy Bray.