England’s quartet have been handed mixed draws ahead of the World Championships, which starts in Houston tomorrow. 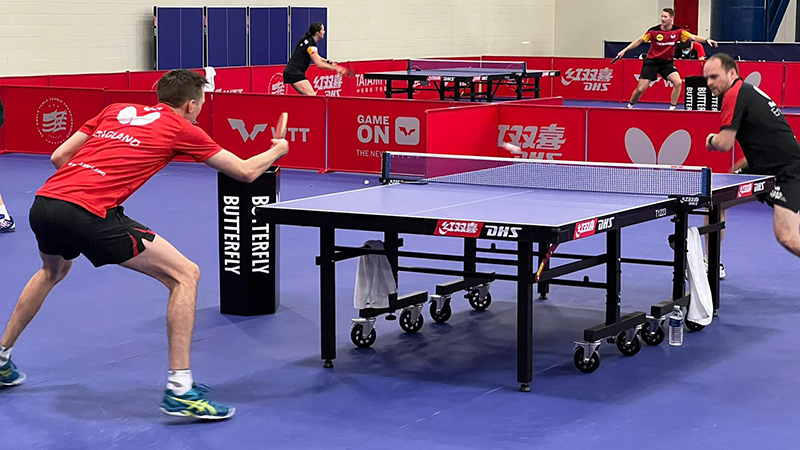 England’s quartet have been handed mixed draws ahead of the World Championships, which starts in Houston tomorrow.

Liam Pitchford, the 11th seed, will face Ukraine’s Kou Lei in the round of 128. His opponent, ranked 59, beat him at the 2015 European Games, but Liam won their last meeting at the 2019 Bulgarian Open.

Paul Drinkhall was handed a tough opener against world No 24 Marcos Freitas of Portugal but can take heart from having won their two previous meetings, at the 2014 Russian Open and at the 2015 European Games.

Meanwhile, Sam Walker will face world No 147 Daniel Gonzalez of Puerto Rico, an opponent he has never previously played. Victory would likely see him face 2016 European champion Emmanuel Lebesson of France – and top seed Fan Zhendong of China would almost certainly be waiting in the last 32.

In the women’s singles, Tin-Tin Ho faces French opponent Marie Migot (WR 176) in the first round, with the winner due to play No 5 seed Cheng I-Ching of Chinese Taipei, who has a bye into the second round. Ho last faced Migot at the 2016 Europe Youth Top 10, winning 4-1.

In the doubles, both pairs involving English players have a bye into the second round. Pitchford & Drinkhall will play the winners of the tie between Kai Zhang & Nikhil Kumar (USA) and Pavel Platonov & Aleksandr Khanin of Belarus, while Ho and her Austrian partner Karoline Mischek will face either Orawan Paranang & Suthasini Sawettabut of Thailand or Natalia Bajor & Natalia Partyka of Poland.

When are the matches?

The singles matches all take place on Tuesday at the following times (UK):

This is the first World Championships since 2019 – the 2020 Team event was cancelled because of the pandemic. It is also the first Worlds to be held in the Americas and the first to be held outside Europe or Asia since 1939 in Cairo.

The four English players competing were the only ones to meet the ITTF’s qualification requirements, based on a continental quota system and the world rankings.

Here’s what they had to say ahead of the competition:

“I’m feeling quite excited and looking forward to playing again and just trying to continue with what I’ve been working on in training and take it into the matches.

“I want to try to be sharp and aggressive and put opponents under pressure.”

On the doubles: “Karoline and I know each other very well and play well together. It’s always fun to play with her and I think we’re quite comfortable with each other’s games.”

On the first Worlds in the Americas: “I’m quite surprised it’s the first, but it’s good that the World Championships is expanding into new countries. I think it will be really cool and they’ll make a good job of it.”

“It’s always exciting to play at a World Championships and obviously this is the first for a while after everything else that’s been going on.

“It’s probably the hardest tournament to win in table tennis, including the Olympics, and I’m looking forward to the challenge.

“I feel I’m in a good place now and I’m finally starting to get some sort of form back after covid and getting injured. There’s no pressure on me – it’s just go out there and give it my best shot, enjoy it and put in some good performances.”

Walker has played once before in the States, in Washington DC in a Bundesliga match for Grunwettersbach – he defeated Jancarik of Mulhausen 3-0 and his team won the match overall.

“I think it’s a good thing it’s in the USA – the World Championships is a world event and shouldn’t just be in Europe or Asia.

“To not have a World Championships in the Americas is a bit surprising and it’s good that the players from that part of the world don’t always have to travel long distances every year.

“So it’s only fair that it’s in America and it’s also good to have big events in big cities like Houston because then there’s more people that’ll be interested to watch, and that’s important for table tennis moving forward.”

“I feel good, relaxed, happy with where I’m at and probably going into it with a bit more confidence than I’ve had for a while.

“I’ve been happy with how I’ve been training and I’ve played quite a few matches recently and performed better and better. I’m doing the right things in training and trying to take that into matches.

“I just want to take one match at a time. Every match is difficult, particularly the first match. I will just prepare as best as I can to go out there and be on my game from the get-go. If I can get into the tournament and find the flow, it will get better from there.”

On the doubles: “We’ve proved we’re a top pair. We’ve had good results at the Commonwealth Games and on the World Tour and been to the quarter-finals of the Europeans, and we can take that into the Worlds.

“On our day, we’re probably one of the best in the world and if we relax and play our game, we can beat any pair.

“We haven’t played together as much as we would like, but we gel as a pair and complement each other and enjoy playing together, so we don’t need to practise that much.”

On host city Houston: “I think it’s a good step for table tennis and obviously a big market in the USA. If table tennis can grow there, it’s good for the sport.

“Hopefully it can be a good showcase and I’m pretty sure it will be a cool event. They know how to put on a show.”

“I’ve been quite active recently with league matches and the Slovenia event, and that’s always good going into a tournament.

“I’ve had a few good matches as well, beating (world No 7) Lin Gaoyuan, and that one being a decent win is good for me.

“To be honest, I don’t have any expectations. I try not to think about that but I’m in a decent place and I just want to perform well and do myself justice. I hope I can leave the tournament, whatever stage that’s at, knowing I’ve done well. Obviously, the later you leave, the happier you’re going to be.”

On the doubles: “When we click, nobody is going to want to play us. We haven’t played that much recently, but it’s about going out and putting in place what you can do – and if we do that then whoever beats us will themselves have played well. We want to put ourselves into the position where we’re hard to beat.”

On the venue: “We’ve had practice in the venue and it’s linked to the hotel and the set-up seems really good. I’ve heard it’s a sell-out but I’m not sure if there’s any covid restrictions on numbers but hopefully there will be a lot of spectators in to give us an atmosphere.”