Commonwealth champion Ross Wilson followed up his gold on the Gold Coast by successfully defending his National titles in the Open Standing and Class 8 events at the British Para Table Tennis National Championships in Grantham this weekend. 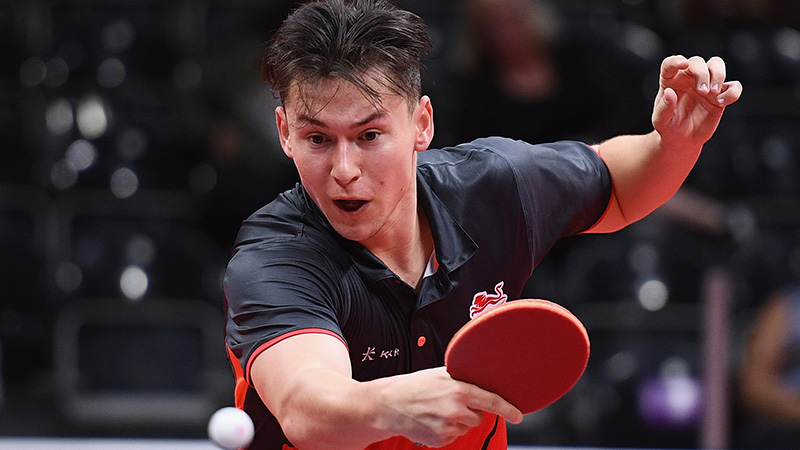 Commonwealth champion Ross Wilson followed up his gold on the Gold Coast by successfully defending his National titles in the Open Standing and Class 8 events at the British Para Table Tennis National Championships in Grantham this weekend.

The Open Standing class was unsurprisingly dominated by the British Performance Squad and after recovering from dropping the first set to beat Paralympic champion Will Bayley 3-1 in the semi-finals Wilson was a 3-0 winner in the final against Ashley Facey Thompson, who had put up a great performance to beat Commonwealth silver medallist Kim Daybell 3-2 in their semi-final.

“It is a really special feeling to be National champion,” said the 22-year-old from Minster, “and it is great to win when the standard is so high now.

“I think I’ve played well throughout the competition. I’ve just felt more stable lately – playing from within myself and having confidence in my own ability and that is something I have improved lately and something I am going to continue to use going forward.”

Wilson had earlier retained his class 8 title with a 3-0 win in the final against his team partner and housemate Aaron McKibbin, who came through a close semi-final against 19-year-old Billy Shilton 11-6 in the fifth.

Liverpool’s Hunter-Spivey beat Gilroy 3-0 to win the Open Wheelchair title and defeated​ ​Dan Bullen from St Neots​ in the final to win the class 4-5 event.

“It was a good performance,” said Hunter-Spivey, who has not lost a match at the National Championships for five years. “Every year the standard gets better and better and the competition gets stronger.

Gilroy has been the dominant force in women’s wheelchair table tennis in the UK for more than 20 years but was pushed to five sets on two occasions by 18-year-old Shackleton and was full of praise for her young GB team partner.

“Megan has really come on,” she said, “and I knew it was going to be tough because I’ve only been back in training five or six weeks after major surgery. To win the National title 23 times is a massive thing and I’m really proud to be National champion again.

“It would be great to see more wheelchair players coming through – class 4-5 was mixed this year and I certainly didn’t expect to get through to the final but I really enjoyed playing Jack. I am sure Megan will be pushing for the title next year as she is a really talented player.”

Fliss Pickard received some compensation for just missing out on a medal at the Commonwealth Games by taking the Open Women’s Standing title, defeating Tamar Pickford in the final 3-0.

“I’m pleased because we are close friends,” said Pickard, “and we know each other’s game inside out.  Last year when we played each other it was a huge 3-2 battle so I just wanted to go about things today with more quality and go forward from what I learnt in Australia. I was able to dictate the match and keep the intensity up so I’m very happy.

“The Commonwealth Games has really inspired me and pushed me on. This is what I want to do now and I 100% believe that I can.”

“I started off a bit slow,” he said, “and it was hard to get into it but I felt that I played well in my second match and really well in the final so I’m quite happy with the way I played, to be honest. To be National champion is a big thing for all of us and I’m gutted I couldn’t play Rob but maybe next year.”

European team gold medallists Paul Karabardak, David Wetherill and Martin Perry dominated class 6 and it was Karabardak who came out on top, beating Wetherill in three close sets in the final (10, 9, 10) to take the title.

“I had a tough game against Martin in the group,” said the Welshman. “I didn’t start that well but I managed to get into the game and then dictate what I wanted to do.

“In the final I think it is the best Dave has played against me. I had a bit of luck so I’m very happy to have won the Nationals again. It is one of the tougher classes because we are all highly ranked so it is getting harder to win but as the saying goes ‘iron sharpens iron’ so we push each other and make each other better.”

Bayley did not drop a set in defending his class 7 title but had to play well to beat Alex Bland in the final 3-0.

“I think I played some good stuff today,” he said. “I was really positive and went for my shots and tried to play at the top level and not to give any cheap points away. That is the way I played so I’m really happy to win another class 7 title.”

Londoner Facey Thompson had to work hard to defend his class 9 title – fighting back from 8-5 down in the fifth to beat Commonwealth bronze medallist Josh Stacey in the final.

“I’m really happy with the way I played against Josh,” he said. “He is a rising player and quite dangerous and he makes you doubt your game a bit and then you get nervous.  After I lost the first set I believed more and played my table tennis. At 5-8 in the fifth I was just more disciplined with my shots and I was more focused and knew what I needed to do.”

Last year’s Junior champion Jack Stockdale took full advantage of the absence of defending champion Kim Daybell to win the class 10 National title and in the Junior Open singles 14-year-old Dylan Tynan from Falmouth produced a great comeback from 2-0 down to beat Tamlan Eastwood 11-6 in the fifth.

“It means a lot to be National champion after training all these years,” said Tynan, “and winning a title is good especially coming back from 2-0 down. I’ve played Tamlan a few times but this is the first time I’ve played him in a proper tournament and it was a tough match.”

Hunter-Spivey and Bullen combined to defend their Open Wheelchair Doubles title, defeating Gilroy and Shackleton in the final 3-1 and Grantham College students Stockdale and Stacey took the Open Standing Doubles title with a 3-0 win in the final against Adam Thompson and John Potts.

“I was a bit disappointed to have lost in the singles final when leading in the fifth set,” said Stacey, “but Ashley upped his game and was better than me today. It felt really good to win a National title and even better that it was with a friend as Jack and me study together at Grantham.”

The evergreen Kevin Plowman secured another National title with a 3-1 win in the class 3 final against his doubles partner Roger Hales and Harry Fairchild beat Andrew Tonkin to win the Down’s Syndrome final.