With exactly two years to go to the Birmingham 2022 Commonwealth Games, Ross Wilson is relishing the chance to defend his title in front of a home crowd. 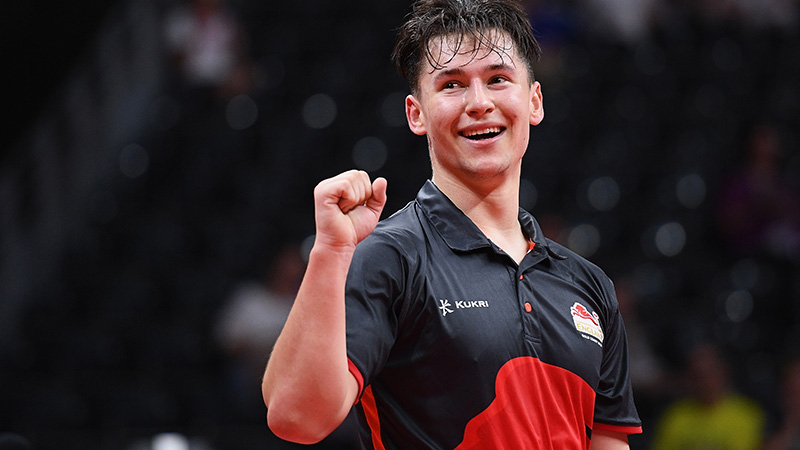 Today marks two years to go until the start of the Birmingham 2022 Commonwealth Games on the 28th July – and not even a global pandemic has stopped Team England stars working hard to deliver success for the home nation in 2022.

The 22nd Commonwealth Games will be held in Birmingham, the third time that England has hosted the Games in its history. It will be the first home Games for England since Manchester 2002, 18 years ago.

“The two years to go landmark is something that Team England as the home nation of Birmingham 2022 is thrilled to embrace. These home games which are right on our doorstep will give our fans the opportunity to support our English athletes and give them the best chance to succeed. Table tennis has always been a key part of the sporting programme for Team England and we have enjoyed working closely with Table Tennis England to great success on and off the court at previous Commonwealth Games. We’re delighted that para table tennis will also be returning to the programme in two years’ time.”

At the Gold Coast 2018 Commonwealth Games, Team England won two gold, two silver and two bronze medals in table tennis. This included taking home both gold and silver in the men’s TT6-10 singles as teammates Ross Wilson and Kim Daybell battled it out for the number one spot with Ross coming out on top.

Ross Wilson is relishing the chance to defend his title in front of a home crowd.

He will have the chance to repeat the feat on home soil in 2022 after para table tennis had its place at the Games confirmed last year – although he has a date at the Tokyo Paralympics first.

Wilson said: “Winning a gold medal for Team England at the Commonwealth Games was one of the biggest achievements of my life so far. It was an absolute pleasure to represent England and to bring back the gold medal was a feeling I will never forget.

“It was the first competition I’ve done where Para players compete alongside able-bodied players so it was an experience in that way. The Games were so well organised and we had a brilliant team; we all got on so well and it was just a fantastic experience.

Table Tennis will be played in the NEC at Birmingham 2022.

The Games will bring together 6,500 athletes and officials in one of the youngest cities in Europe (around half of its residents are under 30); cheered on by an inclusive, welcoming and sport-loving city region that is already home to 187 nationalities from around the Commonwealth and the rest of the world. With a richly vibrant and diverse population, what better place to bring together a successful Team England, united in its diversity.

More information about all of the venues for the Birmingham 2022 Commonwealth Games, which are located in the host city and across the West Midlands region, is available at www.birmingham2022.com where you can also sign-up to receive regular updates about the Games over the next 24 months.