Wilson and McKibbin get wins on the board 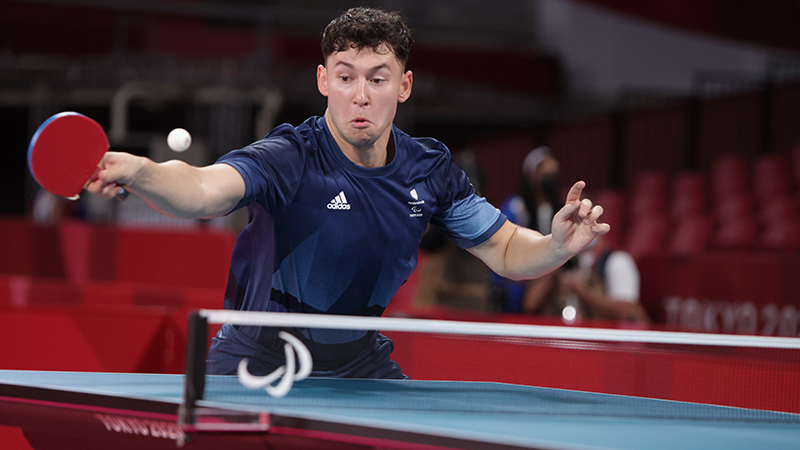 World and Commonwealth champion Ross Wilson secured the first win for the ParalympicsGB table tennis team in the morning session on the first day of the tournament at the Tokyo Metropolitan Gymnasium today, beating Frenchman Clement Berthier 3-0.

You can watch all the action from Tokyo on the Channel 4 website.

Wilson had won both his previous matches against Berthier but the 21-year-old world No 20 has improved a lot since their last meeting in 2017 and had the benefit of a recent competition having won the World Qualification Tournament in Slovenia in June.

Wilson took the first game 11-6 but Berthier led 7-4 in the second before a run of seven points secured the game for the 26-year-old from Minster 11-7.

At 10-7 in the third Wilson had three match points but they all slipped away, and Berthier then had two chances to win the game before the British world No 3 finally clinched the game 14-12 and the match 3-0.

“It is really hard,” said Wilson afterwards, “especially when you are in this environment and you are thinking ‘I’ve just got to win one more point’ and then he comes back and you think you might have blown it.

“He’s a tricky player and for a first game in the Paralympic Games it makes it even tricker. He is quite an awkward style to play against and when you are feeling the nerves a little bit it is quite hard to get into a rhythm. I’m so pleased. It’s an amazing experience coming to my third Games and I told myself that no matter what happens you’ve got to keep the same sort of mindset and that’s what I did today. I really enjoyed it out there.

“I haven’t competed for a year and a half and as athletes that is why we do it – we love to get out there and put ourselves in that moment. I absolutely loved it out there today and I’ve really missed it.

“It was lovely to come out and get the first win (for the team) and kick us off to a good start and I hope that continues.”

McKibbin is also competing in his third Paralympics and broke into the top 10 in men’s class 8 for the first time in 2019. He edged a close first game against the 25-year-old Oceania champion Pellissier 11-9 but then took the next two 11-5 and was understandably very happy with his performance.

“It is really nice to be back out here competing,” said the 29-year-old from London. “My last competition was the European Championships in 2019 and I can’t actually say I’ve ever gone that long without playing a tournament since I started the sport, so I just loved being back out here in this venue.

“It was a good performance. I was a bit nervous about how I was going to perform after so long but when I got out there everything felt like it used to, and I just loved it.

“It is going to get harder and harder each match, but no match is easy. I’ve loved the week out here since we arrived. Preparation has been brilliant – everyone is in good spirits, the team is in a great place and I’m just looking forward to everyone I have to play. I want to be on the table as much as I can to be honest and I’m not fussed who it’s against.

“There isn’t a crowd here but we are used to these conditions and there is a real buzz around the place. Everyone is trying that bit harder, we’ve got family back home who are watching, and everyone is really proud looking out for our results so it 100% feels like a Paralympic Games and it is nice that the first competition back is such a big one.”

Ashley Facey Thompson began his Tokyo singles tournament against the home favourite Koyo Iwabuchi and the Japanese world No 5 made the better start, taking the first game 11-6. Facey Thompson came back to take the next two 11-9 and 11-8 and Iwabuchi then edged a close fourth game 11-9 to level at 2-2. In the deciding game the 26-year-old Londoner saved three match points at 10-7 down to level at 10-10 but the World Championships bronze medallist was not to be denied at his home Games and took the game 12-10 and the match 3-2.

“I played well,” said Facey Thompson, “I was dominating and adjusting my game here and there but it wasn’t consistent enough and that is why I lost. I didn’t believe in myself enough with my shots. He’s a good player; we have played so many times and it is always 50-50 and he took this one so I’ve got to go again for my next two matches.”

“I still feel great and I know I can win my next two matches so I’m looking forward to playing them,” said Facey Thompson. “I’m enjoying it and it’s amazing to be here after 18 months of being in the one hall training; it has been a difficult time but I feel blessed to be here, to be fair.”

On his Paralympic debut, Joshua Stacey could not have had a tougher opponent than the Chinese born London 2012 Paralympic champion and three-time world champion Ma Lin, who now represents Australia. The 31-year-old world No 3 used all his experience against his young opponent and took the match 3-0.

“I don’t think the occasion got to me,” said Stacey, “I’d say it was more that he didn’t allow me to get a foothold in the game. He controlled it from the start and he was very good at dictating and choosing where the game went in terms of the style he wanted to play and it went in his favour.”

“I need to try and do what he (Ma Lin) did from the very first point and just take the initiative,” said Stacey. “He did it to a tee today and his experience was a huge factor. I think if I can take that initiative then it will definitely put me in good stead for the rest of the tournament.”

After winning the World Qualification Tournament in June Sue Bailey (formerly Gilroy) came into these Games in great form and was looking for a first win since the Slovenia Open in 2018 against her arch-rival Borislava Peric-Rankovic, the reigning Paralympic, World and European champion. She started well but lost her focus after being penalised several times by the umpire for her service action and the Serbian took the match 3-0.

“It completely threw me,” said a visibly upset Bailey afterwards. “I’m just so disappointed as I felt so good going into the match but I just became so paranoid about my serve and it completely destroyed my confidence to the extent where I couldn’t play.”

Although not the start she wanted Bailey can still progress to the knockout stages with a win in her second match tomorrow against the former world team silver medallist from Chinese Taipei Lu Pi-chun.