Why table tennis is on the menu at this cafe

Café owner Csaba Feher and his family are using the new lockdown to continue their rediscovered love of table tennis – with what you might call their own ping pong parlour! 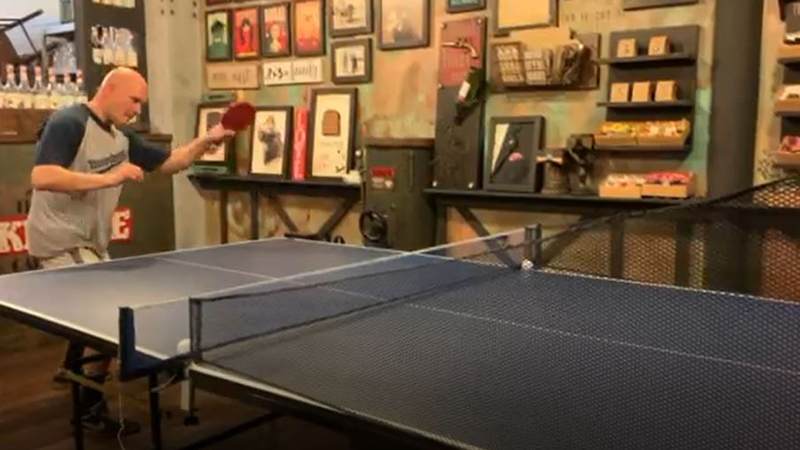 Café owner Csaba Feher and his family are using the new lockdown to continue their rediscovered love of table tennis – with what you might call their own ping pong parlour!

The Cookhouse Café in Hastings is closed at the moment, but the family has replaced the tables and chairs with a table tennis table, complete with robot, so they can keep playing.

Csaba and his wife Adrienn used to play in childhood, and had a table at their previous home in Hastings, but which had been gathering dust in a garage due to lack of space at the café and the flat above.

The couple played regularly on outdoor public tables during the summer – the first time they had played for many years – and enjoyed it so much they joined two local clubs when restrictions were lifted.

Csaba said: “We both played table tennis from childhood, on holidays and at school, just for fun.

“During the first lockdown we realised there was a concrete table in the park, so we started to play every day and we realised we improved our skills quite quickly and all the old skills came back from school.

“We loved it, so we decided we were going to find a club to join when lockdown finished, and we found Tackleway TTC.”

Csaba said the club coaching secretary, Keith Lindsey, helped them to settle in – even though there was one surprise when they started playing matches.

Csaba said: “Keith was very helpful. We’d never been coached or played in clubs before but Keith said we had good skills and he saw something in our game.

“It was a long time since we played. It’s only when we started playing at the club that we discovered matches were up to 11 points, not 21!”

With only one session a week possible at Tackleway because of the restrictions, the couple also joined Hollington TTC so they could play twice a week. They were improving their games and thinking about stepping up to play league matches when the second lockdown came.

Csaba said: “The weather’s not good to go to the park now, so we moved all the tables and chairs and put the table tennis table in the café.

“There’s not much space, it’s very limited, but it’s something for us to play. Actually, we find it quite useful for our game because the reaction time is less.”

With the couple’s children Levi, 25, and Amira, 15, also playing, there are sure to be many family matches in the weeks ahead!