Why Germany practice is perfect for Pitchford

Liam Pitchford believes that missing the European Olympic qualifiers in favour of elite practice opportunities in Germany will help him get in the best shape for Tokyo. 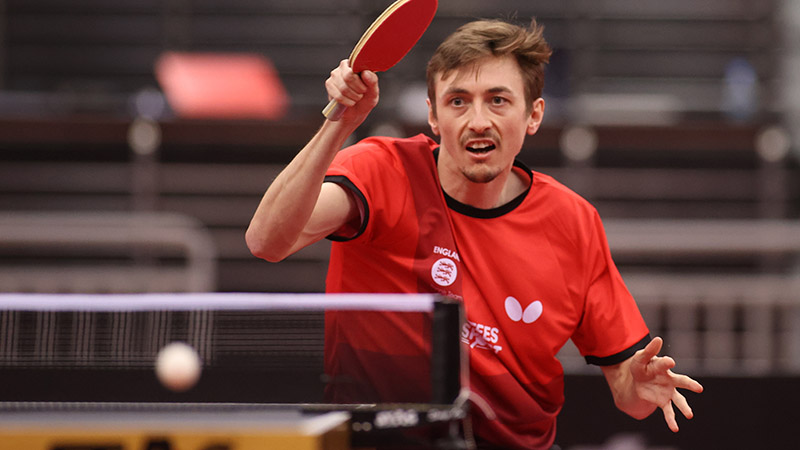 Liam Pitchford believes that missing the European Olympic qualifiers in favour of elite practice opportunities in Germany will help him get in the best shape for Tokyo.

Pitchford, who was beaten in the final at the world qualifying event last month, is certain of his place in Tokyo via the world rankings.

So he has elected not to travel to Portugal for the European qualifiers this month and is instead training alongside a number of leading players, including the Germany squad, in Dusseldorf.

He travelled there after a planned training trip to China ahead of a World Table Tennis (WTT) event there was called off when WTT decided to reschedule the event after the Olympics.

Pitchford, who stayed in Doha after the world qualifying event, said: “I was going to go from Doha straight to China because practice-wise and quarantine-wise it was easier, but they told us they were delaying it again.

“So it didn’t make much sense to stay in Doha and I had to see where it was easiest for me to get to, and Germany was the best option.”

Not that the journey was totally smooth as Pitchford had to show he had elite sport exemption in order to get through the current restrictions on entering Germany.

He said: “I had to get an invitation letter to be able to get on the flight, because I’m not a German resident or have family there.

“Qatar Airways contacted immigration in Frankfurt – it was 5am on Easter Sunday in Germany and I wasn’t expecting them to get anywhere, I thought I’d have to come back the next day.

“Literally 45 minutes before the flight was due to take off, I was still waiting around to check in, but then someone came running over and said they had cleared it.

“I had the letter waiting for me when I arrived and it was all good, then I had to do five days in quarantine.”

Now Pitchford is able to train alongside German stars Dimitrij Ovtcharov and Timo Boll, plus the likes of leading Swedes Kristian Karlsson and Anton Kallberg and Egypt’s world No 42 Omar Assar.

Had he returned to England, his practice opportunities would have been far less – Tom Jarvis and David McBeath are working their way back from long-term injuries and Sam Walker is also regaining fitness after an ankle injury sustained at the world qualifiers. Paul Drinkhall is in France for league matches and he and Walker will then head to Portugal.

Pitchford said: “I know I’m in for Tokyo – I’m going to be the first, maybe second, on the list from the world rankings when it comes out.

“I made the decision (to miss the European qualifiers) when I thought I was going to China to train with the national team. When that didn’t happen, it made sense to come here and get some good practice in.

“It’s good to play matches, but I don’t feel I’m at that point where it’s crucial. I know I need to put the work in in the practice hall right now if I want to play well at the Olympics.

“I want to be in the best shape for the Olympics, that’s the goal for this year. They’re all top players here, so I’m going to base myself here and see what happens and what sort of restrictions there are in a month’s time.

“I don’t want to go back to England and get stuck there because we don’t know what’s going to happen, and also I wouldn’t get much practice there.

“Obviously I’m going to go home at some point, but as long as I’m here and able to practise, I’m happy with that.”

Pitchford missing the European qualifiers does open up an unexpected chance for Walker to qualify, though only one of he and Drinkhall would be able to join Pitchford in Tokyo as each nation is limited to two singles players in each gender. If both were to seal a qualifying slot in Portugal, Drinkhall would get the nod as the higher-ranked player.

Pitchford said: “I’d love it if Paul or Sam were out there in Tokyo as well. It’s not easy qualifying at those events. Sam’s probably not had the best run-up to it, but I’m sure he’s going to try to grab his chance.

“Paul is going there quite highly seeded and with a chance to qualify. He could have a chance on ranking as well, but I’m sure he’s not thinking about that and will be fully focused on qualifying.”