Whitgift wait on Smith ahead of team finals

Five teams aim to defend titles they won last year – and three of them could make it a hat-trick – at the Butterfly School Team Championships in Hinckley this weekend. 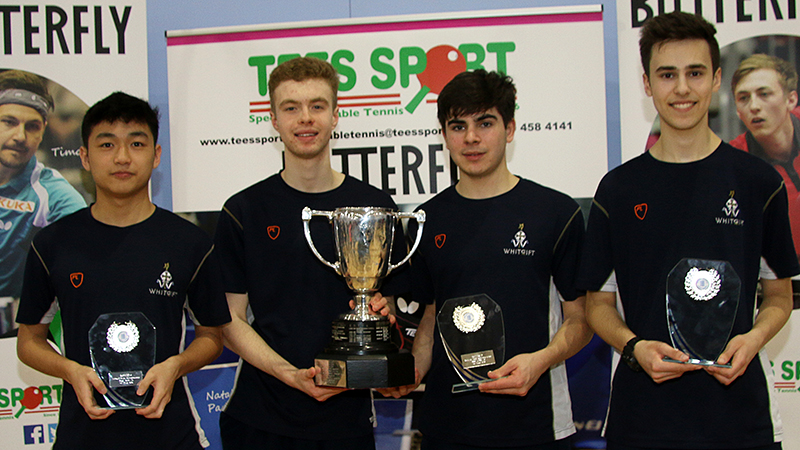 Five teams aim to defend titles they won last year – and three of them could make it a hat-trick – at the Butterfly School Team Championships in Hinckley this weekend.

Among them are Whitgift School in the Under-19 Boys, though their fortunes may depend on whether team lynchpin James Smith gets back in time from competing in Italy.

Smith is involved in individual and team events at the Italian Youth Open, where the individual events finish on Thursday and the team group stage on Friday, but the team knockout rounds are on Saturday.

If he is still involved at that stage, Smith will not make it back to England in time to help Whitgift’s cause and that could open the door for a strong-looking Grantham College to wrest the trophy away from the Croydon school and deny them their treble.

The other two-time champions looking for a hat-trick are also in the boys’ competitions – St Mary’s College, Hull, in the Under-13s and St Peter’s CE Academy, Nottingham in the Under-11s.

St Mary’s will fancy their chances of winning in the Under-16 Boys as well, though it looks to be quite an open competition in which all four teams will feel they can hold their own.

On the girls’ side, the defending champions are back in the U11s – Greenway Primary and Nursery School, Berkhamsted – and in the U16s, where Charles Read Academy will again be the favourites.

There will be new champions in the Under-13 Girls and also in the Under-19 Girls, another competitive-looking category in which Grantham College (Sarah Menghistab, Sophie Barlow) and The College of Richard Collyer (Kate Cheer, Alice Hazell) will probably contest top honours.

The teams competing are: