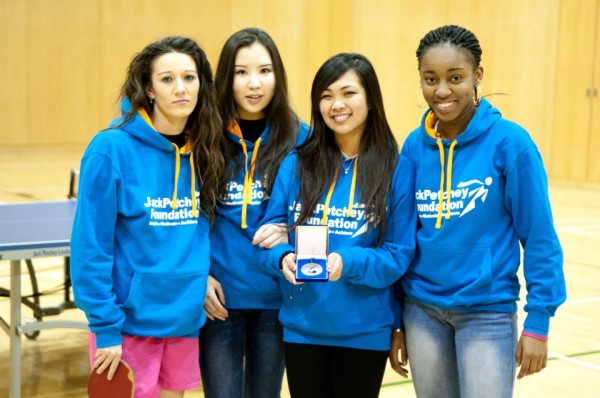 Several years ago the City of Westminster College did not even have the equipment required to play table tennis. On March 23rd this year the college’s under-19 girls’ team narrowly missed out on being crowned national champions!

The team finished second in the Butterfly national competition, missing out on the top prize to Kesteven & Grantham Girls’ School from Lincolnshire, who have won the competition for an impressive 5 consecutive years! The finals were held at Hinckley Leisure Centre, and with the Horsforth Team from Leeds unable to attend due to the artic weather, three teams were competing to be crowned under-19 national champions. Westminster girls edged the Morpeth School to second place by 229 points to 227, a result which required a count back on points after a 4-4 draw.

Westminster College introduced the sport after receiving tables through the Jack Petchey Table Donation Scheme; a project designed to encourage the active participation in the sport in schools and clubs across London. After gaining a following, the college entered teams into the Jack Petchey London Schools Table Tennis Championships. The under-19 girls’ team came through the regional competition in flying colours in order to reach the national finals.

Their achievement is no mean feat, and their progress and accomplishment is something that shouldn’t be taken lightly! The skill required to be a successful table tennis player can often take years to master and yet the four team members, Amber Bleasly, Namu Ujin-Natsagnyam, Qwen Bulosan and Jillian Allen had never played competitive table tennis before forming the team. Their coach Lennox Brown said, “All the Enrichment Team – and I personally – are so very proud of each individual journey and the personal battles overcome by our team. This has culminated in a success that I hope Amber, Namu-Ujin, Gwen and Jillian remember for a very long time to come – proving just how much can be achieved when you refuse to quit.” Lennox’s comments echo Jack Petchey’s life-guiding dictum, “If you think you can, you can.” Next year the girls hope to challenge Kesteven & Grantham for the title!