Weerasinghe and Ho take the titles 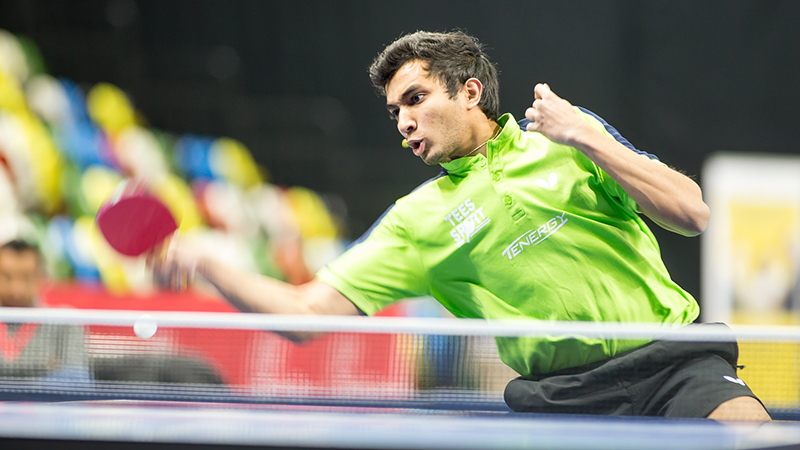 Click here for full results from the first day, plus the schedule for the rest of the competition

The two finals at the Copper Box Arena were both repeats of the last two years. But the outcome in the men’s final was different as Weerasinghe defeated defending champion Tom Jarvis in a decider to finally get his hands on the trophy.

Jarvis had beaten the Tonbridge player in the last two finals, while Sam Walker had also done so in 2015 and, in his last year at this level, it was a case of last chance saloon for Weerasinghe.

He was delighted to finally get over the line after a few near misses and said: “Going into the final, I was thinking ‘just play and don’t give him anything easy’.

“I stuck to my gameplan pretty well and was aggressive on the first ball. Everyone knows Tom’s backhand is very strong, so I was conscious of that and tried to vary my play so he couldn’t be aggressive.

“I lost three finals in a row, so to win it in my last year is very special.”

Jarvis was magnanimous in defeat, saying: “Well done to him for finally winning it. We’ve played loads of times and both know each other really well and he played good tactics and a really good match.”

In the women’s final, it was another familiar pairing. Maria Tsaptsinos and Ho have met at this stage several times before, Ho winning last year and Tsaptsinos the year before.

Was it the latter’s ‘turn’ this year? It looked that way when she led 2-0, but Ho fought back to lead. Back came Tsaptinsos with the sixth, but a missed forehand by Tsaptinos at 7-6 down in the decider arguably proved crucial as Ho took the next three points to ensure she kept hold of the trophy.

Ho, who has more than 40 national titles through the age groups, said: “I think we just know each other’s games so well and we’ve played in so many finals, there’s a mental aspect too.

“She played well – I struggled when I received half-long and she got in. I was under pressure but I managed to turn it around with a bit of luck as well.

“Every title has equal value, so I’m really happy to win.”

Tsaptsinos’ verdict was: “It was very, very close. I think throughout the day I worked my way up to play near my maximum.

“It was quite tactical and strategic but it just slipped away at the end. There were a few opportunities I didn’t take, but she played well.

“I’m happy with the way I played, but obviously I’d have liked to win in my last year as an under-21.”

Earlier, in the men’s quarters, Sam Mabey came from 2-1 down to upset third seed Josh Bennett in six, while Luke Savill, who had been 3-0 up against Shayan Siraj, saw his younger opponent take the next two before he was able to close it out in the sixth.

In fact, none of the quarters were decided in four straight – Adam Jepson took a game off Weerasinghe and Ethan Walsh took one off Jarvis.

By contrast, all the women’s quarter-finals were all over after four games – Ho against Mollie Patterson and Emily Bolton against Megan Gidney featuring closer game scores than Charlotte Bardsley’s victory over Sarah Menghistab or Tsaptsinos’ defeat of Bethany Farnworth.

Ho continued her record of not dropping a game as she saw off Bardsley in the semi-finals, but Tsaptsinos had to fight past Bolton, who twice levelled the score before the senior England player made sure in six.

The group involving Denise Payet, Charlotte Bardsley and Megan Gidney was an eye-catching one before a ball was hit, and when the much-improved Gidney beat Payet in five, it began to live up to expectations.

Bardsley prevailed in three against Gidney – the first two going to 12-10 – meaning Payet had to beat Bardsley to stay in the competition. Payet took the lead, but after Bardsley had shaded the second 13-11, she pulled away and sent her Team World Cup squad-mate tumbling out.

Tin-Tin Ho, the defending champion, won her three matches at a canter, but there was nearly a shock for Maria Tsaptsinos, champion in 2016 and beaten finalist last year.

Tsaptsinos won her first match easily enough against Sarah Menghistab and was 2-0 up against Kate Cheer, only for Cheer to battle back and level. But the senior England player re-found her form and won the decider. Menghistab’s win over Cheer took her through to the quarters.

The final group saw Emily Bolton and Mollie Patterson come through as expected.

In the boys’ groups, there were no alarms for the top two seeds Tom Jarvis and Helshan Weerasinghe, who have contested the last two finals.

Jarvis overcame both Gabriel Achampong and Shayan Siraj in three straight, though Siraj took him to deuce in the second, while Weerasinghe lost his first game of the day to Sam Mabey, but then won nine in a row, his other opponents Mitchell Jones and Joe Clark.

The other two groups saw upsets as the fourth-ranked players went through with the top seeds.

In group three it was Cambridgeshire’s Adam Jepson who finished second, beating James Hobson and Shaquille Webb-Dixon. And he very nearly added the group’s top seed Josh Bennett to the list, eventually succumbing 11-5 in the fifth having saved match points in the third on his way to taking that game 15-13. Bennett was also taken to five by Webb-Dixon, claiming that one 3-2 (11-8, 7-11, 13-15, 11-5, 11-9).