Amazing footage of some of the early greats of table tennis can today be broadcast publicly for the first time in more than 90 years. 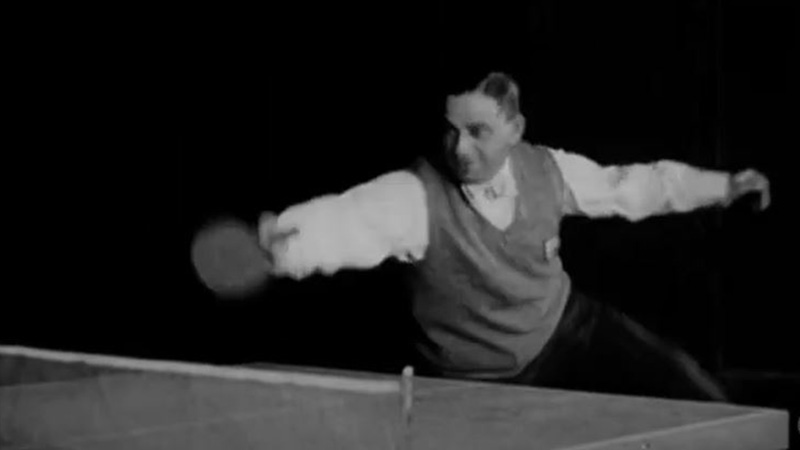 Amazing footage of some of the early greats of table tennis can today be broadcast publicly for the first time in more than 90 years.

Table Tennis Today is a silent film released in January 1929 by Ivor Montagu, one of the founding fathers of the sport in England, who was also a pioneering film-maker.

It was rediscovered after months of diligent research by John Ruderham of the Bristol & District League, and Table Tennis England has purchased the rights to show it publicly to co-incide with our Centenary celebrations.

The film explains the basic rules of the sport to the audience and features slow-motion analysis of different shots – a cutting-edge film technique at the time.

Among the players showcased are Fred Perry, who became England’s first world champion later in 1929, the 1928 world champion Zoltan Mechlovits of Hungary and Percy Bromfield, who was English champion in 1904 – the last season before the sport temporarily died off – and again in 1924, after the resumption.

John Ruderham became aware of the film’s existence when he came across a 1929 newspaper cutting from the Yorkshire Post & Leeds Intelligencer and set about trying to find out whether it had been preserved.

He discovered that the British Film Institute (BFI) had it on file but the story did not end there as he had to track down descendants of Ivor Montagu – which turned out to be quite a quest – to ask for the family’s permission to purchase the film from the BFI.

John said: “To begin with I never expected the film to still be around. If it was, I would have thought that it would at least be available on the British Pathé News website, but it wasn’t.

“Knowing that this year was also TTE’s Centenary, it therefore made it even more imperative that I try to find a copy if one did still exist. When I discovered there was indeed a copy held by the BFI, it was just an amazing feeling to think that this footage may not have been seen by anyone in nearly a century.

“However, that was also when my long journey began trying to make contact with a descendant of Ivor Montagu in order to secure the rights, and eventually doing so was the icing on the cake and I will always be indebted to Charles Montagu for his help during this process.

“I am also just so pleased that everyone is finally able to view this rare and precious film at last, if they wish, and especially so in our Centenary year.”

John’s full account of this amazing story is attached at the foot of this page.

Table Tennis England Chief Executive Sara Sutcliffe said: “This is a tremendously exciting find and we’re indebted to John Ruderham for his tenacity in tracking it down and obtaining a copy.

“It’s quite a coup that, thanks to him, we are able to release this historic footage at the start of our Centenary season, and to enable current and future table tennis fans to enjoy it.”