Sam Walker helped to mark the countdown to the 2022 Commonwealth Games in Birmingham today as the venues and participating sports were officially announced. 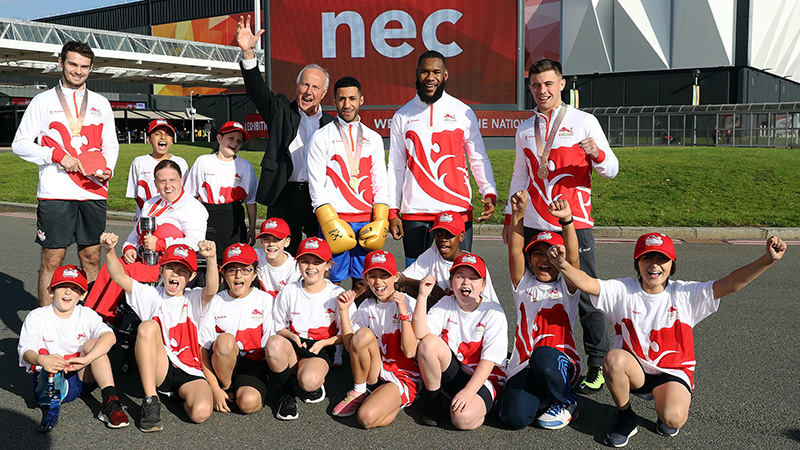 Sam Walker helped to mark the countdown to the 2022 Commonwealth Games in Birmingham today as the venues and participating sports were officially announced.

A team medallist at the last two editions of the Games, including at Gold Coast this year, Walker joined fellow Team England stars, Birmingham 2022 Chairman John Crabtree and pupils from Mapledene Primary School at Birmingham’s National Exhibition Centre – the table tennis venue for the Games.

Crabtree said: “We were thrilled to welcome local schoolchildren and Team England stars to help celebrate the confirmed sport and venue programme for 2022.

The 22nd edition of the Commonwealth Games will feature 11 days of competition in 17 sports from July 27 to August 7, 2022. More than one million tickets will be available. Taking place at the NEC, alongside table tennis, are badminton, boxing, judo, weightlifting and wrestling.

The sport programme for Birmingham 2022 includes all mandatory sports and disciplines as per Commonwealth Games Federation rules, as well as an approved selection of optional sports chosen by the local bid committee: Diving, 3×3 Basketball and Wheelchair Basketball, Mountain Biking, Track Cycling and Track Para-Cycling, Rhythmic Gymnastics, and Para-Triathlon.

Organisers have committed to ensuring that the 2022 edition builds on the Commonwealth Games’ track record of inclusive para-sport and gender equal medal opportunities, although para table tennis is not – yet – among the included sports.

The Organising Committee is currently conducting a review to look at the possibility of including additional sports, with para table tennis among those invited to make a bid for inclusion.

Commonwealth Games England Chairman Ian Metcalfe said: “The Birmingham 2022 Commonwealth Games will be an incredible opportunity for Team England to build on the English sporting pride that we saw on the Gold Coast. Our athletes will benefit from the power and support of a home crowd while competing in world class venues in Birmingham, the West Midlands and England.

“The diverse selection of sports reinforces the Commonwealth Games’ track record for inclusive para sport and gender equality; values that are extremely important to Team England.”