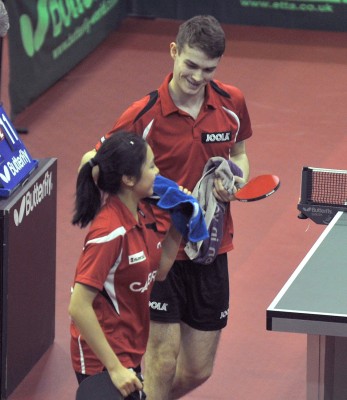 Sam Walker and Tin-Tin Ho erased the bitter memories of their respective under-21s final defeats yesterday by combining to devastating effect in the mixed doubles to win their maiden mixed crown.

Both players had painfully fallen to defeat late on Friday evening in the under-21 finals – Walker to Gavin Evans and Tin-Tin to Maria Tsaptsinos, so they were determined to make amends on Saturday morning at the senior events kicked-off.

Their progress was matched by the other top seeds as a mouth-watering quartet was set up for the afternoon semi-finals. Favourites and top seeds Liam Pitchford and Kelly Sibley, who won both their previous matches 3-0, faced David McBeath and Emma Vickers, who had fluctuating fortunes with a one-sided 3-0 quarter-final win over Chris Doran/Hannah Hicks coming after a huge battle with Mark and Sarah Short which they scraped through 3-2.

In the bottom half of the draw Walker/Ho were set to face previous champions Paul and Joanna Drinkhall, who had seen off a spirited challenge from Tom Maynard and Maria Tsaptsinos 3-1 (11-7, 6-11, 11-6, 11-7).

This set up a real surprise final but one that was full of quality from the off. Walker and Ho burst out of the blocks into a 5-1 lead but were pegged back in two spectacular rallies, first at 9-6 when Vickers brilliant read of the play allowed her to steal in a sharp forehand to an open table and then secondly at 10-8 when McBeath fired a lovely forehand straight down the line. However, despite their best efforts a fast spin serve from Ho meant the younger duo stole a 1-0 lead with a tight 12-10 game.

There was a tense start to the second end with neither pair able to gain momentum until Walker and Ho raced through seven consecutive points to accelerate from 2-3 to 9-3 – effectively securing a 2-0 lead.

Soon after, the match was over as the losing under-21 finalists avenged their fruitless Friday with a storming Saturday by sweeping the third game 11-4 and earning a maiden success in the Steel City.