Walker and Jarvis settle for second in Dusseldorf

Sam Walker and Tom Jarvis are beaten in straight sets by Japan’s Yuta Tanaka and Jo Yokotani in the doubles final of the WTT Feeder event in Dusseldorf. 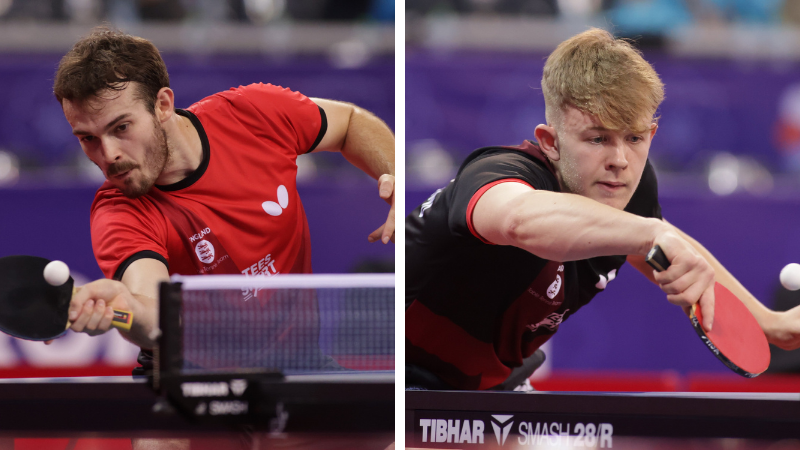 Sam Walker and Tom Jarvis were beaten in straight sets by Japan’s Yuta Tanaka and Jo Yokotani in the doubles final of the WTT Feeder event in Dusseldorf.

The Japanese pair opened strongly with the first point, looking like they weren’t going to give much away in this final against Walker and Jarvis.

The English pair responded well, especially with Walker’s excellent touch play to lead the first game right up until they were overcome by their opponents at 6-5.

Jarvis struggled to impact the first game until very late on with some fantastic rallies to get the English duo back on level terms at 9-9. However, they went on to narrowly lose 11-9.

The second game proved more difficult, going 5-1 down very quickly with a series of unforced errors. The Japanese pair looked calm and collected in their 11-3 victory.

Walker and Jarvis came back fighting in the third, staying with their opponents at 3-3, 4-4, 6-6 and then took the lead with a fantastic combination of play from Jarvis’ service.

They couldn’t hold the lead for long as the Japanese pair turned it round to 9-8 and after another mistake from Walker they were given a match point opportunity, which they took and made the third and final game 11-9.

Walker and Jarvis had a strong tournament in Dusseldorf, breezing through to the final winning 3-0 in the quarter-finals and 3-1 in the semis. It was also Tom Jarvis’ first ever senior final on the international circuit which will prove invaluable as he continues to progress.